Chapter 56 of Jesus Josephovich: The Revolution

Published by RChandlerBrown on October 2, 2013 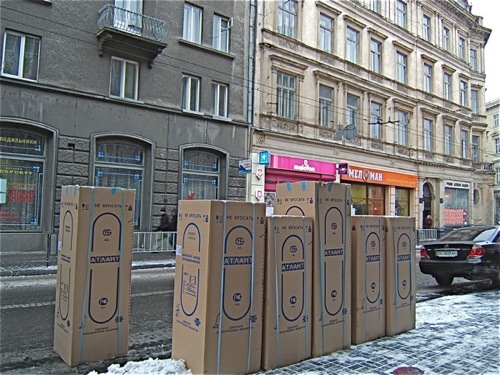 After fighting through traffic that was causing problems for thousands of motorists for no real reason at all, the green Volkswagon finally pulled into a massive parking lot with hundreds of other cars all spread out before a giant glowing sign that read “MEGA”. Waves of patrons moved in and out of a row of doors beneath the sign like ants carrying their day’s plunder.

“What is that building?” the Jesus Josephovich wondered as he stared at the warehouse sized structure.

“That’s one store?” the foreigner replied.

“What do they sell there?”

“They only sell food? It is larger than most temples,” Jesus Josephovich noted.

“And it probably gets more visitors than most temples,” Abraham joked. “It certainly makes more money.”

They parked the car near the rear of the parking lot and had to walk half the length of a football field to reach the entrance. They joined a swarm of people pushing and shoving their way through the narrow set of double doors that flung open and shut with the wind.

Inside the building Jesus Josephovich paused in awe as he took in the size of the structure. The ceiling towered above them like a steel sky and the aisles appeared at first glance to extend forever.

As large as it was, the aisles were completely packed with shoppers. Many of them pushed carts in front of them that were the size of a small car, yet they still managed to load them with so much food that their items formed a mound that threatened to topple over the edges of the oversized baskets.

“What do people need so much food for?” Jesus Josephovich wondered as an older woman passed them pushing a particularly overloaded cart.

“I guess they like to stock up,” Abraham considered. “Or maybe they’re having a party.”

“You could feed five thousand people with less food,” Jesus noted as a cart filled with fresh bread and fish fillets squeaked by.

“Or my whole village in Africa,” Abraham added. “You should see the parties we have in Nigeria. Hundreds of people show up, and that’s just family.”

Abraham grabbed a giant shopping cart and headed down one of the large aisles that were filled with food products 15 feet high. They began grabbing large boxes of food off the shelves as Abraham directed. Jesus Josephovich was amazed at the size of the containers. Each box appeared to contain several items. Apparently it was not enough to just buy what you needed. You had to buy ten of everything.

The strange foods that he saw lining the aisles amazed the foreigner. Almost all of them seemed to be unnatural. Boxes and bags of chips and snacks or candies covered in plastic. The people who made these foods must have been more interested in covering the outside of their packages with beautiful designs, than with putting anything of actual value inside the containers.

They made their way aisle by aisle, piling the food higher and higher in their cart as they went down the list of things that Elena needed to make her big meal. The foreigner wondered if their cart would get piled as high as the others around them.

As they reached the end of the last aisle, Abraham heard a shout and stopped.

“Abraham!” A voice behind them called.

A young African man with a small beard hugged Abraham as the native shoppers walking past them observed the pair with interest.

“Let me introduce you to a friend of mine. This is Tai-ye-wo,” Abraham said with emphasis.

“Nice to meet you.” Jesus Josephovich hugged the young man, which brought even more odd looks from the surrounding shoppers.

“His name means ‘The First to Taste the World’,” Abraham said with a laugh.

“Haha, yes,” Taiyewo replied. “I am a twin,” he confessed. “In my tribe when a family has twins, they name the first child this. It is a tradition because there are many twins in our tribe.”

“More than in any other tribe in Africa,” Abraham added. “They like to have two of everything,” he joked.

“Haha, that’s right. One is not enough,” Taiyewo admitted. “We are ambitious people. We want it all.”

“Well, you should be able to find everything you need in this place,” Jesus Josephovich said glancing at the cavernous ceiling.

“Exactly,” Taiyewo said. “This is what I want. I want my life to be Mega. Bigger than life.”

“What are you looking for?” Jesus Josephovich asked.

Taiyewo showed them his basket. It will filled with chemicals and dyes. “You know, I am buying things to make some new designs. I am an artist.”

“Are these for your t-shirts?” Abraham wondered.

“Some of them, yes,” said Taiyewo. “I want to mark each of my creations with a special stamp. Something that people can only get from me. There are so many Nigerians selling clothes in the street markets that I want mine to be unique.”

“Taiyewo is an excellent artist,” Abraham said. “But of course, like all good artists at one point in their lives, he has no money. So now he sells t-shirts.”

“Yeah, but not like these other guys. Most people just buy a bunch of clothes from China and sell them on the street. Not me,” said Taiyewo. “I use my clothes as creative inspiration.”

“Truth cannot be hidden,” Jesus Josephovich said. “Your creativity is a part of your true being. It cannot be silent for long.”

“You’re exactly right man!” Taiyewo said enthusiastically. “If I didn’t let my creativity out, I would go crazy. I just wish I had more money so I could be more creative. I’ve got so much in here that wants to get out,” he said pointing to his head, “but I just don’t have the time and money to be as creative as I want to be.”

“Be careful not to confuse financial success with artistic success,” Jesus Josephovich advised. “Many people think that they have not fulfilled their purpose in life if they have not made a lot of money, and they miss the blessings that God has given them. God is the ultimate creative being. It is possible that he created you simply to create one t-shirt.”

Taiyewo laughed. “That would be great, eh? I design the perfect t-shirt and then my life’s purpose has been fulfilled. But I don’t just want to create these things for myself. I want the whole world to see my creations.”

“Why?” Jesus Josephovich asked. “Why is it necessary to be big?”

“Because if you’re big, it means you did something right,” Taiyewo answered. “It means you really are a good artist.”

“Are you sure about that?” Jesus Josephovich questioned.

Abraham and Taiyewo looked at each other. “I think so,” Taiyewo argued. “If you are successful, then your art connects with a lot of people.”

“But does that mean that what you created is of the highest quality?” Jesus Josephovich inquired. “Look around you. Look at the products in this store. This place is enormous and it has everything that you could ever need in it. But is this what you really want in your life?”

“What do you mean?” Taiyewo asked.

Jesus Josephovich grabbed a box of fruity candy off the shelf next to him. “Look at this food. Man has spent an enormous amount of time and money trying to create something that tastes sweet. But nature grows fruit out of the ground that is sweeter and healthier than this without any input from man. The simplest farmer can grow things that are better than all of this.”

“Good, but that’s not the point,” Jesus Josephovich said. “The point is that nature’s creation provides the farmer with everything that he needs. It fulfills him. And if he has extra, he gives it to his neighbors and fulfills them as well. In this way, everyone’s needs are met. No one is hungry. Nature is abundant.”

“You don’t need money,” Jesus Josephovich said. “Money is simply a form of energy. There are many other forms as well. What you need is a source of abundance.”

“Those who seek only money never find abundance,” Jesus said. “When you create, you are creating out of abundance. But it does not come out of the abundance that your physical being has accumulated in this life. No, that kind of wealth is merely temporary and has no creative force. When you create, you are drawing from the abundance of the creative spirit that gives life to all things, and this is an infinite and eternal abundance that can never diminish.”

“You know it’s interesting,” Taiyewo replied after a moment of consideration, “when I am creating something beautiful, I am not thinking,” he said. “It feels like I am channeling something greater. A power that is outside of myself. That’s why I became an artist. I didn’t want to lose that feeling of connection with something bigger.”

Jesus Josephovich smiled. “The nature of the entire universe is abundance. There is more pure energy in a handful of stones than in all the efforts you will make in your entire life. You must tap into that abundance, but in order to find it you must stop looking without. The true source of abundance is within.”

“What does that mean, it’s within me?” Taiyewo asked.

“That is the secret of who you really are,” Jesus Josephovich told him as he touched his shoulder. “You spirit is connected to God, the creative source of all things. Your spirit can channel the infinitely creative force in the universe. Your spirit is also connected to your fellow man. Let the creativity of God flow through you in all things. Not merely your shirts and art, but in everything you do, every minute aspect of life. Live every moment inspired. Then you will truly fulfill God’s purposes and you will yourself be filled to overflowing.”

Taiyewo was transfixed at the thought of infinite abundance flowing through him. The moment Jesus touched his shoulder he felt that familiar feeling of creative intensity that he always felt when he was making art. It began to flow through his mind and into his heart and suddenly it seemed to fill his whole being. Energy was flowing through every cell of his body and even beyond his body. An extraordinary amount of energy pulsed through him, and as he traced it back to its source within himself, he realized that it spread out from him like a web into the ground and sky and the air around him.

The energy was flowing in and out from all directions at once. He was at one moment the conduit through which the energy flowed and at another moment the source of the flow. It was a connection to everything in the universe and he understood for the first time that he was not alone and he had nothing to fear. There was a source of infinite power that he could draw from and of which he was an eternal part.

“Who is this guy?” Taiyewo asked Abraham, amazed by what he had just experienced.

Abraham laughed. “He is a man who makes every moment as full as possible.”

“I believe it,” Taiyewo replied. He pointed to the nearly full shopping basket. “It looks like he’s going to make a lot of people full for supper tonight.”

Jesus Josephovich smiled. “He who eats this food will be hungry again. He who consumes truth will be filled to overflowing.”