Chapter 54 of Jesus Josephovich: The Revolution

Published by RChandlerBrown on October 1, 2013 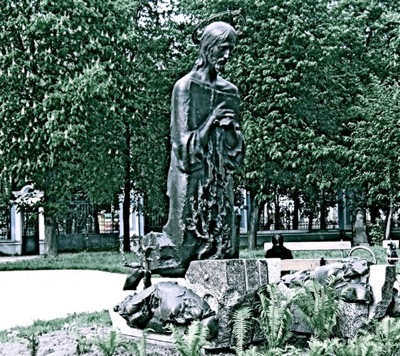 When Jesus Josephovich came out of the hacker’s apartment, the Oligarch was waiting for him in his private car listening to whatever noise passing for pop-music had been released on the radio that week. The driver opened the door for Jesus and he took a seat next to the intrigued Oligarch.

“So,” the Oligarch said. “What did you think of the capabilities of our friend?”

Jesus Josephovich smiled kindly. “Kolya is a wonderful young man. He is going to be of great benefit to his family and to the community.”

The Oligarch squinted his eyes in confusion. “I mean, what do you think of our offer. We can make you a Ukrainian citizen. We can make you Mayor of Kiev!” He spread his arms wide encompassing the entire back of the car. “Or we can turn you over to the authorities as an illegal immigrant with no identification. The choice is yours.”

The foreigner merely grinned. “Come to dinner with us tomorrow night, and I will tell you what I am going to do.”

The Oligarch smiled and directed the driver to take them back to Volodomir’s apartment. He assumed that the foreigner’s calm attitude was evidence that he had decided to join the Oligarch and his political machine.

Jesus Josephovich and the Oligarch parted ways with two very similar, yet very different things on their minds:

As he left the car Jesus Josephovich thought about all the good characteristics of his new friend and about how those positive things in his life, his tireless work ethic, business cunning, and substantial financial success, could help thousands of people around him if only he would get rid of the few blemishes in his character and ego that were holding him back from his real purpose in life. Jesus could honestly say that he loved him, especially when he considered his true potential.

The Oligarch also considered the many positive things about the strange foreigner he had met, but he could only think about how he could use this man’s popularity to his own benefit, regardless of what might happen to the foreigner or to the larger community. He loved the idea of controlling a powerful ally. He really loved the idea of being in control.

“Oh, hello,” she said, letting him through the door, then quickly shutting it behind her to keep too much cold air from coming in. Compared to the wintery cold outside, their apartment was a sauna.

“Are you alright?” Jesus Josephovich asked her, noticing her tenseness.

“Oh, I’m fine,” she answered instinctively. “Just a lot on my mind.”

“You know what helps me when I have a lot on my mind?” Jesus Josephovich asked. “Singing.”

She smiled meekly, and the foreigner began whistling a cheery tune.

Suddenly her face turned grim and she almost grabbed the thin foreigner by the arm. “What are you doing?” she yelled.

Jesus Josephovich paused and stared at Elena’s frantic face, which appeared to be twisted in pain. “You don’t like my song?”

“You’re whistling!” she announced, as if it were an act of pure evil. “You can’t whistle indoors! It’s a curse!” she explained.

“Oh yes,” he replied, remembering the Oligarch’s similar response. “That wealthy businessman told me the same thing.” The foreigner was amused that the wealthiest man in the country and a typical Ukrainian housewife would react the same way to the superstition about money.

“If you whistle indoors, your money will fly out the window,” Elena declared with complete gravity. The fear in her voice told Jesus Josephovich that this was more than just an old Slavic superstition. It was connected to something that she was worried about right now.

“Really?” Jesus said. “And why are you so worried about money? Do you think that God will not provide what you need?”

Elena sighed and sat down at the kitchen table. “Volodomir is not making as much money at his job as he hoped, and we just have so many things to think about. Sometimes I think God cares about us, but he doesn’t pay much attention to all the details happening in our lives.”

Jesus smiled at the wisdom hidden within her remark. “And why do you think that is?”

“I don’t know,” she said, shaking her head in defeat. “I pray to God every day, but sometimes I don’t think he’s listening. I’ve tried everything that the priests tell us to do. I always wear a shawl over my head and dress humbly when I go to church, I bow three times and make the sign of the cross at every door and every icon, I buy candles from the sisters and light them on each of the altars for Mary, John and…” she cleared her throat, “Jesus.” She grinned nervously. “ And I never miss a church service.”

The foreigner looked impressed. “Sounds like prayer is hard work.”

“It is!” she admitted. “If I can’t go to the church building I put on my shawl and kneel on the ground in front of our icon of Mary to pray.”

She pointed to a small gilded Orthodox painting of Mary holding her baby on the mantel. The style of painting was very old, and the images looked barely human, like a photograph that has aged so much it no longer resembles its original subject.

“I kiss the icon and kiss the cross around my neck,” she continued, “and I say the Lord’s prayer. Then I add specific requests, usually about Volodomir and the children.”

“And about money?” Jesus inquired.

Elena lowered her head in shame at her admitted selfishness, then grabbed Jesus’ hands.

“When you were a child, did your parents give you everything that you asked for?” Jesus Josephovich wondered.

“Could there have been any other reasons that your parents might not have given you something you asked for? Do you ever ignore your children’s requests?”

Elena took a deep breath and nodded. “Yes. Sometimes my children ask me for things that I know won’t be good for them. Like candy or when they want to play outside without a hat or gloves.”

“Maybe you were actually better off not getting some of the things you asked for as well,” the foreigner suggested.

“Well, maybe I didn’t really need all the things I wanted,” she conceded.

“You know everybody prays for money,” Jesus Josephovich said. “We all think that money is going to solve our problems, but rich people have more problems than anyone I know. I just spent time with an Oligarch, and I saw that he was a man who is never at peace. His only peace is pleasure, and pleasure lasts but an instant.”

Elena opened her eyes wide. It was difficult to imagine that millions of dollars wouldn’t bring some sense of peace to her life.

“What you’re really looking for is a sense of security,” Jesus Josephovich explained. “You hope that more money will give you that security.” He looked her straight in the eye. “It won’t,” he promised.

Elena sighed. “I know,” she said. “Somehow I’ve always known that money would not bring me peace. But I thought it would at least make the problems in life easier to deal with. I thought it might bring us a little more pleasure.”

“Money is not going to work,” her guest told her. “Pleasure simply creates a desire for more pleasure. It does not lead to peace. Security cannot come from a physical object outside of yourself. It can only come from something within.”

“What is that?” Elena asked.

“But how can God give me more peace?” she asked humbly.

“But I told you, I pray every day and it doesn’t work!”

Jesus Josephovich nodded in agreement. “Why do you think that is the case?”

Elena raised her hands in frustration. “I don’t know. Maybe I don’t know how to pray correctly.”

“You know how to pray,” Jesus said. “But you are confused about when to pray.”

Elena stared at the foreigner for a long moment, trying to understand what he was saying. “Should we pray in the morning? Before we sleep? Should we pray before we eat anything, or just large meals? What about at celebrations? What am I missing?” she pleaded.

Jesus Josephovich put a comforting hand on her shoulder. “You think that when you say, “Father, Hallowed be your name”, that you are starting a prayer. You believe that you should end your prayers with the phrase “Amen”. And you imagine that the words between those phrases are the only things that God considers prayer.”

Elena paused to consider this. “What is prayer then?” she wondered.

“Prayer is talking to God,” Jesus Josephovich answered plainly. “It is when we bring our requests, concerns, and questions to our Heavenly Father. It is when God listens to us… and he is always listening.”

“Always?” she asked with trepidation.

“Always,” Jesus said with a knowing grin. “You believe, and often hope I’m sure, that the words you speak during times not designated as “prayer” are not being listened to by the Creator of the Universe.”

“But I tell you this: every word you speak is prayer. Every thought is meditation. Every breath breathes the spirit of heaven. God hears all. God knows all. God is with you at every moment of every day. He hears your words, righteous and wicked. So beware your sinful words and thoughts. Be careful that you do not wish more wickedness into this world than you pray for good things. For the wickedness you wish upon others will come, and it will come into your own life.”

“Are you sure?” she questioned with fear in her voice. “He listens to everything we say? Even our thoughts?”

“Do you think you are so far from Heaven that God cannot hear you?” Jesus Josephovich walked over to the window and opened it, letting in the freezing winter air. He looked up into the massive gray clouds hovering over the city.

“God sees the same sky as you,” he said as he looked up into the clouds. “Only, when he looks at the sky it is filled with Angels.” He paused and smiled at the clouds as if greeting an old friend. “So it is with your sky, yet only those with eyes to see can see it.”

“I’m not sure I want to see that,” Elena confessed.

“You don’t need to see it,” Jesus Josephovich said. “Believing is enough. Just remember this: Every word is a prayer. Therefore, let your words be holy, for God is listening, and not only God, but every Angel in Heaven as well.”

Elena thought deeply about what the wild-haired foreigner had said. It challenged everything she had ever thought about the separation between her life and her religion. She slowly walked over to the window and looked up at the clouds. Not seeing any angels, she closed the window shut tight, double checking to make sure no cold air was coming through.

She walked back to the kitchen table and sat down silently. She stared at Jesus Josephovich as he analyzed her expression.

“Are you okay?” he asked once again.

Elena smiled. “Yes, I’m just being careful. If every word is a prayer, I don’t want to mess up!”