Chapter 52 of Jesus Josephovich: The Revolution

Published by RChandlerBrown on September 30, 2013 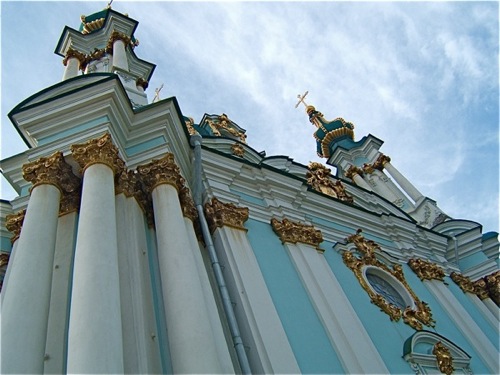 When the Oligarch returned to the guest room where Jesus Josephovich was staying, he was disappointed to find that the model he had sent to entertain the foreigner was crying on the foreigner’s shoulder. It was not what he had hoped for.

The cameras that were set up in the room would have nothing incriminating to blackmail the foreigner with. Now he had to try negotiating once more, but he already knew Jesus Josephovich was a tough negotiator. If money and prostitutes wouldn’t work, then there was only one thing left to try. Family.

The next day the Oligarch took Jesus Josephovich to his dacha outside of the city where his wife and children lived. It was a huge house that looked more like an English manor than a Ukrainian country house. A high gate surrounded the house and the main gate was guarded by a team of security officers. Jesus Josephovich wondered why a man with so much to share would hide it so fervently from others.

Inside the gate several beautiful purebred dogs chased their black Bentley as they pulled the car into a massive garage. They entered the house and Jesus Josephovich was taken aback by the contemporary architecture and modern appliances. He felt like he had entered a space ship or walked into the future. Everything was shiny and the walls glowed with blue and red LED lights from various technological innovations. It didn’t look anything like the traditional Ukrainian dacha that he had visited with Volodomir in the Carpathian mountains.

The Oligarch introduced Jesus Josephovich to his attractive wife and his teenage daughter. His wife tried to appear excited to see the foreigner, but his daughter left the room as quickly as she could while texting on her cell phone. His wife tried to talk about what a wonderful man her husband was, and how much he loved to help people in Ukraine, but it was obvious that she had rehearsed this speech several times before.

They sat down to dinner and had a gourmet four-course meal, with soup, salads, a special lobster dish, and desert. Each course was served with a different wine and aperitifs. It was an exquisite dinner, but strangely enough, none of the food was Ukrainian.

After the dinner, the Oligarch took Jesus Josephovich into his office and sat down. “After a meal like that,” he said, “We must drink.” He held up a bottle of vodka with gold flakes floating inside of it and grinned mischievously at Jesus.

They drank a few toasts of vodka and relaxed in the Oligarch’s over-sized leather chairs. After the dinner and the vodka, the Oligarch was feeling very relaxed. He reclined in his chair and began singing an old Soviet song.

Jesus Josephovich listened to the tune and attempted whistling to it. The Oligarch sat up straight and stared at the foreigner.

“What are you doing?” he asked.

“Why not?” the foreigner wondered.

“Because it’s bad luck. It means that you will lose your money.”

Jesus Josephovich laughed. “A billionaire is afraid of losing money? I thought you said that you wanted to give all your money away when you die.”

“Maybe I will. But I’m not going to give it away now,” he said with a chuckle.

“Why not?” Jesus Josephovich asked.

“It’s useful. I can do important things with it,” he justified. “I can help more people with it if I control it. If I just give it away, who knows what will happen to it?”

“But it will not be to your credit to give away your money when you no longer need it. It is not a sacrifice,” Jesus Josephovich said.

“People always judge the rich harsher than everyone else,” the Oligarch said.

“I’m not trying to judge you,” Jesus Josephovich claimed. “I would tell the same to any man. Giving is not a punishment, it is a blessing.”

The Oligarch nodded in agreement and took another sip of vodka. He leaned back in his chair and took a deep breath. “You know, being rich isn’t easy. People hate you when you’re rich.”

“People hate for many reasons,” Jesus Josephovich stated. “None of them are right.”

“I don’t understand why everyone hates me,” he continued. “I am a businessman, and my business is successful. A successful business makes money, that’s the point. People are simply jealous. They want what I have and they hate me because they don’t have it. I run my business well, but no one gives me any credit for that. They would rather call me a criminal than a successful entrepreneur. It’s easier for them to understand it that way.”

The Oligarch poured them another round of drinks, but he was approaching his limit. His eyes were getting lazy and his speech was beginning to slur, but it was clearly not unusual for him. The foreigner politely refused the additional vodka.

“I think you are correct in one sense,” Jesus Josephovich agreed. “But at the same time, I think it is natural for people to have an aversion to extreme wealth. They instinctively know that something is wrong with having too much money and too much power. Limitations can be a good thing.”

“They’re jealous, and nothing more,” the Oligarch retorted. “They say it’s wrong to be so rich, but if you offered them what I have, they would take it in an instant.”

“Some people might, but some certainly would not,” Jesus Josephovich challenged. “There are people who believe in a greater power than money.”

“Like love, charity, giving. There is a principle of the universe involved in giving and receiving. It is this: You cannot receive if your hands are full.”

The Oligarch thought about this idea and giggled to himself. “How full are my hands?” he wondered. “I’m still getting richer, so they can’t be too full yet.”

“If you truly want to be rich, then you must empty your hands,” Jesus Josephovich said. “There could exist no richer man than the man who gave away everything he ever received. Such a man would never cease to receive an endless number of blessings from all around him, for all the people around him would be rich from his gifts.”

“That’s crazy,” the Oligarch replied. “I’m rich because I have lots of money. Not because I give all my money away,” he argued.

“Imagine this. There was a farmer with a special crop,” Jesus Josephovich began. “Over the years he had developed a type of fruit that grew larger than all of his neighbors’ fruits. Everyone was jealous of him, because his fruit grew larger and healthier than theirs. But the farmer surprised his neighbors and gave them all some of his seeds. Soon everyone in the region was growing his special variety of fruit and the entire region became prosperous. Some people said he was a fool for sharing his secret, but the farmer never complained. He was happy to share his success with his friends and neighbors.

“One day his fields were invaded by a terrible infestation and his crops were ruined. Everything was destroyed, even his seeds. Fortunately, when his neighbors saw what had happened to him, they gathered around him and helped him replant his farm with the seeds from their crops.

“Because he had shared his special seeds with the other farmers, he was able to rebuild his farm even better than before. But if he had kept it for himself, it would have disappeared forever. Because he shared his wealth with his neighbors, it will benefit him and his descendants forever.”

“Interesting story,” the Oligarch conceded. “But what does it have to do with me?”

“I’ll think about it,” the Oligarch said, sobering up slightly. “But now you need to think about something. I’ve shown you my apartment, my sauna, my girls, which you didn’t seem too interested in, and now I’ve shown you my family and my dacha. You want to talk about giving, then let’s talk about giving. I can give you all of this and more, if you will help me. So what do you think? Have I convinced you yet?” the Oligarch asked, one final time.

“Convinced me of what exactly?” Jesus Josephovich asked innocently.

“To work with me. To be my public and political face,” he said. “You will be the public hero, and I will be the director backstage directing the players. Together, we can rule this city and this country.”

Jesus Josephovich scrunched his eyebrows. “I’m not interested in politics. I’m only here to help people. Everything else is unnecessary.”

“Tell me what you want,” the Oligarch pleaded. “You’re the toughest negotiator I’ve ever met. Just name it and it’s yours. Anything. I’ll do anything.”

Jesus Josephovich calmly folded his hands in his lap and looked at the Oligarch the way a father looks at a troublesome young son. “Give all your money away, and I will help you.”

The Oligarch grimaced. “You know I can’t do that.”

“Of course you can. You can do whatever you want to do,” Jesus Josephovich argued. “You weren’t born a billionaire. Your hard work and success helped make you one. You will be successful in whatever you do, but your money is blinding you to true freedom and true happiness.”

The Oligarch stared at Jesus Josephovich, as if he was looking into a mirror. He wanted to look away, but his concentration couldn’t be shattered.

“This money does not make you successful. You made yourself successful. But there is another kind of success. Your success has given you money. The kind of success that I am offering you will give you peace and happiness – so much happiness that you could give happiness to others forever and your own happiness would never run out.”

Jesus Josephovich nodded his head. “The truth always appears foolish to those who don’t have it.”

“You think I don’t have the truth?” the Oligarch questioned.

Jesus smiled. “It’s the only thing you can’t buy.”