Chapter 48 of Jesus Josephovich: The Revolution

Published by RChandlerBrown on September 29, 2013 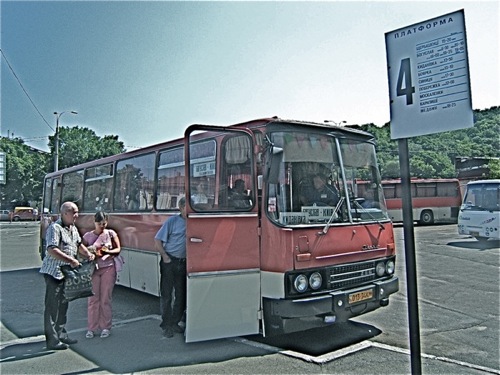 Ch 48. On the Marshrutka

Jesus Josephovich left his new acquaintance, Alex, alone to celebrate his birthday. It was getting late and he needed to get home. Jesus Josephovich walked out of the park and along the road towards the city center.

When he got to the center he asked a young woman how to get back to Volodomir’s apartment. Fortunately Volodomir had written his address on a piece of paper, in case the foreigner ever got lost.

When he showed the piece of paper to the woman she thought about it for a moment. “You should take a marshrutka to get there,” she said. “It’s the fastest way.”

The woman looked at him with bright eyes. “You’ve never been on a marshrutka?”

“It’s a bus that drives like a taxi,” the woman said.

Jesus Josephovich remembered his time in the taxi and became a bit concerned. He hoped that the marshruktas didn’t drive as wildly as the taxi drivers.

“Where can I find a marshrutka?” he asked.

The woman pointed to the end of the street where a long line of people were standing. Near the line were several large vehicles which looked like miniature buses. They had numbers written on pieces of paper in the windows and a sign on the side listing the major stops.

“That’s the one you need,” she said, pointing to the small bus with the longest line.

He walked over to the edge of the street and stood in the line for the marshrutka. After a few moments one of the marshruktas pulled up and people started loading on. They pushed and shoved their way onto the tiny bus as quickly as they could, cutting in front of each other without any consideration for the other people waiting in line.

After the initial group jumped onto the marshrutka and all the seats were taken, a second line of people who didn’t mind standing instead of sitting began to board. Jesus Josephovich realized that he could get on the marshrutka much faster if he didn’t wait for a seat, so he moved over to the smaller line on the side and boarded the small bus.

The marshrutka had about twenty seats inside, but about fifty people got on. The unfortunate passengers without seats had to crush themselves into the small aisle between the seats, which was just wide enough for two people to stand in back to back if they faced the windows on the opposite sides of the bus.

He quickly realized why the woman had said that the marshrutkas were like taxis. They drove just as fast and recklessly as a regular taxi, but you had to try to stay standing in them as they wove their way through the endless traffic. This particular driver seemed to think that he was driving a sports car, because he kept swerving in and out of traffic, cutting off other cars and speeding through intersections at full speed. It took constant focus for Jesus Josephovich to keep himself from falling over.

Jesus was tossed forwards and backwards and from side to side as the marshrutka drove up the hill. Eventually he found a small metal bar to hold onto as the overcrowded transport rocked from side to side, shuddering beneath the weight of its passengers. Unfortunately, when the door opened at the next stop, it slammed against the metal bar that Jesus Josephovich was holding onto and he had to deftly pull his arm away so it wouldn’t be crushed between the door and the metal bar.

At the stop a few people got off the marshrutka and even more people got on. Jesus Josephovich was pushed further into the interior of the bus. He could barely move, people were pressing against him from all sides, and he couldn’t see where he was. The winter air had frosted all the windows over with a thin layer of ice, and the only thing that he could see outside were small traces of light as they drove by busy intersections. He didn’t know where he was, where he was going, or how he was gong to find Volodomir’s apartment if he couldn’t see out of the window.

Suddenly someone tapped Jesus Josephovich on the shoulder. He turned around and smiled at the young man behind him. The young man stared at him and held up some money in front of his face.

“Thank you,” Jesus Josephovich said, slightly confused that someone would simply give him money for no reason.

“Pass it forward,” the young man said as he handed him the money.

Jesus Josephovich suddenly understood that it was to pay for the marshrutka. He was amazed by the trust that the young man exhibited by handing the money to a stranger.

“Thank you for trusting me with your money,” he said to the annoyed young man.

“It’s not my money,” the young man said. “It’s from back there.” He pointed to the back of the marshrutka.

Jesus Josephovich was even more impressed.

“What should I do with this?” he asked.

They young man sighed heavily. “Give it to the driver.”

Jesus Josephovich passed the money on to the driver, and a few moments later, the change was passed back. The smiling foreigner happily transferred the change to the young man and watched as each person passed it further back.

“It’s really wonderful how everyone helps each other,” Jesus Josephovich said enthusiastically.

The young man gloomily stared at him. “We have to. How else can we get the money to the driver? If we don’t give the driver his money, he’ll yell at everyone and stop driving.”

The foreigner smiled. “Well, it’s still wonderful that people can trust each other. It’s like everyone is a part of one big family.”

Someone behind Jesus Josephovich passed some more money by him and the foreigner suddenly realized that he needed to pay for himself. He looked up at the front of the marshrutka and saw a sign that said “1.50 grevens”.

He tried to reach into his coat pocket, but he could barely move his arms. The marshrutka was shaking from side to side so quickly that when he let go of the handrail above his head, he fell onto the person beside him. He quickly apologized and everyone around him stared at him like he was crazy. Eventually he got the money out of his pocket and handed it to the person in front of him.

“Would you please give this to the driver?” he asked.

A woman in front of him grabbed the money without looking at him and passed it forward. A minute later she handed him his change. He was delighted to see that it worked even for foreigners.

Jesus Josephovich turned back to the young man behind him. “You must feel very happy to live in a place where you can trust your neighbor with your money.”

The young man laughed. “It’s not always safe to pass your money down,” he said. “I once saw a man pass a 50 down and when it reached the front of the marshrutka, a man near the front told the driver to stop, opened the door, and ran away with the money.”

Jesus Josephovich looked around and saw that most people were sitting or standing still looking around at nothing in particular. They were not talking to each other. In fact, everyone tried as hard as possible not to notice or be noticed by the people around them.

“Why don’t people talk to each other when they are so close to one another?” Jesus Josephovich asked.

The young man looked at the foreigner with a slightly perturbed look. “I don’t know,” he said. “People don’t like to talk to strangers.”

“It’s very strange,” Jesus Josephovich said, “that people trust each other enough to hand their money to strangers, but they don’t feel comfortable enough to talk to each other. These buses would be much more pleasant if people made new friends while they were traveling.”

“Ahh, yes,” Jesus Josephovich said sarcastically. “They need time for the important things, like work and money.” He shook his head sadly. “All they have to do is open their mouths and they can connect with other people anywhere at any time. You live inches from one another, but you are miles apart. If you only knew that sitting next to you was a treasure worth more than all the money you will make in your entire lifetime.”

The young man stared at Jesus Josephovich fixedly. “What treasure?” he asked.

“There are fifty different people in this bus, and there are fifty different treasures,” he answered, looking at the people around him. “One is a brilliant artist, another is a born leader, another a true friend, another a clever businessman, another a relentlessly hard worker. One is wonderful with children, another cooks as well as a French chef, another tells the best stories you’ve ever heard, another the funniest jokes, and another is so kind and wise and loving that she is considered a mother to all her know her.”

The young man glanced around at the blank faces of the passengers who were riding in unnatural silence all around him.

“There are so many jewels all around us it doesn’t matter which you pick. Each and every one will make your life richer,” Jesus Josephovich said.

Then he looked in the young man’s eyes.

“And there is a young man here who is so smart, so clever and wise, who has read so much psychology and philosophy that he can help anyone with any problem,” Jesus Josephovich said, holding his glance. “In any situation he can help people understand the most logical and practical answer, without worrying about distracting, irrational emotions.”

The young man swallowed nervously as he heard his personality described in detail by the strange foreigner.

“Hopefully that young man will learn to initiate relationships with new people, to talk to people and meet people wherever he goes,” Jesus stated. “Only then will he be able to truly use the gift that God has given him.”

The young man was frozen with fear and doubt, but he couldn’t take his eyes off of Jesus Josephovich. Suddenly the marshrutka stopped hard and the young man fell onto the person next to him. It was a young woman with a sad face and something deep inside told him that he should talk to her.

People moved on and off the marshrutka, pushing and shoving as usual, and when the young man looked back to talk to the foreigner, Jesus Josephovich was gone.

Out on the street, Jesus Josephovich smiled as he watched the young man and woman talking to each other on the marshrutka. As the oversized taxi drove away he felt a feeling of true peace and joy flow over his soul. Then he felt another interesting feeling in his chest as he looked around the street where he had exited. He had no idea where he was.