Chapter 47 of Jesus Josephovich: The Revolution

Published by RChandlerBrown on September 27, 2013 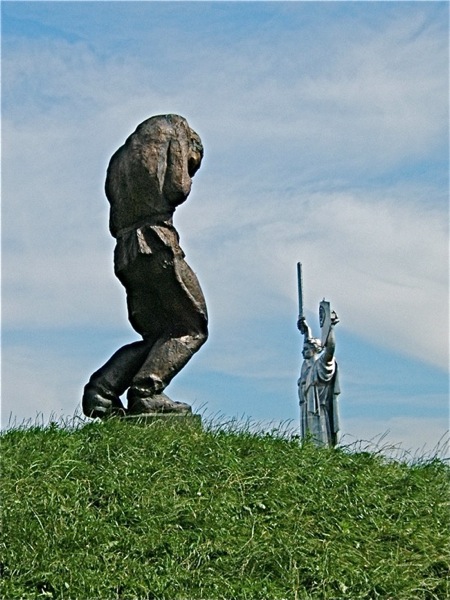 After his engaging lunch, Jesus Josephovich escaped from the crowds in the center of the city and took a walk through Mariinski Park. The park was full of young people meandering around in groups and love-struck couples walking hand in hand oblivious to the world around them.

The trees were covered in white streaks of snow and the frozen river far below looked like peaceful plain, only disturbed by the occasional fisherman dotting its icy facade. Jesus Josephovich walked past the presidential palace and the old fountains, which weren’t working because it was winter, and cleared his mind of the distractions of the day.

Eventually he came to the Lover’s Bridge, a small, rickety old wooden bridge that hangs precariously over a small road passing through the central hub of the city. The bridge was covered in ribbons, padlocks, and poetic graffiti, all expressing the timeless energy of youthful love.

Jesus Josephovich walked over to him and breathed in the winter air. “Is this bridge safe?” he joked, looking down through the holes in the wooden planks that composed the platform.

The young man slowly lifted his head and looked at Jesus Josephovich. He was irritated that someone had interrupted him, but when he saw the foreigner’s innocent, peaceful face, he felt suddenly calm.

“Not if you’re in love. Do you know why they call this Lover’s Bridge?” the young man asked. “They say that a man proposed to his wife here, and he told her that if she didn’t say yes, he would jump.”

Jesus Josephovich looked down at the dark road twenty meters below them and he hoped that the man’s girlfriend has said yes. “Interesting strategy. Did it work?”

The man shrugged his shoulders and glanced at the street below.

“Why are you here?” Jesus Josephovich asked.

“Do you see that?” the young man said, pointing to the words “Alex loves Sveta” written in large white letters on the metal support beneath the bridge. “I wrote that for the woman I love.”

“You climbed down there?” Jesus Josephovich asked in shock.

“People do crazy things for love.”

“Love is the great motivator.”

Alex laughed morbidly. “And the great destroyer of lives.”

Jesus Josephovich looked at him concernedly, and the young man turned his head away and stared down at the road below.

“A few months ago I told God that if he doesn’t give me a purpose for my life, I’m going to kill myself on my next birthday. I think this will be a good place to do it. What do you think?”

Jesus stared at the young man and tried to read in his face what was wrong. Alex’s face was hard as steel railing. “Why do you want to kill yourself?”

“I don’t see a point in living any more,” Alex replied nonchalantly.

“I was in love,” he began. “I didn’t expect it to happen so fast, but we became great friends and then one day I realized that I couldn’t live without her. I loved her more than anything else in the world and all I wanted in life was to be with her, to take care of her, to love her forever.”

“I used to do a lot of bad things, but the day I met her, I stopped doing drugs and I stopped drinking and smoking. I don’t know why. I just didn’t need those things any more. I didn’t even realize that she was the reason I had stopped until I knew that I loved her.

“I had always known that I wouldn’t do drugs forever,” Alex continued. “I did them because I didn’t have anything better to do. I drank and smoked for the same reasons. They were just habits that I did because I could. They made me feel happy for a short time. That was all.

“But when I met her, my desire for those things disappeared. It was like I had found what I was looking for and it filled me. I found what I truly needed to be happy, and everything else was unnecessary. I was ready to change my whole life for her. I had already changed my life for her, but she didn’t know it. She had no idea that she had freed me from those things.

“I had so many dreams for us,” Alex confessed. “I wanted to rescue her, like she had rescued me. I wanted to take her away from her boring job and her angry parents and her daily problems, and I wanted to build a paradise just for the two of us.

“I wanted to make her my new life. I felt like I finally knew what my life was all about, what the point of my life was and why things had happened the way they did. She was my purpose, and I was happier than I had ever been in my entire life.

“Then she disappeared. She stopped calling me. I tried to talk to her, but when she talked to me, it was like talking to a different person. The girl I knew, the girl who loved me, was gone.

“I don’t know how it happened, but her whole attitude just changed. I could see that she didn’t want to be with me. She didn’t want to talk to me any more, and I could even see anger in her face and in her actions. It was as if she hated me for loving her, like my love for her was causing her pain. To me, my love for her was my whole joy and my freedom. But to her, my love was an annoyance.

“I was crushed. My heart wasn’t just broken – it was pierced. It felt like a knife was slowly twisting and turning inside my chest all the time, and all of my happiness, my hopes and dreams, all of my energy simply bled out.

“Of course I started using drugs again, and drinking and smoking. This time I went even deeper though. I was hoping it would kill me, but it didn’t.

“I couldn’t sleep, I couldn’t work. I lost my job, I got kicked out of my apartment. I tried to kill the pain with drugs, but the drugs only made the pain worse.

Every time I got high I remembered she was the reason. It was all because of her. If she had just loved me, none of this would have happened. Why didn’t she love me? I don’t understand why this happened to me. You can’t imagine what it felt like to lose her. It was like dying.”

Jesus Josephovich stood still for a moment listening to the wind and watching the cars drive by under the bridge. He put his hand on the Alex’s shoulder and looked into his tear-stained eyes.

“I know exactly what it feels like to love someone, to be willing to die for someone, and to have them turn their back on you. I have felt it many times.”

Alex stared into Jesus Josephovich’s eyes and he knew that he was telling the truth. There was something strange about this foreigner, as if they had known each other for a long time. Somehow he felt that the foreigner’s words were referring to him.

Jesus Josephovich shook his head and smiled. “Death is no more permanent than life. Both are merely changes in the state of things. They are doorways to new beginnings.”

“I don’t believe in life after death,” the young man said, looking back at the road that disappeared around a corner into the darkness. “I think that after we die, there is simply nothing. I would rather be nothing than live in this pain.”

“Many people believe that,” Jesus Josephovich admitted, “because they do not believe that life has a fundamental purpose. But look around you. Look at the world you live in, the universe you occupy.

“Life and death are endless cycles, ever present, ever changing,” Jesus continued. “A tree drinks from the soil, it take those nutrients and bears fruit. The fruit falls to the ground and dies or gets eaten by an animal, and the seeds in the fruit fall into the soil. The seeds become a tree, the tree grows and bears fruit, and the cycle begins again. When the tree dies, the nutrients return to the soil and become a part of a new tree.

“Entire planets and stars form and die and then reform into new stars and new planets. Every death is the beginning of a new life. Nothing dies forever,” Jesus said. “It is the nature of our universe.”

“So what will happen if I die?” Alex asked.

“Then after you die, your life will become a part of something else,” Jesus Josephovich stated. “Your problems will not disappear. A sick creature pollutes all of those around it and even the stream from which it drinks. You do not want your soul to be like that. Solve your problems now, or you will carry them with you forever. Death will not solve them for you.”

Alex swallowed guiltily, feeling the weight of the foreigner’s words. Indeed, his pain felt so heavy, so deep, that he could not imagine it lightening even with death.

“You have already found the solution,” Jesus Josephovich said. “Love. Don’t stop loving. Your love for her is only the beginning. Even if she doesn’t love you, you must continue to love her. Let your love grow until you can love everyone around you. Then you must learn to love the people in your city, and then your countrymen, and then the whole world. Then you will find your true purpose. Then you will be able to love yourself.”

“I believe you,” Alex admitted. “But our love was a special love. I don’t think I can find that kind of love again.”

“Of course it was special. It was your first love,” Jesus said. “But don’t let it be your last.”

The young man paused and stared at his bottle. He walked to the end of the bridge and threw the beer bottle against the wall. It smashed into a hundred pieces and splashed beer across the ground in a wide circle.

“What was that for?” Jesus Josephovich asked him.

“For freedom, he said. “Thank you. This is the best birthday present I have ever received.”

“What do you mean?” Jesus Josephovich wondered.