Chapter 46 of Jesus Josephovich: The Revolution

Published by RChandlerBrown on September 27, 2013 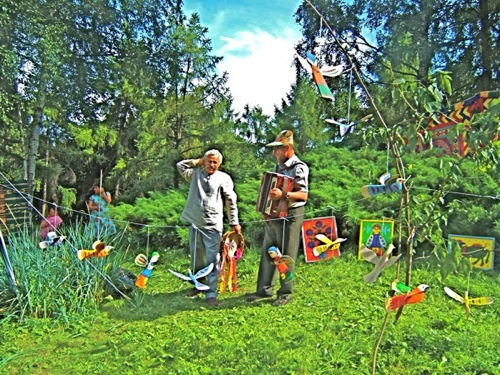 The crowds at the political rally were getting larger and larger around Jesus Josephovich, and he was getting very hungry, so he decided to escape for a while to get something to eat. While Talia handled more questions about Jesus’ candidacy, his friend Andrey Bogdanovich helped him get away from the crowd through a side street that led them down the hill towards the central square.

Down the side street they found a traditional Ukrainian style restaurant which looked promising. They slipped inside before the crowds could see where they went. Jesus Josephovich took a deep breath and relaxed.

“Thanks for the help once again,” he said to his friend.

Andrey laughed. “No problem. It looks like you’re a celebrity now.”

Jesus Josephovich shook his head wearily. “It’s a terrible thing to be a celebrity. It’s easier to help people when they have no idea who you are.”

“Don’t worry,” Andrey said looking around the small restaurant. “I don’t think the waitresses in this place know their current events very well. I doubt they’ll recognize you.”

Jesus Josephovich glanced at the waitress standing at the counter. She was dressed in a old-fashioned white and red outfit, which she clearly didn’t feel comfortable in, and she was chatting to another waitress who was standing on the other side of the counter as if she had nothing to do. They hadn’t even noticed that Andrey and the foreigner had entered the restaurant.

The restaurant was small, just a single square room with a few long tables surrounded by too many chairs for their size and a few stools rested against a thin table along the side wall. A few people were inside, a couple of locals drinking beer and a couple of tourists eating enough food for twenty people and talking inappropriately loud.

They walked to the front of the restaurant, turning sideways to avoid the tightly packed chairs and the legs of the other guests, who didn’t seem to care that they had blocked the small path from the door to the cashier.

They stopped at the counter to order some food, and waited while the two waitresses finished their conversation about a guy that one of them had met the night before. The waitresses gave them an annoyed glance, as if they had interrupted something important. When the conversation finished she turned around without looking at the new customers and walked out of the room through a small door that led to the kitchen. The other waitress lethargically followed her.

Jesus Josephovich looked at Andrey. “Did we do something wrong?” he wondered.

Andrey laughed. “No. It’s just typical Soviet style service. Most restaurants have improved in recent years, but there are still a lot of places where they treat you like they did in Soviet times – like they don’t care.”

“If the service is so bad, why do people eat here?” Jesus Josephovich asked.

“I don’t know,” Andrey said. “I guess we don’t really notice it any more.”

Finally the cashier came back into the room casually as if she didn’t know that anyone was waiting for her. She reorganized a few things behind the counter and then made eye contact with Andrey.

“I’m listening,” she said apathetically, as if she were doing him a favour.

Andrey ordered some soup, salad, and a bowl of Ukrainian vereniki, a special kind of stuffed noodles like ravioli filled with potatoes. Then he handed the menu to his foreign friend.

“What do you want?” Andrey asked.

“It doesn’t matter to me,” Jesus Josephovich said. “Order me something that I can only get in Ukraine.”

“And give me vereniki with cherries for dessert,” Andrey said to the cashier.

“We’re out of cherries,” she said.

“What do you have?” he asked, looking back at the menu.

There were about ten different kinds of vereniki and she pointed to two of them. “We have potatoes and vegetables.”

“And everything else on the menu?” Jesus Josephovich asked.

“We’re out,” she repeated irritably, as if it were his fault.

“Don’t worry,” Andrey said. “This will be good.” He turned back to the waitress. “And two black teas, please.”

They paid for their order and sat down at an empty table. The waitress disappeared into the door that led to the mysterious kitchen and storage room. Perhaps she was not only the cashier and waitress, but also the cook. Jesus Josephovich noticed that they simply left the restaurant without supervision.

“Isn’t it dangerous to leave the restaurant unattended?” Jesus Josephovich wondered. “Someone could come in and steal the money or food.”

Andrey shrugged his shoulders as he sipped his tea. “Ukrainians like privacy,” he said. “They’re not worried about criminals. Ukrainians don’t usually steal little things. We wait and steal something big.”

“Like a business or millions of dollars from investors. A lot of companies have been doing those kinds of things,” Andrey explained. “Corruption is a plague here. I think that’s why people want you to be mayor. They believe that you might fix the corruption. So do I.”

Jesus Josephovich scratched his curly beard. “I hope that the people will realize that no man can change things for them. They have to make the changes themselves. They have to get rid of the corruption in their hearts and fill their hearts with brotherly love before anything else will change. The only thing I can do is motivate them to believe. To show them that it is possible.”

“Well, if anyone can do it, you can,” Andrey said.

“You can do it too,” Jesus Josephovich replied.

Andrey was surprised. “Me? Really?”

“Of course. All you need is faith. When you have faith, all the doors of possibility are open to you. Even a little faith can make miracles happen.”

“Maybe I need more faith that they will bring our food soon,” Andrey joked, looking at the kitchen door. They had been waiting more than ten minutes, but there was still no sign of their food.

Finally the other waitress came out of the back and handed someone at the table of loud tourists a bowl of ravioli. As she walked by, Andrey asked her to bring their food. She shouted something in reply and walked back into the kitchen.

A few minutes later she brought their soups and salads. She laid them on the table in front of them quickly and tried to walk away before they could ask her any more questions. Andrey stopped her, however, and asked for some sour cream, which she brought out reluctantly.

Twenty minutes later they found themselves still waiting for the main course. They had finished their soups and salads long ago, but they had not seen a waitress in all that time.

Eventually the two women returned to the main room of the restaurant. As they entered they flicked cigarettes into a trash can.

“They were smoking out back,” Andrey said in disbelief. He yelled at the waitress. “Where have you been?”

The waitress scowled at the obnoxious customer. “It’s our lunch break,” she claimed.

“We haven’t gotten our orders yet,” Andrey said.

The waitress came over and looked at their receipt. She sighed and walked to the kitchen. A minute later she returned.

“She forgot to tell the cook about your order,” she said, blaming the other waitress. “It will be ready in twenty minutes.”

“What is your name?” Jesus asked kindly.

“Are you upset, Marina? You haven’t smiled all day.”

Marina blushed and looked around the restaurant nervously. “I’m not upset. I’m just tired today. It’s been a long day.”

“I understand. It’s been a long day for me too.” He smiled at her and she grinned back. “How can I make you happy?” he asked.

She smiled shyly. “You can’t,” she said.

“But I already did. You just smiled.”

She smiled again. She realized that she did feel slightly happier. “Okay, so what’s your point?” she asked.

“My point is that sometimes it’s enough simply to let people know that you want to make them happy, and that thought alone makes them happier. You don’t even have to do anything. Your desire is enough.”

The waitress nodded as she considered this idea.

“As much as I can, I try to imagine that other people have similar thoughts and desires to me, and I act accordingly,” Jesus Josephovich explained. “It makes people quite happy, and I find when I do nice things for other people, they begin doing nice things for me.”

“That sounds like a lot of work,” the waitress noted.

“Oh it is, at first,” Jesus Josephovich admitted. But once you get the hang of it, it actually makes life much simpler. Even when things aren’t perfect, people will still be happy because they know that you are doing your best. Things just go smoother and easier. And when you make other people happy, it makes you happier too.”

The waitress walked off thinking about what he had said. She returned with their food and served them with a polite, happy expression on her face.

“Enjoy your meal,” she said with a smile.

“We will,” Jesus Josephovich said. “Oh, and I would like to order this cake for desert,” he said pointing to the menu.

“We’re out,” she embarrassedly.

Andrey laughed. He was amazed that the restaurant was out of so many things, but this time, because of the waitress’ bright smile and friendly attitude, he realized that it didn’t matter. They could enjoy it either way.