Chapter 44 of Jesus Josephovich: The Revolution

Published by RChandlerBrown on September 26, 2013 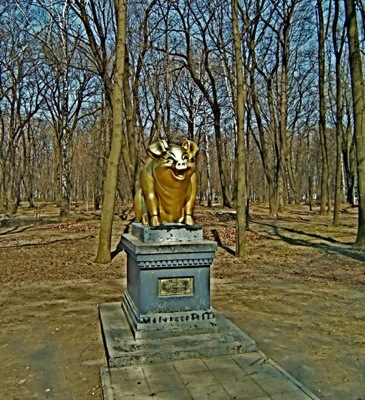 While Jesus Josephovich was speaking at the rally in front of St. Michael’s Cathedral, hundreds of people continued to gather in front of the stage to listen to the famous healer turned mayoral candidate. Someone in the crowd overheard Talia’s request for Jesus Josephovich to heal someone and they started shouting, “Heal us, heal us!”

Elderly men and women reached out their hands to be touched by the healer and others shouted out requests for him to heal their friends and family members, but Jesus Josephovich made no move towards the audience.

“I’m not going to heal anyone,” he said sternly.

Talia grabbed the microphone. “At this point in the rally he’s not doing any healings,” she emphasized, trying to keep the crowd in anticipation. “But he could heal someone at any moment later on.”

She handed the microphone back to Jesus Josephovich with a frustrated look on her face.

“Never say ‘no’,” she admonished him. “Always say something neutral, like ‘not at this time’, or ‘you’ll have to wait a little longer’. You have to keep them interested. Make them believe that something miraculous could happen at any moment.”

“You’re not a real healer,” someone shouted from the crowd. “You’re a fake!”

A few people began to boo and heckle him for not showing them something miraculous.

“You’re right,” Jesus Josephovich said. “I am not a healer. I do not heal people. You heal yourselves through the faith and power that God has put inside of you. Give the credit to God, not to me.”

A well-known atheist pushed to the front of the crowd and grabbed the microphone. He was a wild looking man with long wiry hair and deep shadows under his eyes. His thick scarf and winter coat made his thin frame appear almost comical, like a child wearing his parent’s clothing. His pale, gray-yellowish skin made him look as if he had rarely been outside in the sun and he probably never got to sleep before 2 or 3 am. As unorthodox as he appeared, however, he held himself with a certain pride that made people listen to him, even though they usually weren’t interested in what he had to say.

He cleared his throat in the microphone and spoke in a cynical, sarcastic voice. “You are always talking about God,” the arrogant atheist said. “Are you going to turn the government into a religious hierarchy? There is only one thing more corrupt than government officials, and that is priests.”

A few people in the crowd laughed, but most gasped in shock at his audacity. Jesus Josephovich simply smiled.

“I’m not a fan of hierarchies. God is one.” Jesus Josephovich said. “I believe that we should think of our elders as fathers and mothers, everyone else as brothers and sisters, and God as the father of us all, and we should treat everyone as such. That is the only hierarchy I believe in.”

“I’m not campaigning,” Jesus Josephovich said sincerely. “I am simply here to talk about our lives. How can we talk about life without talking about the creator of life?”

The atheist shook his head angrily and changed the subject. Clearly this foreigner did not understand the depth of the man’s questions.

“Religion is for weak people,” the atheist screamed. “It supports a slave mentality. It is a way to control the masses in order to prevent them from revolting against their corrupt leaders. Don’t you see that you are making the people of Kiev weaker by talking to them about God instead of politics?”

“I told them that God has given them free will,” Jesus Josephovich argued. “Free will gives them full responsibility over their lives. God is not going to change Ukraine for us. The people need to change it themselves, and it is possible. They simply need the will and faith to do it.”

The atheist threw his hands in the air dramatically. “Your philosophy prevents people from achieving a better life,” he claimed. “You tell people to be happy with nothing. You’re trying to brainwash them into believing that their lives are wonderful, when in reality they are in poverty and pain.”

Jesus Josephovich nodded his head sympathetically. “Poverty and pain are unfortunate things, but neither of them creates nor destroys happiness,” he said. “Some of the happiest people I have ever known were extremely poor, and some of the wisest and most contented men I have ever met had experienced incredible amounts of pain and suffering in their lives.”

The atheist gazed out at the crowd and realized that he was losing this debate. He couldn’t think of anything to say to counter that statement.

Jesus Josephovich continued. “In fact, some would say that these difficult times were what enabled them to experience so much happiness and contentment later in life. Happiness is not based on external situations and material possessions – happiness comes from within, from your response to every situation.”

The atheist frowned in frustration and tried to think of a different point to argue, something that he thought Jesus Josephovich could not argue against.

Jesus continued. “Certainly you can live without ever acknowledging God, but what then is the purpose of your life?”

The crowd stared at the atheist. He was clearly unprepared to give an answer to such a question.

“Just living?” Jesus repeated. “Tell me this: If a tree grew without any leaves or branches, would you say that tree was living?”

“Technically it could still be alive,” the atheist said.

“But is it living in the way it was designed to live?”

“Not really,” the atheist admitted. “Depends on the tree.”

“And what would you do with such a tree? Would you let it grow in your yard, continuing to steal nutrients from the other healthy plants, or would you cut it down?”

“Would you say that this tree had a successful life?” Jesus Josephovich asked.

“No,” the atheist answered honestly. He looked down at his feet nervously as the debate was moving in Jesus Josephovich’s favor.

“So then, you must take account of your life in the same way,” Jesus Josephovich said. “Ask yourself: What is growing in my life? What is improving? Where is my fruit?”

“But what is the fruit of a man?” the atheist wondered. “I’m not a tree. I can’t grow oranges and bananas,” he quipped.

“It is like the fruit of a tree,” Jesus Josephovich explained. “It is that which is good, that which feeds others, and that which reproduces the goodness in ourselves. Do you have this fruit in your life?” Jesus Josephovich asked. “Is your life filled with so many good things that you are content and you are able to help others be content?”

“Not always,” the atheist said.

“Then perhaps it would be wise to find a purpose for your life. A tree without limbs or leaves is a foolish looking thing indeed. A man without a purpose looks no less foolish.”

The crowd laughed and the atheist became angry. He thought of one more argument, one more logical problem that he was sure Jesus Josephovich couldn’t answer.

“I don’t believe that your purpose will make my life better,” he asserted. “You say that god created everything, and you say that god loves us. But if there is a god and he loves us, then why do bad things happen? Why are our lives so difficult?” He arched his arms over the crowd dramatically, glancing at the stoic faces of people who had lived through terrible times.

Jesus Josephovich nodded his head gently, understanding the emotions behind the question. “Even a perfect man does not have a perfect life,” he said. “His life is still filled with troubles and difficult times, because of the selfish decisions of others.”

“Then why should I try to live a good life, if I’m still going to have problems like everyone else?” the atheist asked.

“To be content,” Jesus Josephovich stated. “Yes, everyone will have problems, but there is a difference. The difference is that the perfect man deals with the difficult situations perfectly. He is content in all circumstances, no matter what.”

The atheist nodded his head in ascent. “That is a difficult thing to achieve,” he said. “I would like to believe in these things, but it is difficult.”

“Not in front of all of these people,” the atheist said fearfully.

“One of the fruits of a man is honesty,” Jesus Josephovich replied.

The atheist swallowed nervously. “I’m not that kind of tree.”