Chapter 43 of Jesus Josephovich: The Revolution

Published by RChandlerBrown on September 26, 2013 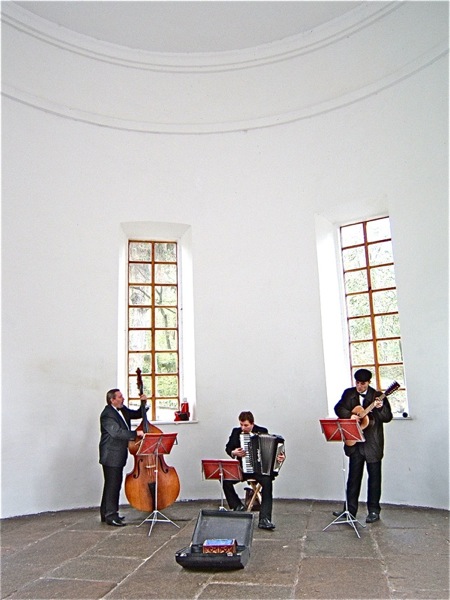 The reporters at the press conference continued to ask Jesus Josephovich questions for what seemed like hours. But when they started asking personal questions, such as where he was from, Talia cut the interview short. “I’m sorry, but we have to go,” she said. “We have a lot more campaigning to do.”

The reporters and cameramen followed Jesus Josephovich and Talia out onto the street where they jumped into a sleek black car and drove away.

“That was nice,” Jesus Josephovich said. “Those are good people.”

“Well, I’m glad you enjoyed it, because we’re not finished yet,” said Talia.

“No,” she replied. “That was just for television. Now we’re going to do some real campaigning.”

“Those people weren’t real?” Jesus Josephovich asked, trying to understand her point of view. He found it strange to think that Talia did not consider the reporters real people. Maybe if he had hugged one of them, then Talia would have seen that they were as real as the grandmothers selling vegetables on the street.

“But I do care about the common people. That’s why I’m here.”

“I know that,” Talia said. “But they don’t know that,” she said, motioning towards the people on the street. “We need to get a few good phrases and quotes that we can put on television and on the Internet so that everyone can see that you are the candidate who cares the most.”

Jesus Josephovich was not inclined to believe that people, especially politicians, who acted nice on television always actually acted that way in real life. But he didn’t share his opinion with Talia. She was the professional PR Agent, not him.

The car dropped them off in front of St. Michael’s Cathedral. There was a large crowd gathered there and a few young activists were selling t-shirts and handing out small flags with Jesus Josephovich’s face on them. He saw the strange political icons and looked at Talia with a questioning face.

“Don’t worry,” she said, misinterpreting his look. “You’ll get a percentage of the t-shirt sales.”

They walked through the crowd to a small stage in front of the high blue walls surrounding the cathedral. People in the crowd shouted exuberantly at Jesus Josephovich as he walked by and shook their hands. Some people asked for help or to be healed, while others hurled political questions at him about pensions and healthcare.

A strong arm grabbed him as he walked past and he saw his friend Andrey Bogdanovich, the man who had taken him on a tour of St. Michael’s Cathedral.

“Andrey! Hello. How are you? What are you doing here?” Jesus Josephovich asked.

“I see that you‘ve been busy,” Andrey joked, looking around at the crowd. “I came to support your campaign. I’m going to be one of your biggest supporters.”

“Why?” Jesus Josephovich asked, unsure as to why everyone wanted him to get involved in politics.

Andrey laughed. “Because, you’re the most honest man I’ve ever met.”

Jesus Josephovich smiled. “Come up on stage with me. I could use a friend.”

Jesus Josephovich took Andrey with him onto the stage and stood in front of the crowd. A small camera crew was set up on the stage.

“These people are going to record you,” Talia explained. “So try to say something unique and interesting that we can use as a catch phrase for your campaign. Maybe say something about healing Kiev, or something like that. Okay?”

Talia took the microphone and introduced Jesus Josephovich to the crowd. The crowd cheered for him and garishly loud music blared out of several large speakers. He considered that Talia’s strategy was to make the listeners deaf so that anything he said would sound brilliant.

The crowd was a mix of various kinds of people. The news report from the day before had inspired many people to come, so there were dozens of women whose husbands had cheated on them, and even a few men whose wives had been unfaithful. There were people who had lost jobs, or lost family members, and a large group of people who had simply lost hope. They were all hoping that Jesus Josephovich would give them the answers to their problems.

Talia finished the introduction and handed the microphone to Jesus Josephovich. They also handed a microphone to the people in the crowd so that they could ask questions. The foreigner stood at the front of the stage and started to speak.

“People of Kiev, thank you for your support. But you know, as I have said before, politics is not the solution to your problems. Politics solves political problems, but most of the problems in our lives are not political. They are real, and they are spiritual. Only God and each other can help us with such problems. To change our country, we must change ourselves.”

Talia quickly grabbed the microphone away from Jesus Josephovich.

“And when he becomes Mayor, Jesus Josephovich is going to show us how to solve all of our toughest problems,” she declared. “Please come up to the microphone if you have a question for the Great Healer.”

Jesus Josephovich frowned when Talia called him “the Great Healer”. He wasn’t very fond of that nickname. He preferred to be called Teacher. Healer put too much emphasis on his own actions. Teacher was more appropriate – it put the responsibility on the people to learn and to put the truth into practice.

An elderly women walked up to the microphone and shouted emotionally. “You say that God is with us, but we revolted against corruption and nothing changed. Why is God punishing us?”

Jesus Josephovich smiled tenderly at the elderly woman, knelt down at the front of the stage, and held her hand. “My dear woman, why do people think that God is always punishing them? God doesn’t enjoy punishing people,” Jesus Josephovich explained. “In fact, he very rarely punishes anyone. We create most of our problems ourselves. Then we blame God for them. It’s an unfortunate situation. God is always waiting to help us improve our lives, but most of us don’t listen to him, because we think that he is somehow the cause of all of our troubles.”

“But look at what is happening in our country,” the woman yelled. “How can we change it?”

“God gave you free will,” Jesus Josephovich said. “You can do whatever you want to do. If you want to change something in your life or in your country, then you can change it. You have as much power as anyone else. However, free will also means that everyone else can do whatever they want to do, and unfortunately, many people abuse that privilege and make life more difficult for the rest of us.”

“But if God loves us, why would God allow these things to happen? Why doesn’t he fix the situation?” the woman asked.

“If you pick up an apple and eat it, did God force you to do it? Did God do it to you, or did you give it to yourself?” Jesus Josephovich questioned. “God gave you free will. You have all the power. He gave you all the power over your life. He gave you complete freedom to do whatever you want. Now you don’t want it?”

An elderly man stepped up to the microphone. “It’s not fair,” the man said. “A few people get rich, and the rest of us are left with nothing. What are you going to do to change this situation?”

“We are the cause of our own problems,” Jesus Josephovich said. “We create problems for ourselves and for each other. Therefore, we are also the solution to each other’s problems. If you want to change your country, you must change the way you live. Remember this the next time you make a decision. Your decisions affect everyone around you. We all have a choice – we can make life better and easier for each other, or we can make life harder and less pleasurable for each other. The choice is yours.”

A middle-aged man with glasses and a bald head took the microphone. “If it’s our fault, then maybe God is punishing us. Maybe he is punishing Ukraine for the sins of the past.”

Jesus Josephovich shook his head. “Remember, God doesn’t want to punish you,” he explained. “He wants to show you, to teach you how to live better. He wants you to learn from your mistakes. God is not a police officer. He is a father.”

An elderly man grabbed the microphone. “Are you going to increase our pensions?” he asked passionately. The crowd cheered. It was the question they were all waiting to hear.

Talia suddenly grabbed the microphone and laughed nervously. “Thank you for your questions,” she said politely. “Now we will move on to the next part of the rally.”

She put her hand over the microphone, leaned over to Jesus Josephovich and whispered in his ear. “Don’t talk about pensions,” she said. “Try to change the topic. Can you heal someone now?” she asked hopefully. “It will give us great ratings.”

Jesus Josephovich smiled. “I already did.”

Talia looked around excitedly for a walking miracle. “Who?”

“Everyone who hears my words and who puts them into practice.”

Talia frowned and put her hands on her hips angrily. “Are you punishing me for something? Are you trying to make this difficult for me on purpose?”

“No,” Jesus Josephovich answered. “I’m just trying to teach you.”