Chapter 41 of Jesus Josephovich: The Revolution

Published by RChandlerBrown on September 24, 2013 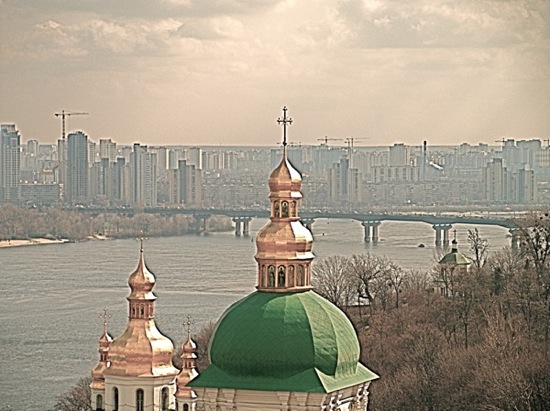 After a wonderful and relaxing vacation in the Carpathian Mountains, Volodomir’s family returned to the smog, traffic, and stress of Kiev. They had been in the mountains so long that they forgot how busy the city was, and they missed the peaceful tranquility of nature. Within a few minutes, however, the bustling energy of the city wiped away their thoughts of the mountains and they were once again fully consumed by the life that they had so recently escaped.

Katya was on her phone chatting with a dozen different friends, Leosha was playing a hand-held video game, Volodomir was scheduling business appointments, and Elena was reading a magazine about how to decorate your apartment to give it a more natural country feel.

Jesus Josephovich, however, had not changed. His spirit was still calm like the icy river gently flowing through the ancient Carpathian hills. His face was permanently fixed in a contented smile, and everyone who saw him in the train station and on the street stared at his strange, blissful expression thinking, as Ukrainians do when they see anyone overly exuberant in public, that he was probably on drugs.

This blissful expression soon changed to one of surprise as Leosha glanced out the window and shouted at everyone in the taxi.

“Look!” he yelled. “Look at that t-shirt. That’s a picture of Jesus Josephovich.”

The family looked out the window at an elderly woman with a bright red t-shirt. There was writing on the front, but they drove past her too fast to read what it said. On the back there were large white letters that read: “Heal Kiev.” Beneath the letters was an artistic drawing of Jesus Josephovich’s face. Everyone was stunned.

“Why are you on a t-shirt?” Leosha asked.

When they got home they unpacked their bags and prepared to relax. Just as they were about to sit down and make some food, the doorbell rang.

Elena answered it and Talia, the PR agent who appointed herself as Jesus Josephovich’s manager, walked through the door with a news reporter and a cameraman.

“Hello Talia. How did you know that we came back?” Jesus Josephovich wondered.

“It’s my job to know everything. I’m your PR agent,” Talia said.

“You’re not my agent. I didn’t agree to anything.”

“But we shook hands,” she argued.

“I was saying thank you for your time,” Jesus Josephovich explained.

“Oh well, we can talk about that later. Right now we have more important things to discuss. Did you see your new t-shirt?” Talia held up a yellow version of the “Heal Kiev” shirt that they had seen on the street. Then she flipped it over so they could see what was on the other side. Everyone was shocked when they read the bold white letters emblazoned on the front:

“What does this mean?” Jesus Josephovich asked.

“Oh it was just a joke,” Talia said nonchalantly. “A publicity stunt to get you more attention in the media. You went on vacation in the middle of your rise to fame, so I had to think of something to keep your momentum going.”

“There are almost a hundred different people running for Mayor, so we thought we’d make a joke about the famous healer running for Mayor too,” the PR agent explained. “But then something happened that we didn’t expect.”

“You grew a conscience?” Leosha shouted from the kitchen.

Talia ignored his comment and continued on in her rapid speech. “The shirts sold incredibly well, everyone started buying them, and people started campaigning for you to be mayor.”

“People are campaigning for me?” Jesus asked, not sure what that meant.

“Yes. They thought it was real, and they want you to be Mayor,” Talia explained.

“How many people?” Jesus Josephovich asked.

“Everyone,” she said. “You have more support than all the other candidates.”

The family was stunned silent. The news reporter and cameraman finished setting up their equipment and they shoved a microphone in front of Jesus Josephovich’s face.

“We’d just like to ask you a few questions about your candidacy,” the reporter, an attractive young woman in a thin purple dress, said in her most professional voice.

The red light on the camera turned on and the cameraman lifted his hand to show that he was filming. The reporter smiled for the camera and then began the interrogation.

“When did you decide to run for Mayor?” the reporter questioned.

“Why do you think your popularity in Kiev has risen so quickly?”

“Am I popular?” he wondered. “I don’t think that there is anything special about me. I think that people just want to be healed. They want to be listened to and they want to find answers for their lives.”

“How do you heal people?” she asked earnestly.

“I don’t heal people. Faith heals people. If people have faith, they can do anything,” Jesus Josephovich stated. “I help them find faith.”

“If you become Mayor, are you going to heal the sick?”

“I will try to help people even if I don’t become Mayor,” he said.

“Will healing people be a part of your campaign strategy?”

“I don’t have a campaign strategy. I found out that people want me to run for Mayor five minutes ago.”

“What political party will you be running with?”

“I don’t belong to a political party,” he explained.

“Who do you represent?”

“Well, I guess I represent God. And the people,” he considered.

“Was healing the politician’s son a part of your campaign strategy? Did you heal him on national television in order to gain support for your campaign?”

The news reporter paused and stared into the camera.

“Do you have faith?” Jesus Josephovich asked.

She looked at the cameraman. “Are you recording?”

The cameraman held up his thumb to show that he was rolling.

The young reporter cleared her throat nervously and everyone watched to see what the Healer would do.

“Tell me about your problems,” Jesus Josephovich said.

The reporter thought about her physical ailments. “Well, sometimes my back hurts and I get a sharp pain in my lower spine. Also I get really bad headaches and I can’t concentrate. Especially when the weather changes. I can’t even think when I’m in pain like that.”

She looked at Jesus Josephovich to see his reaction. He simply stared at her, unimpressed. She needed to think of something better.

“One of my feet is bigger than the other,” she said slightly embarrassed. “A little bit. One shoe never feels comfortable.”

The cameraman moved his head out from behind the camera and glanced at his colleague’s feet with an amused expression on his face.

“I have a tooth that always bothers me. I had a cavity there, and when I drink something cold it really hurts. Can you heal that?” she asked hesitantly.

Jesus Josephovich touched her hand and stared into her eyes. “Tell me about your husband,” he said.

“My husband?” she said, surprised. “I don’t have a husband.” She began scratching her arms and looking around the room nervously. The cameraman moved closer to them.

“What happened?” she repeated. “What always happens. I was married, young, too young, and we fell out of love. That’s all. It happens.”

Jesus Josephovich shook his head. “You can’t fall out of love,” he said. “Love is not an emotion. It is a connection between people that cannot be broken, because it has always existed, even before you were born, and it will always exist. Even death cannot destroy love.”

The reporter became red with anger. “Then why did he cheat on me?” she screamed. “Why did he sleep with that stupid secretary?”

Everyone in the room froze. The cameraman almost dropped the camera but he manged to keep it steady for the shot.

Jesus Josephovich nodded his head. “Ah yes. Sexual attraction. That is an emotion, and it can change like the seasons. No, even faster, like the rising and setting of the sun. But true love is not an emotion. You do not create it, you discover it. It is there, and it will always be there, if you will search for it.” He paused and looked her in the eye. “Do you still love him? Do you want to forgive him?”

“He still loves you,” Jesus Josephovich assured her. “And you can still love him, if you can forgive him.” He held her hands in his. “True love always forgives. No matter what. You are forgiven, so now you must forgive. But you must understand forgiveness. Forgiveness is not given by you to another. It is accepted by you, when you acknowledge that he is forgiven by God. When you forgive someone, you do not remove a chain from his soul, but from your own soul.”

She dropped the microphone and hugged Jesus Josephovich. All the women in the room cried while all the men stared at the floor awkwardly.

The news reporter looked at the camera which was still recording and she laughed through her tears. “Did you get that?” she asked.

The cameraman gave her the thumbs up.