Chapter 39 of Jesus Josephovich: The Revolution

Published by RChandlerBrown on September 19, 2013 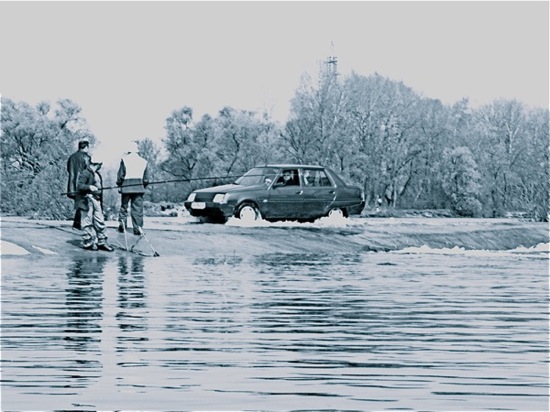 The day after Jesus Josephovich’s skiing adventure, Volodomir and his father Vova decided to take their foreign guest on a traditional Ukrainian male excursion. Vova went into his garage and emerged with several long poles and a small wooden box full of equipment. He proudly held them up for Jesus Josephovich to admire.

“What is this for?” the foreigner wondered.

Katya saw the fishing poles and quickly turned around and went into the next room. She didn’t want to have anything to do with fish or ice. Leosha saw the poles and groaned.

Grandpa Vova frowned as he examined the fishing poles. “I only have three poles,” he said, counting four men.

Leosha’s eye brightened. “That’s okay. I don’t need to go. I’ll play with Katya today,” he shouted breathlessly as he ran into the other room before his father or grandfather had a chance to reply.

“Do you like fishing?” Grandpa Vova asked his foreign guest.

Jesus Josephovich nodded his head. “Some of my best friends were fishermen.”

“Well now you’ll have something to tell your fishermen friends about back home. I’m sure they don’t have ice-fishing in the Middle East.” Grandpa Vova said proudly.

“What is ice-fishing?” Jesus Josephovich asked, noticing that the mention of the activity had decreased the number of people in the room by almost half.

“We go out on the river, cut a hole in the ice, and catch fish,” Grandpa Vova explained cheerfully.

“Sometimes we catch fish,” Volodomir corrected. “Usually we sit around and drink vodka.”

“What do you mean, “sometimes”? I always catch fish,” Grandpa Vova declared defensively. “Last year I caught the biggest fish of the season on the river only a few kilometers from our house. It must have weighed twenty kilograms or more,” he said, measuring an invisible fish with his hands. “That fish fed twenty people.”

After arguing about fish stories, they dressed Jesus Josephovich in a heavy jacket and cloak and gave him thick winter boots and a large square fur hat with flaps that pulled down to cover his ears. When they were finished dressing him, he looked in the mirror and Grandma Olga declared him the first Middle Eastern Eskimo.

They packed their equipment into large wooden crates, loaded them in the car, and drove out to a secret place on the river that Grandpa Vova claimed only he knew about. Of course, when they arrived, there were already ten people sitting out on the ice. They sat like furry statues with one hand on their poles and another hand on a bottle of beer or vodka.

Jesus Josephovich was amazed. “You fish on top of the ice?”

“Of course,” Grandpa Vova said. “Don’t worry. If someone hasn’t fallen in the river yet today, then it’s probably safe.”

A few of the heads slowly turned to look at Grandpa Vova and his guests as they exited the vehicle. One of the furry statues waved and Vova shouted a strange greeting to his old friend. They carried their equipment onto the ice and sat down next to the old fisherman.

“Hello Nikita. How are the fish today?” Grandpa Vova asked.

His old friend shook his head and scowled. “They’re asleep. Like me,” he joked. The fisherman was wearing an extremely aged heavy gray coat and thick black boots that looked like they were fifty years old. He looked like he had been sitting there for a long time in the cold and he smelled strongly of vodka.

The three newcomers opened their crates and took out their poles and bait. Vova took out a rusty old hand-drill and stood over the ice. He looked at his friend’s ice-breaker, a long metal pole with a sharp point at the end and laughed as he started to drill.

“You still use that old thing,” Vova teased.

After several minutes of drilling, he finally finished and proudly invited his son Volodomir and their guest to sit around the hole. They slid their wooden crates around the hole and sat on them like a group of arranged stools.

Vova took out a bag of worms and handed one to Volodomir and Jesus Josephovich. Nikita stared at the foreigner. When the foreigner looked at him he nodded at him to catch his attention.

“If you want to catch the most fish, you have to keep the worms warm,” Nikita said.

“Thanks,” Jesus Josephovich replied. He looked at the tiny warm wriggling in the cold winter air. “How do you keep them warm?”

The old fisherman picked up a worm and made a motion towards his mouth. Jesus Josephovich cringed in disgust as the worm approached the old man’s lips. Nikita stopped suddenly and looked at Vova. They both laughed.

“You think I don’t know how to fish?” Nikita asked, his pride affronted.

“That’s not what I meant,” Volodomir argued.

“Yes, it’s true, sometimes I come out here and fish just to get away from the wife and drink a little, but I always bring home a fish,” Nikita claimed. “Even if I have to buy it in the store.”

Volodomir laughed. “If you don’t get lucky soon, you may have to buy a fish for your wife today too. Otherwise she’ll think you weren’t really fishing. Just drinking with your friends.”

“That might have been possible in the old days,” Nikita acknowledged, “but these days I can’t afford to be buying fish every day. I need to catch some fish so I can eat dinner tonight and maybe sell the extras for a few dollars. These pensions they give us aren’t enough to live on anymore. It’s tough, I tell you. I used to think I had a pretty good life, but now I feel like a poor old beggar.”

“Is it so terrible to be poor?” Jesus Josephovich asked him. “The best men I have ever known were all poor. They considered it a blessing more often than a curse.”

“Sure it’s good to have a simple life,” Nikita agreed, “but when you don’t have basic necessities, it makes life miserable.”

The old man pulled up his fishing pole and saw that the worm was gone again. He lifted the pole angrily onto the ice and baited another worm.

“Today is not my day,” Nikita said pitifully.

“May I tell you a story?” Jesus Josephovich asked.

“So the son found the poorest man in the city and talked with him about his life. The man was a beggar who had been blind from birth. His parents had abandoned him when he was a baby because he wasn’t healthy, and he had been raised by a poor family who found him lying in a basket on the street.

“He couldn’t work and he had very few friends, so the blind beggar never had any money except for what kind people gave him on the street. He used the money to buy bread and clean water and clothes when he had enough. Sometimes the shopkeepers cheated him because he didn’t know how much money he really had, but there was nothing he could do about it. He was used to having nothing.

“After the boy’s encounter with the blind beggar he went home feeling incredibly wealthy. He had a house, a mother and father, friends, food every day, new clothes, comfortable shoes, a good job, and a promising future. He enjoyed his life and he couldn’t think of anything that was missing. In fact, after seeing the blind beggar, he felt like he had more than he deserved, and he almost felt guilty for having so much. At that moment, he realized that he was very rich.

“The next day, however, he visited one of the richest men in the city. Believing that he was himself very rich, he didn’t think that the meeting with the rich man would be very exciting. In fact, he was thinking about visiting the blind beggar again to help him, since he was so rich and the beggar was so poor. Then he saw the rich man’s house.

“The house was enormous, with great pillars lining the entrance and statues of lions and ancient gods guarding the grounds. All around the estate was a large garden with flowers of every variety and even a maze of trees and bushes to get lost in. The rich man’s servants greeted the boy at the door and walked him through a maze of beautifully decorated rooms with extraordinary works of art on the walls and expensive, hand made furniture from around the world.

“When he met the rich man he was amazed by his stylish clothing, the brilliant rings on his fingers, and his seemingly endless knowledge of the best things in life. The rich man talked on and on about things that the boy had never known existed, yet which now appeared to him absolutely essential. The boy wondered how he could have endured such a boring, uncomfortable, uncultured life without all of the things which he now knew, and when he went home after his encounter with the rich man, he felt as if he was the poorest, most deprived person in the entire city.

“When he got home and talked to his father, the boy was very confused, and he said to him, “Father, I don’t understand. When I met the poor beggar I felt like I had more than enough, but when I met at the rich man I felt like I had nothing. Am I rich or am I poor?”

“You can have less than the poorest beggar, yet feel richer and more blessed than the most powerful emperor that ever lived,” his father said. “You can have all the wealth in the world, yet still feel poorer than the helpless beggars you pass by in the street. True wealth does not come from possessions, it comes from within. Therefore, no man can tell you if you are rich or if you are poor. You must tell me – Are you rich or are you poor?”

“So tell me,” Jesus Josephovich requested. “Are you rich or are you poor?”

The old fisherman smiled and sighed. He knew that the foreigner was right, but he didn’t want to give in so easily.

“I’ll feel richer than Abramovich if I can catch a fish today,” Nikita remarked.

Jesus Josephovich examined the ice beneath him. “You should try and fish on the other side,” he said, pointing behind him. “Sometimes a small change can make a big difference.”

Nikita stared at the ice and shook his head amusedly. “Foreigners,” he whispered to himself. “What do they know about fishing?”