Chapter 38 of Jesus Josephovich: The Revolution

Published by RChandlerBrown on September 17, 2013 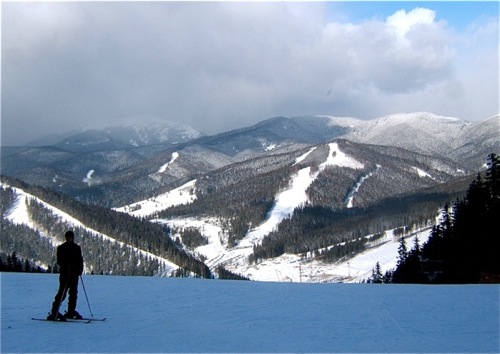 Eventually the neighbors left and the family began planning the fun things they were going to do that week. After discussing many activities which Jesus Josephovich was not very familiar with, they finally reached a consensus.

“You’ve never been skiing?” Leosha replied incredulously. “It’s the best. You slide down a huge mountain covered in snow really fast with long, flat metal things on your feet.”

Jesus Josephovich’s eyes opened wide in amazement. “Is it safe?” he asked.

“Yeah, it’s totally safe. The first time I went snowboarding I broke my wrist and dislocated my shoulder, but now that I know how to do it, I rarely break any bones.”

Katya shook her head at her brother. “Don’t listen to him. Leosha is crazy. As long as you don’t try to snowboard like him, you’ll be fine. You can stay with me – I’m a beginner too.”

The next day Volodomir took his family to a beautiful new ski park in the Carpathian Mountains. After a few hours in a bumpy van driving along winding winter roads past dozens of small towns and snow-covered villages, the family reached their destination. Jesus Josephovich looked out the window and saw a mass of wooden buildings that looked like log cabins, and huge metal machines that perilously dragged thrill seekers up the side of a huge mountain.

They exited the small van and headed over to the ski rental office. Jesus Josephovich was wearing Volodomir’s old skiing gear and he imagined that people might think he looked strange in his outfit, until he saw what the other skiers were wearing. People’s heads and faces were covered by thick masks and beanies, their eyes were protected by bulky bug-eyed goggles, and instead of walking, they were gliding across the snow-covered hills on long, colorful skis and boards.

Some of the people had two long boards, one on each foot, and other people had one wide board where both feet locked into place. The people on the snowboards looked like they were balancing on a fence or standing on a railroad track, and Jesus Josephovich was amazed that anyone could stand on such an apparatus for any significant length of time.

In fact, many people in the crowd could not stand very well on the skis and snowboards, as they illustrated by slipping and falling, running into each other, and grabbing a hold of their friends to keep them from ending up on the ground with their bottoms in the snow. As chaotic as the situation appeared, however, it appeared that most people were genuinely enjoying themselves.

Jesus Josephovich soon noticed that the better someone was at skiing, the stranger the outfits were that they wore. Tall, muscular men were proudly strutting around in matching jackets and pants covered in bright pink, green, and yellow swirls of color. This was quite a departure from the drab, ordinary browns and blacks that all the men wore on the streets of Kiev. Here, audacious color was king.

They ambled through the wildly dressed crowd of adventurers into the rental office to rent skis. The line was huge and everyone was pushing to get to the front. There didn’t seem to be any order in the line, accept that whoever pushed the hardest and yelled the loudest seemed to get served first.

After a long wait and a lot of pushing, Volodomir and his wife finally got some skis to try on, while Leosha and Katya rented snowboards, like many of the other teenagers. Volodomir advised Jesus Josephovich to rent skis instead of a snowboard because he would be less likely to seriously injure himself.

Jesus Josephovich agreed and was handed a pair of brightly colored skis and accompanying boots. There were straps and flaps and strings and clamps everywhere, and the foreigner wasn’t sure if he was looking at a pair of boots or a kind of high-tech weapon.

The ski boots were old and cracked and looked like they had been worn by about a thousand people. Usually, being well worn makes boots more comfortable, but these ski boots were so hard and stiff that Jesus Josephovich couldn’t get his feet into them. Then he realized that he had to undo all of the straps and flaps first. Even then they were still very stiff. He was amazed that people could wear such uncomfortable boots while performing an activity as perilous as sliding down a mountainside on pieces of metal.

Finally, after more than an hour of preparation, they were dressed and ready to ski. They bought all-day passes and got into the long, confused line of people waiting for the ski lift. Instead of standing in a logical, single-file line to get through the gate, the skiers melded into a chaotic mass of people without rules or any discernible order. The line shuffled along slowly, with people’s skis hitting each other and getting tangled and stuck, until they finally reached the electronic gate.

As he made it through the gate, Jesus Josephovich came face to face with a giant flying bench. It nearly hit him in the head, but he ducked beneath it just in time. One of the employees yelled at him and Leosha pulled him back away from the ski lift.

“You have to wait for the chairs to go past,” Leosha said. “Follow me.”

He followed Leosha as he moved behind a chair lift and stood in position with one foot locked into his snowboard while the other foot kept him balanced. A few moments later, another chair swung in behind them and swept them off their feet high into the air.

The view was breathtaking. They floated quietly, the smooth snow several meters beneath them, through a canopy of tall, ice-coated pine trees. They were almost as high as the tops of the trees, and Jesus Josephovich felt like a dove peacefully drifting on the wind. Skiing was beginning to appeal to him. Surely this was why God created mountains.

When they got to the end of the lift, Leosha tapped his foreign guest on the shoulder. “The chair doesn’t stop,” he warned. “You have to jump.”

Jesus Josephovich followed Leosha as he slid off the chair and glided down the small slope. He wasn’t ready for the speed at which he exited the chair and he slid straight down fast, dodging little children and meandering skiers who were blocking his path. Moving forward was actually quite simple, but he quickly realized that it was even more important to know how to stop – which he hadn’t yet mastered.

Leosha rode next to him down the slope and Jesus Josephovich followed him to an enormous hill. Leosha flew down the slopes like a professional, sweeping in and out between the other skiers and snowboarders as if they were moving in slow motion. The faster he went, the more effortless it became, and the motion was so smooth on the slick snow that he almost felt like he was flying.

When they came to the big slope, Jesus Josephovich found himself staring almost straight down a hill dozens of meters high. He considered stopping, but it was already too late. He flew down the slope like lightening. He said a prayer, possibly his last one in this lifetime, as the wind howled past him and ice and snow shot up in large waves from his skis.

He made it to the bottom of the slope alive and simply aimed himself towards where the other skiers seemed to be going, letting his momentum carry him forward. Leosha rode next to him again and complimented him on his extreme ride.

“Wow, that was fast!” Leosha screamed. “Most people ski from side to side, but you went straight down like a speed-skier. That was awesome!”

“Don’t go with her. She’s on the easy slopes,” Leosha said distastefully. But Jesus Josephovich was already on his way to the other side of the mountain.

Hundreds of people were skiing on the mountain. Some adults were working hard learning how to ski and falling all over each other, while some flew past everyone else and looked like they were barely trying. Children were scattered across the slopes like sprinkles on a doughnut, and a few of them sped down the mountain even faster and more effortlessly than the most experienced adults.

Jesus Josephovich found Katya trying to snowboard on the blue slopes marked for beginners. She looked frustrated and didn’t seem to be enjoying herself. They glided down the mountain together and Katya was surprised at how well the foreigner skied. Even though it was his first time, Jesus Josephovich looked like an excellent skier because his body was completely relaxed. It was as if he had no fear, and without fear his body simply did exactly what it needed to do in order to ski. Nothing more and nothing less.

Katya noticed this, and became even more frustrated by her inability to smoothly glide down the slopes. She couldn’t turn well and she kept falling over and landing on her tailbone, which sent a sharp pain shooting like electricity up her spine. After one particularly painful fall, she sat down and slammed her fist in the snow.

“I hate snowboarding. It’s no fun,” Katya screamed angrily. “I just keep falling and hurting myself. Why am I doing this if I’m just hurting myself? What’s the point? I should just go sit in the restaurant and enjoy some tea.”

Jesus Josephovich sat down next to her. “But then you’ll never get to experience the thrill of gliding down the mountain,” he said.

“You’re right. If you quit now, the pain won’t be worth it,” he said as Katya sulked. “Do you know how baby birds learn to fly?” Jesus Josephovich asked. “Their parents hold their food outside of the nest. The baby has to fall out of the nest in order to eat. It hurts itself again and again until it learns to use its wings. Once its wings begin to work, it learns to jump higher and farther out of the nest until it can fly.”

“Great,” Katya said, her face brightening a little. “But I don’t have wings. And this really hurts,” she said as she rubbed her tailbone.

“Pain isn’t always a punishment,” Jesus Josephovich explained. “Sometimes it’s a lesson – a key that unlocks something extraordinary inside of us. If you never fall, you will never soar.”

Jesus held out his hand. Katya slowly took it and stood up.

Katya sighed. “I want to fly,” she said. “And then I want some tea. And I want an icepack for my bottom.”