Chapter 37 of Jesus Josephovich: The Revolution

Published by RChandlerBrown on September 17, 2013 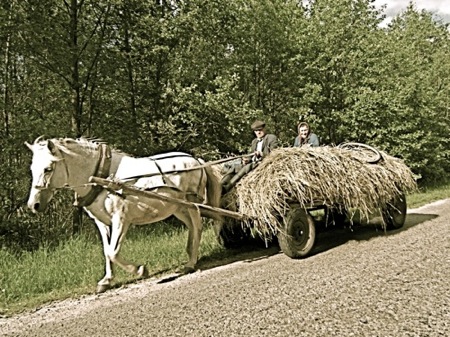 After venturing out into the snow to use the bathroom, which turned out to be not much more than an outdoor closet with a hole in the ground, Jesus Josephovich was happy to be back indoors and warm himself with some hot tea.

The rest of the evening was spent looking through thick Soviet-era photo albums that seemed to go back generations. The photos chronicled every special event and vacation that the family had gone on, and after looking at album after album of photographs, Jesus Josephovich felt as if he had already lived an entire lifetime with Volodomir’s family.

The next day they had a big breakfast together in the dining room as Grandma Olga’s old dog and spry young cat fought over the scraps of food that fell from the table. The dog was small and white, but its hair was stained a reddish-brown and had thinned with age. It was so old that it shook as it walked and every motion appeared excruciatingly difficult to perform. It looked like a giant, anxious rat.

Jesus Josephovich called to the dog and held out a small piece of meat in his hand to feed it.

“She can’t hear you,” the Grandmother said. “She’s deaf. She lost her hearing a long time ago. She’s old but she’s my darling.” Grandma Olga began making strange noises and faces at the dog. She gave it a small piece of potato. “Eat, eat, eat,” she commanded.

“You know Jesus is a healer,” Leosha announced proudly. “Maybe he can make the dog hear again.”

Everyone looked at the dog and Jesus Josephovich willingly held out his hand again to call it to him. The dog hobbled towards the foreigner and then suddenly looked up at Jesus Josephovich in terror. It had felt something strange in that way that only animals can feel, a premonition perhaps, and it began to back away from the foreigner as quickly, or slowly, as it could. It seemed that the old dog in no way wanted to be healed.

The grandmother started talking to the dog in her ingratiating maternal voice, repeating the same commands over and over again even though the dog couldn’t hear. Jesus Josephovich watched the dog’s face and realized that the dog had no desire to be able to hear Grandma Olga’s unending commands. Perhaps the dog had gone deaf for a reason.

After breakfast, the family split off as the kids went to play games and the adults cleaned or fixed things around the house. Around mid-day there was a knock at the door. Grandpa Vova was busy fixing an old chair, when an elderly couple came inside out of the snow.

“Hey, look at Papa Carlo still working hard in the middle of winter,” the boisterous neighbor teased. He was a plump man of average height with a horseshoe shaped hairline, rosy red cheeks and an even brighter red nose – clearly a healthy drinker.

He was followed in by his wife, who was short and hunchbacked and had a face as furrowed as the Grand Canyon. It was a face that only vast eons of time could carve. Her eyes were squinted tight, and the wrinkles on her face had molded her cheeks into a permanent scowl. The universal law of gravity had not been kind to her, and she was therefore not inclined to be kind to the universe.

Grandpa Vova managed a “Hello,” as he finished his work, and Grandma Olga ran out to greet her gossip spouting comrade. Volodomir and his family recoiled at the sound of the old neighbor’s voice – they knew what it meant. The moment she saw Olga, the neighbor’s wife began shouting out as much bad news as she could muster.

“My God, it’s cold outside today. Cold, cold, cold, cold. I’m freezing all day long, I’m wearing two scarves. And the arthritis in my hands is getting worse every day. I can barely wash the dishes any more, only in hot water. Oh my God, what to do, what to do?”

“We have a guest,” Olga said to her vociferous friend. “He’s a foreigner.”

“I know. I saw him through my kitchen window yesterday. Where is he from?” the neighbor asked, squinting at the guest with her critical eyes.

“The Middle East,” Olga said in a hushed whisper.

Her neighbor gasped with fear and excitement. “What is he doing here? Do you think he’s a spy?”

“Oh,” the neighbor exclaimed, looking away from the foreigner.

“He doesn’t eat like a spy,” Olga insisted. “He asked for a second portion of everything. But he didn’t like my holodyets.”

“It never was as good as mine,” her neighbored quipped.

“Says everyone,” her neighbor replied with a proud smirk, as if it were common knowledge.

Jesus Josephovich realized that he was being talked about and he walked over and introduced himself to the Gossip Queen of the neighborhood. She greeted him politely and examined his clothes, hair and beard like a doctor examines a patient. In a brief moment, she had summed him up in her mind.

“You’re probably here to find a pretty blond Ukrainian girl for a wife, eh?” she accused. She turned to Olga and whispered, though it was loud enough that Jesus Josephovich could still hear. “All the Turkish and Egyptian men are always trying to steal pretty Ukrainian girls to take back to their countries and make them their slaves.”

“Actually, I’m not here looking for women,” Jesus Josephovich said without resentment. “I’m here to study Ukraine. To learn about its people and how I can help them.”

“Oh, you’re a scholar,” the old neighbor declared, recalculating her estimation of him to fit this new information. “Well, let me tell you about the Ukrainian people,” she said. “They’re selfish and backstabbing. This new generation, they don’t have any morals. They’re ruining this country.”

The cranky neighbor put her hands on her hips to prepare herself to tell her newest gossip. “Just the other day I saw Tanya Victorovna’s grandson drive into town with a new BMW. A BMW! Now where do you think he got the money for that?”

“He’s a lawyer,” Grandpa Vova shouted from the other room, trying to derail the old woman’s train of thought.

“But he works for the government,” the woman clarified. “I know what a government salary is supposed to be. I think he’s been stealing money from the city, or taking bribes. Last week he bought Tanya Victorovna a new television. A new television! Now what does she need with a new television? That old woman is nearly as blind as your old dog.”

Olga reached down and stroked her frail old companion as it attempted to wag its tail by spasmodically shaking its whole body.

“Was it a big television?” Grandma Olga asked with interest.

“It has to be for her to see it,” Vova shouted mockingly from the next room.

“But I think she knows that I know,” the conspiratorial neighbor confessed. “Last week her dog got into my yard and almost bit my cat. I had to swat it with a broom to get it away from her and I hurt my back. I think she did it on purpose, as a warning.”

“Did you see her put the dog in your yard?” Olga wondered breathlessly.

“No. But I saw her look at me when I was staring at her from my kitchen window that afternoon. She knew. She’s dangerous.”

“The only thing that’s dangerous around here is your mouth,” Vova shouted.

“You tell me why her grandson is bringing her new things. Where is his money coming from?” the neighbor shouted.

“Another’s blessings should be a blessing to all who know them,” Jesus Josephovich stated. “Why aren’t you happy that she is able to have these things?”

“Why should I be happy for her?” the neighbor screeched. “No one brings me anything. Why should she have more than me? I was an engineer. She was just a janitor.”

“Another’s joy should always bring you joy,” the foreigner said. “But your attitude towards your neighbor has transformed her happiness into your own sadness, her joy into your own anger. This is a terrible power,” he warned. “Does it improve your life to be angry at your neighbor?”

The old woman thought about his question. “Not really.”

“Her friend, of course,” the woman replied.

The old woman’s face wrinkled even deeper as she considered all the negative thoughts that she had had about her neighbors. Something clicked inside her and she suddenly realized that the bitterness in her heart was her own creation, but she didn’t know how to get rid of it.

“And if I lose my happiness, how do I get it back again?” she asked humbly.

“I have some Nemiroff in the kitchen,” Grandpa Vova shouted teasingly.

Jesus Josephovich looked at Leosha. “Where is my spiritual warrior?” he said.

Leosha stood proudly beside him. “Here.”

“This woman would like us to show her how to get her happiness back,” Jesus Josephovich said with a wink.

Leosha sighed and moved into position. Jesus Josephovich stood on the left and Leosha stood on the right. The old woman cringed with fear, unsure of what was about to happen to her. Then they moved in and kissed her simultaneously on either side of her face. She screamed with fright and then burst out laughing. Her old husband chuckled.

“You see, it’s quite easy,” Jesus Josephovich declared. “Bring happiness to others, and it will come to you.” He looked at the young boy. “Leosha, do you feel happier?”

“Kind of,” he said as he wiped his lips with his sleeve.

She grinned shyly and leaned down to give Leosha a kiss on the cheek. Leosha recoiled frightfully from the ancient, wrinkled lips.

Leosha pointed at his sister Katya, trying to redirect the old woman’s kiss. “Can she make Katya happy instead? I think she needs it more than me.”