Chapter 36 of Jesus Josephovich: The Revolution

Published by RChandlerBrown on September 16, 2013 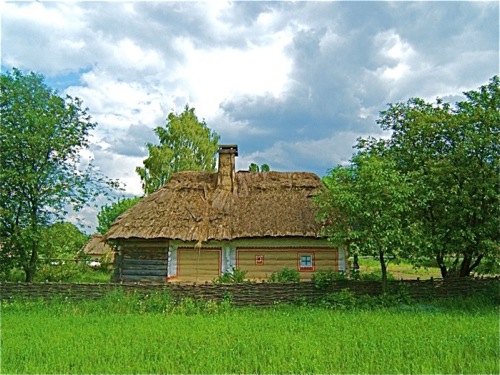 It was quite an ordeal trying to get to sleep on the noisy, smelly, bumpy, hot train, but Jesus Josephovich finally drifted off into a peaceful slumber where he was surrounded by angelic, heavenly visions. A moment later, however, he heard another terrible sound. Loud footsteps stomped heavily through the car and the grouchy train attendant yelled at everyone to wake up and prepare their belongings. They had arrived.

While everyone quickly gathered their baggage, Jesus Josephovich’s neighbors invited him to their homes to eat and made him promise that he would stop by if he had the time. Then they poured off the train in an impatient line, careful not to tumble down the steep metal steps, and finally they breathed in the fresh, cool mountain air.

Volodomir noticed Jesus Josephovich’s puffy face and red eyes. “How did you sleep?” He asked.

“Not well,” the foreigner admitted. “I think I prefer traveling by donkey. It’s less bumpy.”

Volodomir laughed and they gathered at the rear of the line for buses to the villages. They were packed onto a bus with suitcases and bags piled up to the ceiling and had to endure another stuffy two-hour trip along winding, pothole-filled roads through the countryside. A donkey ride was seeming like a better and better idea.

Eventually they arrived in a small village surrounded by large snow-covered hills. They walked down the narrow street until they found their destination, a cozy looking wooden cottage surrounded by an old rusted gate. A fresh blanket of snow made the various farm tools scattered across the yard unidentifiable, giving him the impression of constant hard work, though no work was currently being done.

As they entered the gate, they heard a joyful shout and an old woman came running out of the house and threw her arms around Volodomir and his family, smothering them with kisses and commands. An old dog and a spry young cat ran out of the door between her legs as she shouted at her guests. “My children, my children! Come inside quickly,” she ordered. “Oh, it’s so good to see you! Bring your bags inside. You’re going to freeze to death!”

A plump old man greeted them on the doorstep and laughed as his grandchildren hugged him. “Come inside, come inside,” he said. “I hope you’re all hungry. Your grandmother heard that we will have a foreign guest tonight, so she cooked enough food to feed the entire village.” His big smile showed off a mouth full of bronze teeth.

Jesus Josephovich walked up to the door and greeted Volodomir’s parents. He stuck out his hand and the old man pulled him inside the door to finish the handshake properly.

Volodomir laughed. “We never shake hands across the threshold. It’s bad luck,” he explained. Jesus Josephovich opened his eyes wide in amazement. He had never heard of bad luck coming from a door frame.

After they had unpacked their bags and washed their hands, Grandma Olga pushed them all into the small, but warmly decorated dining room and began filling the table with extravagant dishes of food. “Sit, sit, sit,” she commanded. “You must be hungry after your trip.”

She described each dish in detail as she brought it in, seemingly as proud of the ingredients as of their combination into her fantastic creations. Potatoes, mushrooms, carrots, onions, pork, cucumbers, cabbage, garlic, beetroot – and that was only the salad and the soup.

As she brought in more food, Jesus Josephovich noticed that the old woman had a wonderfully irritating habit of ordering you to do what you were already doing. “Eat, eat, eat,” she instructed joyously as the family began dipping their tiny spoons into large bowls of bright red borsch.

Then she began scooping large spoonfuls of sour cream onto everything: the soup, the meat, and even the salad. Jesus Josephovich put his hand up to stop her.

“You don’t like sour cream?” she asked in surprise.

“I like it, but we don’t eat that much of it where I come from.”

Olga was confused by his response and stared at his plate, unsure of what to do. She handed him a large jar of mayonnaise, and when he refused to cover his salad with mayonnaise, she handed him ketchup.

He put a little ketchup on his potatoes, but it wasn’t enough to satisfy the chef and she watched him eat suspiciously, unconvinced that he could enjoy his meal, as much as she deemed necessary, without a huge heaping of sauce of some kind.

Leosha handed Jesus Josephovich a piece of black bread and slid a small plate with white chunks on it towards him with a suspicious grin on his face. “Put some of this on the bread,” he said mischievously.

Jesus Josephovich looked at the white substance on the plate. It looked like meat, and it smelled like bacon, but it had an oddly smooth consistency. It certainly wasn’t steak or sausage.

He looked up at the faces around him. They were all smiling and smirking knowingly. “What is it?” he asked.

Volodomir smiled and nodded and Jesus Josephovich picked up a piece of the white mystery meat and placed it on the bread. Everyone watched intently as he put it in his mouth and gently began to chew.

“What do you think?” Leosha asked quickly.

“Is it meat?” Jesus Josephovich asked, confused by the softness of the substance. They shook their heads. He spread the white substance around on his tongue, the texture becoming more familiar.

“Is it…fat?” he asked worriedly.

Leosha smiled widely and nodded his head. The others began to giggle.

“It’s pure pig’s fat,” Volodomir explained. “But it’s very healthy for you. Do you like it?”

Jesus Josephovich coughed lightly, but continued chewing. “It’s not bad,” he said, trying to comprehend the fact that he was eating pure fat. The family laughed again.

After the soup and salad and starters, which Jesus Josephovich had mistaken for the entire meal, the grandmother entered the dining room with a large pan filled with a murky gelatinous dish.

“You have to try some of this,” she said. “It’s Volodomir’s favorite.”

She scooped a large portion of the jiggling gray mass onto his plate. “Eat, eat, eat,” she ordered.

Jesus Josephovich took a big bite, expecting it to be a sweet jello-like dessert, but he quickly realized that the substance was once again made of fat. The cold, gelatinous meat paste was a shock to his taste buds. He choked on the mouthful.

Jesus Josephovich swallowed the food and cleared his throat. “I don’t usually eat a lot of pork,” he confessed.

“For religious reasons,” he added, trying to remove the harshness from the chef’s glare.

After they had stuffed themselves as much as possible, in order to please their grandmother’s debaucherous notion of health, they reclined at the table and were treated to tea and chocolates. Grandpa Vova patted his stomach contentedly.

“Thank you for your hospitality,” Jesus Josephovich said. “That meal was truly satisfying.”

“It is our Ukrainian tradition,” Vova said. “We will empty our cupboards for a guest.”

“He didn’t like the holodyets,” Grandma Olga announced, referring to the meat jelly. Grandpa Vova ignored her biased recollection.

“I enjoyed everything,” Jesus Josephovich claimed. “With the joy that your wife received from watching us eat, I felt that I was doing her a service by eating, rather than that she was serving me. That is true hospitality: making your guest feel as if meeting their needs is the source of your joy.”

“Oh, but it’s true,” the grandmother said. “I love it when people enjoy my cooking. It makes me happy when I can do something for our guests.”

Jesus Josephovich smiled. “Well then, you have already discovered one of the secrets to happiness. To make yourself happy, simply make others happy.”

Young Leosha raised his voice across the table. “Why does helping other people make you happy?” he asked, unconvinced.

“When you make another person happy, you dispel the illusion that you cannot make yourself happy,” Jesus Josephovich explained. “You reveal to yourself that the source of happiness is not outside of you, but inside of you, in your heart, where God is.”

“Oh,” Leosha said, realizing he had asked a question whose answer he could not fully comprehend.

“Your hospitality makes me happy, and my happiness makes you happy. Therefore, your own hospitality is the initial cause of your happiness. And I must say that your Ukrainian hospitality is truly wonderful. You have provided everything a man could need to feel at home.”

Vova and his wife smiled proudly at their guest’s judgment. They had proved to themselves and to this foreigner that Ukrainian hospitality lacked nothing.

“Where is the bathroom?” Jesus Josephovich asked innocently.

“Outside,” Grandpa Vova said casually, pointing out the window at a small wooden box covered in ice and snow.

“Outside?” Jesus Josephovich replied. “In the snow?”

Volodomir laughed at his guest’s expression. “Not everything about Ukrainian hospitality is perfect.”