Chapter 35 of Jesus Josephovich: The Revolution

Published by RChandlerBrown on September 15, 2013 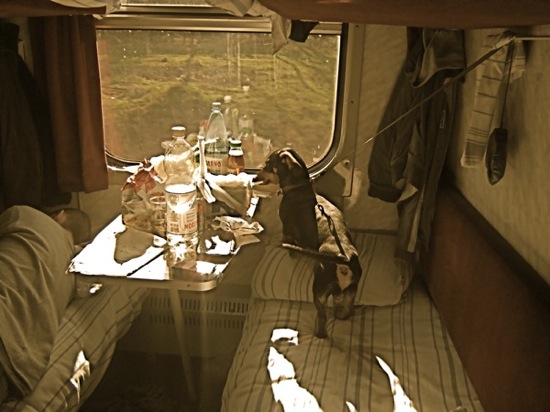 Jesus Josephovich and his new friends on the train talked for many hours about life and love and drinking. The businessman and the soldier took turns telling their best, and sometimes worst, anecdotes until the lights in the train turned off.

They helped the foreigner sort through the plastic bag filled with thin blankets that the train attendant had given him. The small package included tissues, a facial cloth, and sheets for the thin mattress that they unrolled onto his bench. Jesus Josephovich thought that all of these blankets were unnecessary, because it was already so hot and stuffy on the train that he could barely breathe.

Jesus Josephovich’s place was on the top bench next to the wall. He pulled himself up to the top and lay down. The bed was too short for his legs and he couldn’t straighten himself out. He tried to move closer to the window, but a metal bar prevented his head from leaning against the side of the train. There was no way to get comfortable.

He lay still for a while, hoping to quickly drift off to sleep, but it was too hot. He tried to open the window, but it was impossible to open. In winter, the trains were closed up like prisons. There was no escape from the heat.

He turned around in his bed so that his feet were against the cool window and his head was up against the wall. For a moment he was comfortable and he thought he might be able to fall asleep, until the pitter-patter of feet moving towards him caught his attention.

The train car door nearest him opened and then loudly slammed shut. He was in the last place in the car, right next to the door, so when it closed the vibrations from the slamming door shot through the wall into the side of his head and it felt as if someone had punched him in the face. He quickly lifted his head off of his pillow and it crashed into the metal shelf above him. The compartment he was lying in seemed to be designed to make it as difficult as possible to fall asleep.

He heard another door open and close and the sound of running water filled his ears. His bed also shared a wall with the bathroom, so he could hear all of the irritating sounds of the toilet flushing and the sink turning on, and the door opening and closing. Every time one of the dozens of passengers in their car needed to use the toilet, he heard the entire ritual.

As the doors opened and slammed against the side of his bed once again, a terrible, sour smell filled his coupe. The unfortunate traveler pinched his nose and held his breath for a few moments until the smell passed. He covered his head with one of the thin sheets and tried to relax again.

All night long he listened to the rumbling and screeching of the train, passengers walking up and down the aisle, the doors opening and slamming shut, and the toilet flushing. About 3 in the morning, however, he was finally so tired that his mind drifted off to sleep. His body relaxed and he was about to taste the sweet peacefulness of slumber, when suddenly, a terrible noise filled their coupe.

At first it sounded like something was tearing. Then it got louder and louder until he was convinced that a giant pig had boarded the train. The sound echoed off the walls and he squinted his eyes searching desperately through the darkness for the source of the sound.

As his drowsy head cleared with bitter consciousness, he realized that the horrendous sound was coming form his neighbor. The businessman was snoring.

The snore seemed to awaken the same ability in many other passengers, as several other sleeping neighbors began snoring as well. It was impossible for Jesus Josephovich to sleep through such a symphony of nasal artistry. He got out of bed and decided to go to the front to get some tea from the attendant.

“Are you okay?” the soldier asked, as Jesus Josephovich moved out of the coupe.

The soldier shook his head. “No thanks. Nice snoring, huh?” He turned over and tried to go back to sleep while the wheezing chorus continued.

Jesus Josephovich walked cautiously through the dark hallway towards the front, holding on to the metal poles on the sides of the beds when the train rocked right and left. Some of the passengers’ long legs hung over the edge of their beds and he was either tripped or smacked in the face with a smelly foot.

Finally he made it to the front where the surly female attendant was talking to a companion.

“May I have some tea?” Jesus Josephovich requested.

The large woman sighed, slowly stood up and walked into the small kitchen area.

Her coworker was a short, plump man with a bald head who smiled pleasantly. He looked at Jesus Josephovich’s tired face and laughed. “Can’t sleep?”

“Sit down,” he said, inviting the foreigner to sit down. Jesus Josephovich walked into their coupe, which was about the size of a small walk-in closet, and sat next to the cheerful man.

“Are you a foreigner?” the man asked.

Jesus Josephovich nodded his head. “This is my first time on one of your trains.”

The short man laughed loudly and grabbed a bottle of vodka that was sitting on the counter. “You can’t sleep because you didn’t drink enough of this.”

Jesus Josephovich put his hand up to stop the man from pouring more vodka. “That’s okay,” he said. “I’ve had plenty. I don’t need any more.”

The man looked surprised and poured himself a little more from the bottle. The train attendant entered the coupe with a glass in a small metal holder. She handed the hot tea to the foreigner and sat down heavily on the bench next to her companion. She glanced at the traveler indifferently, hoping that he would leave soon. Her companion, however, was excited to have a foreigner to talk to.

The man suddenly sat forward. “I will tell you an anecdote,” he said. “It is about vodka.”

“A man goes into a store and he talks to the cashier. He says, ‘Excuse me. Is your vodka fresh?’ The cashier doesn’t understand him, so she says, ‘What do you mean, fresh?’ The man rubs his head and he says, ‘I bought three bottles of vodka here last night, I drank them all, and now I feel awful!’”

The man laughed hysterically at his own joke, and the attendant sitting next to him rolled her eyes. Jesus Josephovich smiled at the man’s lightheartedness.

Seeing that the foreigner was not laughing as hard as he was, he decided to try again.

“Okay, okay. Here is another one.” The female attendant tried to protest, but he silenced her with a wave of his hand. “A man is talking to his friend. He says, ‘A very strange thing happened to me last night. I was so drunk that I went home and I didn’t recognize my children.’ His friend was shocked and he asked him, ‘What happened? Did you recognize them in the morning?’ The man explained, ‘No. In the morning, I recognized that I was in the wrong house.’”

The man started laughing hysterically again. This time Jesus Josephovich laughed a bit too. The humorist was well pleased with the result. He was considering a few more of his finest anecdotes when the attendant hit him on the shoulder.

“Let him go to sleep,” she ordered grouchily.

Jesus Josephovich took a sip from his tea and looked up to the ceiling. “I know a few stories,” he admitted. “I know that fathers rarely forget their children, but children often don’t recognize the love of their father.”

The man was puzzled. “Tell me an anecdote from your country,” he requested. “Where are you from?”

Finally he sees an old man walking alone on the street. He approaches the old man and tells him that he is an orphan looking for his father. He asks the old man to give him something valuable and the old man smiles at him. He reaches into his bag and hands the boy a single small seed. ‘What is it?’ the boy asked. ‘What do you see?’ the old man replied. ‘I see a seed,’ the boy said. The old man shook his head. ‘You asked me to give you something of value. Look closer.’ The boy examined the seed again, but he didn’t see anything new. ‘I still only see a seed,’ the boy said. The old man smiled and explained, ‘I don’t just see a seed. I see a vineyard!’ The boy took the old man’s hand a said to him, ‘You are my father!’”

The two Ukrainian train attendants sat still for a moment, pondering the meaning of the foreigner’s story. Apparently, this foreigner’s sense of humor was quite different from theirs.

The fat little man laughed, thinking that he understood. “They must love wine in your country,” he said.

“Wine is not the point,” Jesus Josephovich explained. “The point is that God, our true father, sees not only what we are, but what we can become.”

Again the couple was still, unsure how to respond.

“May I give you a seed?” Jesus asked.

Jesus Josephovich took his hand. “You have great joy and generosity in your heart,” he said. “It can grow much further than you ever imagined.”

“Okay,” the man said. As the foreigner touched his hand his mind was opened and he watched himself from a few days ago when he had taught his son a lesson on being generous to others. He saw his son being generous to someone else and the positive effect it had on that person’s life, and he watched as the positive effects spread from person to person, growing in power as it affected more and more people. Before he knew it, he was witnessing the fruit of his generosity benefiting people all over the world whom he had never met before.

He awoke from the trance startled and could barely move his body. He wanted to speak, but there were no words for this moment. He could hardly believe that his positive actions could have such a great impact on the world.

“Build your vineyard,” Jesus Josephovich said to him as he let go of his hand. “Much fruit can come from a single seed.”

The female train attendant stared wildly at her speechless companion. This was the first time she had ever seen him unable to produce a nimble reply. “Do you want some more tea?” she asked their guest awkwardly.

“No thank you. It’s time for me to get some sleep.”

Jesus Josephovich stood up to leave. The man stopped him and held up his bottle.

“Here. Take some vodka. I would not be a good host if I did not give you some,” he begged, unable to express his gratitude in any other way. “Please. Just a little.”

The foreigner reluctantly accepted, with no actual intention of drinking any more, and the grateful man poured some vodka into Jesus Josephovich’s empty tea glass.

Jesus Josephovich carefully made his way back to his bed and laid the glass down on the small table between the beds. The soldier immediately woke up and sniffed the glass.

“Do you have any tea left?” The soldier asked. He smelled the liquid inside the cup and his eyes opened wide. “That’s not tea,” he said joyously. “It’s a miracle! You’ve turned tea into vodka!”