Chapter 32 of Jesus Josephovich: The Revolution

Published by RChandlerBrown on September 13, 2013 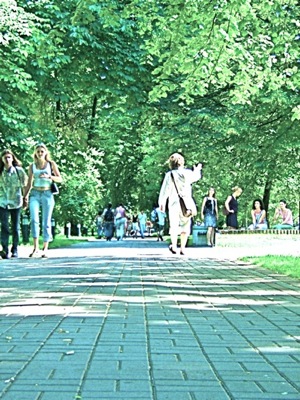 After his encounter with the overly-ambitious public relations agent, Jesus Josephovich was ready for some time alone. The next morning he woke up early and went outside to find a place to pray and watch the sunrise.

The winter morning air was crisp and refreshing after sleeping all night in the stuffy apartment. The sky was clear and the ground was covered with a light layer of snow and frost; just enough to allow Jesus Josephovich to leave paper thin footprints wherever he went.

After his prayer, he sat down on a park bench and listened to the birds and the sounds of the city as it awakened from its temporary hibernation. A woman appeared with a stroller and pushed her baby through the park.

When the woman saw Jesus Josephovich her demeanor changed and she angled her head to sneak a few more looks at him. He was used to this by now, since people often stared at foreigners in Ukraine, but this woman was not merely examining a stranger, she had recognized a celebrity.

The mother slowly made her way towards him on the path and then stopped by the bench next to him. She took out her cell phone as an excuse to stop and then glanced at the foreigner to confirm his identity. She took a photo of him with her cell phone as stealthily as possible.

The woman half-smiled and then summoned up the courage to ask him a question. “Are you the man who was on the news last night?” she asked nonchalantly, as if it were a common question to ask a stranger.

“What do you mean?” Jesus Josephovich replied.

“Did you heal that politician’s son?” she asked.

Jesus Josephovich chuckled. “I didn’t heal anybody. It was their faith that healed them.”

The woman’s face lit up and she grabbed Jesus Josephovich by the arm. “Would you visit my mother?” she pleaded. “She’s very sick and the doctors say that they can’t help her.”

“What do you want me to do?” the foreigner asked perplexedly.

“You can heal her,” the woman said.

Jesus Josephovich held up his hands in defense. “I can’t heal anybody,” he said. “I don’t know any magic. But if she has faith, she can be healed.”

Across the park an elderly couple spotted the woman talking to Jesus Josephovich. They quickly made their way over to him and listened in on the conversation. When they realized it was him, they interrupted.

“Excuse me,” the elderly gentleman said. “Are you the healer?”

The elderly man’s wife barged in. “I have terrible arthritis,” she said. “Can you heal arthritis?” She held out her crippled hands for Jesus Josephovich to see.

“And my heart,” the elderly man suggested. “My heart is all clogged up. I’ve already had two strokes. Could you fix it for me?”

“As I was telling this woman, I am not a magical healer,” Jesus Josephovich tried to explain. “Anything I can do, you can do. But you need faith.”

A few people who were walking their dogs approached the bench and joined the small crowd.

“You poked that politician in the eyes,” said one man who was walking his Doberman.

“You healed his sight, didn’t you?” said the other dog walker.

Soon the crowd grew larger and the requests grew wilder. Jesus Josephovich got up to walk home, but the crowd followed him. By the time he had walked a block, the crowd had doubled in size. People were stopping their cars and jumping out to see him.

“Can you stop my toothache?” yelled an elderly woman.

“Can you heal my kitten?” said a young girl.

“Can I have your autograph?” asked a young boy who stuck a pen and a history textbook in front of Jesus Josephovich’s face.

Jesus Josephovich tried to walk across the road, but the crowd hemmed him in on all sides. He could barely move. People were yelling and pushing and requesting miracles.

“Bless my baby,” said a woman who was holding her child in the air.

“Can you tell me my future?” said another woman.

“Tell me how to win the lottery!” a man shouted as he held a small piece of paper in the air.

An elderly woman in the crowd was suffering from chronic pain in her back. As Jesus Josephovich walked past she reached out and grabbed his hand. She had seen the video footage on the news the night before, and she believed that if she touched his hand she would be healed.

As her skin came in contact with his, she felt the sensation of something in her mind opening and a wave rushed through her that made everything clear in her mind in the blink of an eye. The pain disappeared and she immediately believed that she had been healed.

The elderly woman screamed at the top of her lungs and fell backwards dramatically. A few men in the crowd caught her and helped her stand on her feet. She leaned against them and fanned herself with her hand.

The crowd went crazy. Everyone tried to touch him at the same time. They grabbed pieces of his clothes, held his arms so that he could barely move, and someone even pulled his hair. If the frenzy continued much longer, he was going to be torn apart.

Jesus Josephovich sighed, stopped walking, and began removing his clothing. As his clothing came off, the crowd began to slow down and back away. Soon he was standing in the snow entirely naked with only a small cloth tied around his waist. The crowd made a large circle around him, but no one wanted to get close enough to touch him now.

He looked around at the anxious crowd and tried to make eye contact with each face. “God hears your requests,” he continued, “but it will do nothing for you if God simply gives you everything that you want. You must give it to each other.”

He spread his arms out across the crowd to illustrate, but the people were still waiting for something supernatural to happen. They wanted to see a miracle.

“Look at me,” Jesus Josephovich said, motioning to his quivering skin. “I am a man, like you. I cannot do any magic by myself,” he claimed. “But together, with all of us working together, we can accomplish anything. No miracle is too great.”

“Show us a miracle!” someone shouted. The crowd responded restlessly.

Jesus Josephovich shook his head disappointedly. “Do you still not understand?”

The crowd watched him with their digital cameras and cell phones at the ready. A news van pulled up behind the crowd and a reporter with a large video camera tried to get a shot of the naked foreigner. Another reporter started interviewing the old woman who claimed she had been healed.

“If God were a tree,” Jesus Josephovich said, “you would cut him down, eat his fruit, and build a house out of him. Then His fruit would be gone forever, and you would have missed his true gift,” he explained. “The gift is not in the fruit or in the wood, but in the seed. For in the seed is another tree, just like the first, and as long as it is planted again and again, there will be plenty for all men, forever.”

The crowd quieted and people in the back of the crowd began to slowly disburse. Most of them couldn’t understand what he was trying to teach them. They weren’t there to learn, they were there to see something miraculous. Lectures were not miraculous.

“God is not to be torn to pieces and divided amongst ourselves,” Jesus Josephovich continued. “God is one, as are his people. Your brother’s blessing is your blessing, and your sister’s tragedy is your tragedy. Live as one, and you will live forever.”

Jesus Josephovich continued to speak until the crowd calmed down enough that he was able to get away. He quickly ran back to Volodomir’s apartment, hoping that no one else would recognize him along the way.

As he entered the house, he ran into Katya in the hallway. She scowled at him and yelled into the house. “Dad! Jesus Josephovich is naked again.”

Their guest looked down and realized that he had forgotten to put his clothes back on. He smiled apologetically to the young girl.

Volodomir came to the door and gaped at his guest’s appearance.

“How was your walk?” he asked amusingly.

“If this continues, I will not be able to do my work here,” Jesus Josephovich said sadly.

“Me neither,” said Volodomir. “You keep losing all of my clothes.”