Chapter 30 of Jesus Josephovich: The Revolution

Published by RChandlerBrown on August 9, 2013 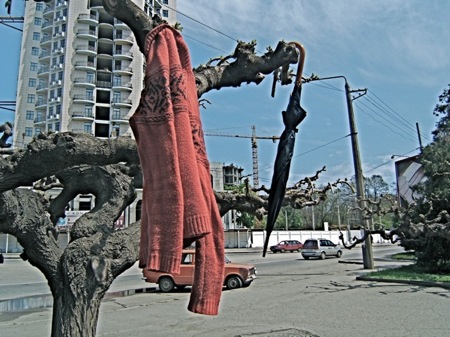 Jesus Josephovich had just simultaneously healed a politician’s nearsightedness and his son’s paralyzed legs. Normally he would feel good about this sort of incident. Unfortunately, it had happened in front of a large crowd, and even worse, in front of the television cameras and news photographers. This was going to be bad. People never took miracles the right way.

The crowds rushed forward to get a glimpse of the politician’s son. The boy was still being held in his father’s arms and within moments of the healing, a thousand digital cameras and cell phones were raised above their heads in order to get a shot of the miracle.

The politician saw what was happening and called his security in to help him and his son escape from the unruly crowd. Jesus Josephovich, Volodomir, Leosha, and the campaign manager all followed him through the crowd and into a large black sedan.

Bulbs flashed and video cameras rolled as they drove away in the darkly tinted car. Volodomir and Leosha were shaking with excitement. Jesus Josephovich looked at them and smiled.

“Oops,” he said. “Remind me not to help people be healed in public places. It attracts too much attention.”

“What do you mean?” Leosha said. “That was awesome!”

“But look at what happened,” Jesus Josephovich said, pointing out the window at the crowd that still pursued them with their cameras. “Those people didn’t gain a desire to love one another more. They gained a desire for miracles, for power. That’s not going to help them.”

“I disagree,” said the politician. “Those people are inspired. They have seen a miracle!”

“It wasn’t a miracle,” Jesus Josephovich claimed. “Your faith healed you. Not me.”

The politician waved his hand in the air dismissively. “To them, and to me, it was a miracle.” The politician’s son, Sasha, stared wide-eyed at Jesus Josephovich as if he were looking at a superhero in real life. It was clear that he believed the foreigner had performed a miraculous healing.

Jesus Josephovich looked at the boy and his father. “Everything that I have done, other men can do as well,” he asserted.

The politician shook his head in amazement. “Teach me how to heal people, so that I can help the people of this city,” he said greedily.

“Trust me,” Jesus Josephovich said, “the ability to heal people is not something that you want. The ability to help people heal themselves is much more useful.”

The politician leaned closer to Jesus Josephovich. His voice was an excited whisper. “That crowd would do whatever you asked them,” the politician stated, his eyes growing wider each moment as he considered the possibilities of such power.

“Maybe,” Jesus Josephovich said. “But is that what you really want? Blind obedience?”

“Politics is an impossible profession,” the politician said. “You can’t help the people in the ways they need to be helped, because the people don’t understand what they need. They don’t know what’s best for them.”

“Are you sure they don’t know?” Jesus Josephovich asked.

“The people believe all the lies that the other political parties tell them. They want gimmicks and catch phrases – not real change. They’re afraid of real change,” the politician explained. “So, in order to compete, we have to give them lies and gimmicks and compromise.” The politician shook his head frustratingly. Then he stared at Jesus Josephovich. “But you could help change all of that. With your help we could give them something real.”

“Hope,” the politician said. “Think about it. If the people believe that God is with them, that God is with our party, then there is nothing that we can’t do. The people will do whatever we say and we’ll be able to organize society the way it needs to be, the way that will be best for our people.”

Jesus Josephovich scratched his chin and considered the politician’s words. “And how do you know that your government will always do what is best for the people?”

“Do you know what the problem is with politics these days?” the politician asked. “There are too many players, too many groups fighting for power, too many ideologies trying to shape the country at the same time. No one can put their ideas into practice because everyone has to compromise. What we’re left with after all the compromises is a bunch of inadequate laws and institutions that aren’t strong enough to get the job done.”

“Some people would say that compromise is a good thing,” Volodomir interrupted. “It ensures that no one gets too powerful. Remember Stalin?”

“Stalin did some terrible things,” the politician admitted, “but look at what he was able to accomplish when he had the entire country working towards one purpose. He made the Soviet Union a world power because he never had to compromise.”

“He also never had to compete,” Volodomir added. “Competition can slow things down, but it also ensures that things are as good as they can possibly be. Competition is as essential in politics as it is in economics. Maybe if Stalin had had some competition to keep him honest, he wouldn’t have killed millions of people.”

“What do you think, Jesus Josephovich?” the politician asked. “Is it better to have a government that can do anything it needs to do in order to get the job done, or do you think it is better to make constant compromises?”

Jesus Josephovich leaned forward and touched Sasha’s hair. Sasha was kicking his legs back and forth, testing his muscles, recalling how to use his legs again.

“Do you love your mother?” Jesus Josephovich asked Sasha.

Sasha nodded his head vigorously and smiled at his father. “Yes.”

“Is she mean sometimes?” Jesus Josephovich asked. “Does she yell at you sometimes?”

Sasha nodded his head. “Sometimes,” he said. “When she’s tired.”

“Do you always obey her, or does she make compromises with you?”

Sasha kicked his legs even harder as he thought about the question. “Sometimes I have to do what she says, but sometimes she let’s me do things if I ask her nicely.”

Jesus Josephovich smiled. “Do you like it when your mother tells you what to do?”

Sasha shook his head. “No.”

“Why do you obey her?” Jesus Josephovich continued.

Sasha grinned and glanced at his father again. “Because I know she loves me.”

Jesus Josephovich looked at the politician and motioned towards his son. “He obeys his mother because he loves her, and sometimes she makes compromises with him because she loves him. But can you ever expect the same relationship to exist between a government and a man?”

The politician shrugged his shoulders. “Perhaps if a leader truly loved the people.”

“A government cannot love,” Jesus Josephovich said. “Only people can love. If you truly want to help your people, then do not look to any government for the answers. Look inside your own heart and discover what stops you from loving others. Then love. Help others do the same. This will change your people.”

The politician nodded in agreement. “I think you are right. I want to love people. If you give me this power to heal them, then I will be able to help them.”

The politician rubbed his hands together nervously. “But if I were able to heal someone, it would be much more powerful than anything I could do on my own. If I just love them, then maybe they will be happier, but if I can heal them, it would change them forever.”

“What is the real God?” the politician asked.

“You know what he is,” Jesus Josephovich said. “God is love.”