Chapter 28 of Jesus Josephovich: The Revolution

Published by RChandlerBrown on August 1, 2013 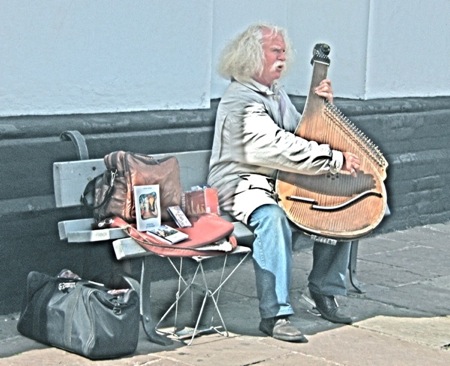 Jesus Josephovich and the group of homeless drunks were causing quite a scene in the passageway beneath the street which led to the Kontraktova Metro station. The strange looking men were talking lively, embracing, and slapping each other on the back like old friends.

They were congratulating Jesus Josephovich and one another on his encounter with the runaway orphan, Natalya. He had convinced her to get help in order to get off the streets and out of prostitution and she had already made a phone call to an organization which had agreed to help her. Now they were eating snacks they had purchased to celebrate her first step in her new life.

The bums had gathered their money together and purchased a small cake and several non-alcoholic beers. One of them had also purchased several odd-shaped rolls of thin bread stuffed with vegetables, meat, and sauce. He handed one to Jesus Josephovich with a smile.

“What’s this?” Jesus Josephovich asked, staring at the unique food.

“It’s called a shawarma,” the man explained. “Try it. I think you’ll like it.”

Jesus Josephovich took a bite and some of the sauce spilled all over the ground. He dodged the spilling sauce and nodded his head pleasantly. “It’s not bad. What kind of meat is it?”

The homeless man shrugged his shoulders. “Don’t ask. It’s better not to know.”

Jesus Josephovich’s eyes widened as he stared into the mysterious tortilla.

As the group continued to celebrate, Jesus Josephovich noticed that one of the homeless men was standing alone in a corner away from the rest of the group. The man had a thin, nervous face and anxious eyes. It was clear that he was very uncomfortable.

Jesus Josephovich walked over to the man and offered him his shawarma. The man shook his head.

“Those aren’t healthy,” he said. “I’d rather not eat anything.”

“A man who eats bad food will be unhealthy, but a man who eats nothing will be dead,” Jesus Josephovich said with a grin.

He held out the shawarma once again. The man smiled and took a bite.

“Are you okay?” Jesus Josephovich asked. “You look upset.”

The man’s thin face froze and his breathing stopped for an instant. He nervously pulled Jesus Josephovich closer to him. He tried to say something several times, but he couldn’t get it out. Finally the words came.

“I – I’ve done bad things,” he said. “Like her.” He nodded his head towards the young prostitute. “I’ve paid young women like her to do things.”

The homeless man was terribly embarrassed and his voice cracked as he tried to speak the truth. He stopped talking and cleared his throat nervously.

Jesus Josephovich put his hand gently on the man’s shoulder and felt the depth of the man’s pain. He understood what he feared and he nodded for him to continue.

“I want to be good, I really do; but I do bad things,” the bum said. “I can’t be good. I’ve sinned too much. It’s too late for me, I think.” He looked around with a defeated expression sunken into his face.

“Jenya, if the purpose of life was not to sin, then God could simply create nothing, and then there would be no sin,” Jesus Josephovich stated. “Or he could take away our free will, make us his slaves, like robots, and again there would be no sin. But do you think that is what the Creator wants?”

The homeless man shook his head. “No. But I’m afraid,” he confessed. “I’m afraid that if I try to be good, I will do bad things again. I’ve tried to stop drinking many times, and I’ve always gone back to the bottle again in the end. It’s like that with many things for me – drugs, stealing…sex. It would be better to die than to keep failing, wouldn’t it?”

“Have you ever had a farm or a garden?” Jesus Josephovich asked.

The homeless man nodded. “My father was a farmer.”

Jesus Josephovich smiled and began his story. “A farmer raised his son and taught him all the rules of farming. He taught him how to till the earth, how to plant the seeds, how to feed them, how to get rid of pests, and when to harvest the crops. He also told him all the big mistakes he should avoid. If he followed all these rules, the son would be likely to have a good harvest.

“When the boy had his own farm, however, he became so afraid of making mistakes, that he didn’t do anything at all. He didn’t want any failure of the crops to be his fault, so he simply threw the seeds on the ground and let them grow however fate allowed.

“If he had been working hard according to his father’s instructions, he could have fixed any problems that had arisen, and any mistakes that he might have made could have been corrected. But because he had done nothing, he had forgotten how to work properly, he had no motivation, he had become lazy. Now, even if he wanted to fix his farm, he was incapable of doing it.

Jenya seemed to relax a little and sighed deeply. “I understand,” he said pensively. “But I’m still afraid. I’m afraid that if I make a mistake, if I’m not perfect, then I’ll give up again.”

“Perfect?” Jesus Josephovich said shaking his head. “Perfection is not the absence of sin, but the presence of complete goodness. One cannot reach perfection simply by avoiding sin. You must strive to find opportunities to create goodness in your life and in the lives of others. A perfect person is not incapable of sinning. A perfect person simply has so much goodness inside of them that there is no room left for bad things.”

“But can a bad person do good things?” the man wondered, glancing at the young girl out of the corner of his eye. The homeless man felt as if in some way his desires had caused part of her suffering. The girl’s presence would not let him stop feeling the guilt of his past immoral acts.

The shy homeless man scratched his head, trying to understand this new perspective. Jenya had always felt guilty about his life for some reason, so he had always simply tried to minimize his negative impact on the world around him. He never considered that he might be able to have a positive effect on the world.

“Love,” Jesus Josephovich answered simply. “If you are loving someone, then you can’t sin. Sin and love are opposites. If you are afraid to sin, then you must simply love someone at every moment. Then you will never sin.”

“And if I do sin?” Jenya asked timidly.

“Sin is nothing but a barrier between us and the best possible life. Sin gets in the way of love. You must remember that the purpose of life is not to not sin, but to produce love. Therefore, if you sin, stop, and then love.”

“You know I used to pray every day that God would kill me,” Jenya admitted, his eyes watering. “That way I wouldn’t sin any more.”

Jesus looked at him sympathetically and touched his hand. “Part of you does need to die,” Jesus agreed. “Your guilt.” He softly placed his hand on Jenya’s heart and stared into his eyes as if looking right into his soul. “God forgives you,” he whispered.

Jenya gasped as something like a fog lifted off his heart and mind. For a brief moment he saw himself as God saw him: as a soul. As a perfect, blameless being. It was his body that had sinned, not his soul. His soul was as clean as the day he was born. It had always been that way, but now he could feel it. It felt like being born again.

Jenya’s past failings and problems seemed to disappear, melting into a distant place in the back of his mind. He didn’t know why, but he felt free. His nervous twitches stopped and his entire demeanor became peaceful and calm.

Jesus Josephovich turned his head and looked at the poor runaway orphan who was talking and laughing with the other homeless men. He looked back at Jenya and winked. Jenya understood. He nodded, took a deep breath, and walked over to the orphan. From that moment on, Jenya thought, he would have a new purpose in life: to help that young girl.

As that thought crossed his mind, a strange feeling wormed its way up through his abdomen and into his chest flowing through his heart as naturally as his lifeblood, and he realized what was happening to him: it was love.