Chapter 27 of Jesus Josephovich: The Revolution

Published by RChandlerBrown on July 30, 2013 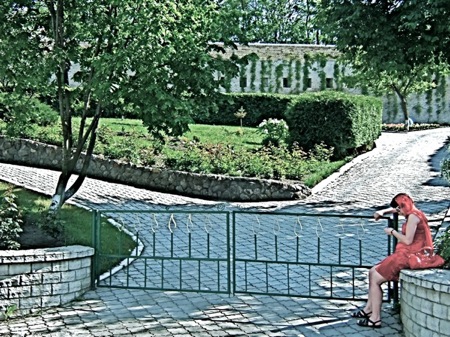 The Communist Party campaign manager got as much information about Jesus Josephovich as he could, and Volodomir finally helped him understand what the foreigner had been talking about when he kept mentioning “love for all men”, to the great relief of the campaign manager.

As they were discussing the situation further with the manager, a small group of shabbily dressed men, who were led by a dirty bum in a beautiful Italian leather coat, which did not at all fit his appearance, interrupted the conversation. The man in the leather coat shouted when he saw Jesus Josephovich and greeted the man with a hug and a kiss on either cheek.

“Here he is!” the finely dressed bum shouted. “This is the man I’ve been telling you about. Jesus Josephovich.”

Jesus Josephovich recognized him instantly. It was the drunken man he had spoken to earlier in the week. He had given the man his new Italian leather coat in the hopes that it would not only keep the man warm as he slept on the metro stairs in winter, but that it would also lend the man some confidence in the fact that God could still use him. Apparently it had worked.

The men in the group behind him were all shabbily dressed homeless men with scraggly beards who had more teeth missing than were left in their smiles. They smelled of body odor and other unmentionable things, but there was something different about this group of bums from other homeless people on the street. They were happy, almost child-like, and they were talking to each other like nothing was out of the ordinary about a group of homeless men out for a night on the town.

They greeted Jesus Josephovich and shook his hand as if they were being introduced to the President. The other people in the crowd backed away from the smelly mob, but Jesus welcomed them proudly.

“So you’re the crazy man who gave Ivan Andreyevich his coat,” said one of the men.

Jesus Jospehvich smiled with pride. “Ivan!” he shouted with joy. “You look fantastic. Are these your friends?”

“They are now,” Ivan Andreyevich replied. “I did just like you said. I’ve been sharing my drinks with these fellows here, and we haven’t stopped talking for three days. I tell you, I haven’t felt better than this in years. I feel like I can actually help someone. I feel like I have a purpose again.” As Ivan spoke, tears began to fill his eyes.

Jesus Josephovich put his hands on Ivan’s shoulders and nodded his head. “Well done,” he said. “I told you that you had something to give.”

“And you wouldn’t believe it, but the other day two large men came out of an alley and threw money at me. Then today on our way to find you a man came out of a casino and gave each of us $1000. Every day is a new blessing from God!” Ivan declared.

Volodomir stepped forward, but not too close, and smiled at the homeless troop. “So this is the man you gave the coat to.”

“As you can see, it was well worth it,” Jesus Josephovich stated.

Volodomir raised his eyebrows awkwardly, in an attempt to agree with Jesus’ assessment, but he was less than convinced. His son Leosha stifled a laugh.

“We would love to chat about what we’ve been doing,” Ivan said, “but we actually need your help.”

“There’s someone we want you to meet,” one of the homeless men said. “Someone who needs your help even more than we do.”

Jesus Josephovich agreed to help them. He said goodbye to the crowd and to the campaign manager, who was quite upset to see him go, and followed the men through the tunnels beneath the street into the Metro. They took the Metro two stations to Metro Kontractova Ploscha and exited the train.

Near the station, in the tunnels under the street, they found a young girl who was sitting on a cardboard box, with a beer in her hand, silently watching the crowds walk past. She was probably 15 or 16 years old, but she was so malnourished and thin that she could have been mistaken for a 12 year old. Her hair and clothes were black and her eyes were encased in thick circles of dark makeup. She smelled like cigarettes.

She saw the group of old homeless men coming and smirked coldly. Then she saw Jesus Josephovich and her face turned hard. She was not in the mood to meet new people, especially foreigners.

“Natalya,” said one of the old men. “We want you to meet the man who helped us. This is Jesus Josephovich.”

The girl scrunched her eyes at the name and nodded hello. Jesus Josephovich tried to smile at her sincerely, but she barely even glanced at him.

“He’s here to help you,” said Ivan, frustrated that the girl was not being friendly.

“But yesterday you told us – ”

The group of men looked at Jesus Josephovich and began whispering in his ear.

“She’s an orphan,” one of the bums said. “She ran away from the government school and she’s living on the street.”

“She’s been making money… with her body,” Ivan whispered.

The girl suddenly became angry at their comments and cursed at them. “What do you know? Just leave me alone! How can you help me?”

“Is it true that you ran away from your school?” Jesus Josephovich asked.

“Do you want to know why I ran away?” she asked with morbid pride. “They raped me,” she said. “The boys at the orphanage. They do it to many of the girls when they are young. Some of us they never stop raping.”

The men were stunned silent. They stood uncomfortably still as Natalya looked at them. In that moment, they hated the fact that they were men.

Jesus Josephovich, however, was unfazed by her story. He knelt next to her on the ground. “I don’t blame you for leaving that place.”

“They raped me for free at the orphanage. At least now I get paid for it,” she said.

“There’s a group that can help her,” Ivan noted. “A charity group that helps street kids. They offered to help her, but she doesn’t want to go.”

“How do you feel about your situation?” Jesus Josephovich asked her. “Do you want to continue doing these things?”

“What else can I do?” she asked stubbornly. “Become a waitress?”

“Do you feel guilty about what you’re doing?” Jesus Josephovich wondered.

“No,” she said defiantly.

“Did you feel guilty when they raped you for the first time at the orphanage?”

The girl’s face froze and she looked down at her feet. “Yes,” she said, her mouth trembling.

“It’s interesting that you would feel guilty about something that someone else did to you, but you don’t feel guilty when it’s your own choice.”

Natalya stared into the beer bottle between her hands. “I don’t know why I felt that way. I was stupid. Now I don’t feel like I have any other choice. But then, when I was young, I thought that if this terrible thing was happening to me, then I must have done something wrong to deserve it.” She cleared her throat with difficulty.

“The innocence and humility of youth,” Jesus Josephovich said. “Children would rather blame themselves than admit that the people they love are harming them.”

Jesus Josephovich sat next to her against the wall. “Can I have a sip of your beer?” he asked.

“Okay,” she said, surprised. She gave him the bottle. Ivan smiled to his friends as he watched Jesus try to encourage her the way he had encouraged Ivan.

Jesus Josephovich took a sip of the beer, handed it back to her, and leaned his head against the wall. “I want to tell you a story,” he said. “A wise Prince was searching for a Princess. He had two choices. One Princess was rich and beautiful and she had many suitors, but her good position in society made her arrogant. The other Princess was poor and ugly, and no one wanted to marry her. She knew this and it made her angry and moody, but in her heart she was humble and caring. Which Princess did the wise Prince choose?”

Natalya grimaced. “The beautiful one, of course.”

Jesus Josephovich shook his head. “The wise Prince chose the poor and humble girl, because he knew she would be loyal to him always. It was difficult at first, because she was not accustomed to being loved, but after a few years his love transformed her into a woman who was even more beautiful than the first Princess, because the goodness inside of her radiated from within like a bright light. Everyone who saw her was amazed, and she was completely loyal to him because it was his love that had made her beautiful.”

The girl was touched, but she attempted not to show it. “It’s a fairytale,” she reasoned.

“It’s you,” Jesus Josephovich said. “God wants to love you. His love will transform you. And I know that he will be more excited about helping you change your life than about a hundred beautiful girls whose lives are already easy and comfortable. It is because he knows that if you change, you will be loyal to him forever.”

There was a tear in the girl’s eye. She quickly wiped it away and sighed deeply.

Jesus Josephovich knelt on one knee and held her hand. “Do you accept God’s love?” he proposed.

The girl looked around at the group of homeless men, watching in anticipation. They looked so anxious that it almost made her laugh. She wiped her tears again and looked Jesus Josephovich in the eye.