Chapter 26 of Jesus Josephovich: The Revolution

Published by RChandlerBrown on July 29, 2013 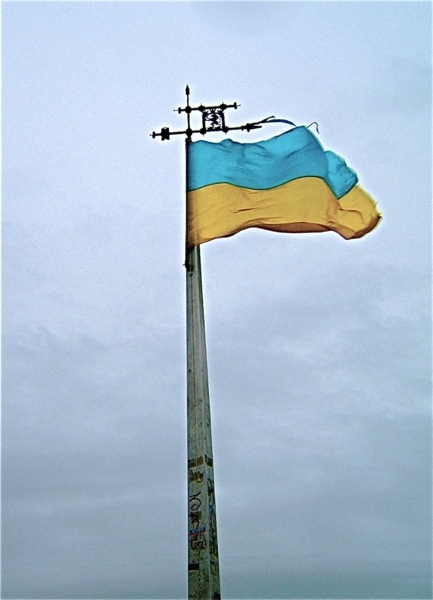 Jesus Josephovich quickly found himself surrounded by a crowd of people at the Communist protest. The contrast between the harsh and angry protesters and the foreigner’s genuine care for people brought many interested listeners to Jesus.

No one knew exactly why he was there, but his discussions were so interesting that they couldn’t leave. He didn’t care about politics and he wasn’t asking for anything from anybody. He was there because he wanted to be, and they all felt as if he had something special to say personally to each one of them.

No matter how much he talked about real life, however, someone in the crowd would always try to bring the conversation back to politics. Maybe it was because of the giant “NATO” protest signs or the pro-Communist banners hanging all over the tents, but politics seemed an inescapable obsession.

Volodomir and his family waited for a while listening to Jesus Josephovich talk to the people at the rally, but eventually Elena and Katya got bored and decided to continue shopping. Volodomir stayed at the rally to make sure that nothing bad happened to his guest, and his son Leosha stayed with him in case something interesting happened that he didn’t want to miss, like a fight.

One of the bystanders, an older gentleman in a long black coat and a round black hat, tried to steer the discussion back to politics. “Our political situation is terrible,” the man said. “Should we just destroy our system and start again?”

“What government is perfect? In which country does it rule?” Jesus Josephovich asked. “If one of you knows a perfect man, then come, let him rule not only this country, but the whole world as well.”

No one answered Jesus’ challenge.

“And where is the perfect law?” Jesus Josephovich replied. “Where is the law that prevents all men from harming one another? Where is the rule that keeps all men honest?”

“There is no such law,” the man answered. “It’s impossible.”

“There is such a law,” Jesus Josephovich stated. “This law is love. But it is neither a prohibition nor an obligation. Therefore, who can write such a law? I tell you, it cannot be written, it must be shown.”

A young man with wild tattoos on his body and piercings in his nose and eyebrow pushed his way to the center of the crowd. “In that case, we shouldn’t have any laws at all,” the young anarchist said. “We should let everyone do whatever they want to do. Why should we have to obey a government that doesn’t do what we want it to do? There is no perfect government, so there shouldn’t be any government at all.”

The crowd pushed in closer to hear the wild-looking young man. The anarchist’s presence seemed to heighten the nerves of everyone in the crowd. The police moved closer to the crowd. Leosha watched hopefully for any potential violent outbreaks.

“Only God is perfect,” Jesus Josephovich replied. “Therefore, to expect something other than God to be perfect is not only irrational, it is blasphemous.”

“But wouldn’t it be better not to have a government, than to have one that cheats the people?” the anarchist suggested.

“Somehow we imagine that a system made of people will have none of the faults of people.” Jesus Josephovich said. “Before you can judge a group of men, however, you must understand and judge yourself. Ask the same question of yourself then: is it better for me to live imperfectly according to certain rules, or to live with no rules at all?”

“I would rather live without any rules,” said the anarchist. “Then no one can tell me what to do. I don’t think society would degenerate and fall apart without a government. Do you?” the anarchist wondered.

“Again, you are trying to answer a question about all people,” Jesus Josephovich said. “We ask questions about governments because we are afraid to ask questions about our own lives. What you should be doing is answering the question for yourself. Do I have a purpose for my life?”

“I don’t need a purpose,” the young man said enthusiastically. “I just do whatever I want.”

“You may want to reconsider,” Jesus Josephovich warned. “A life without a purpose is like a car without a road.”

“Well if it’s a Ukrainian road then it still won’t help very much,” the anarchist joked.

Another man joined the conversation. He was a tall and confident businessman in his mid-thirties. He was wearing a nice suit and a thick black coat that almost touched the ground. The anarchist was clearly annoyed by his interruption and Leosha once again was on the lookout for a good quarrel.

“Capitalism is the only true way for a nation to prosper,” the businessman said loudly. “It is the richest political system in the world, so it is obviously the best.”

The people were silent as they considered this idea.

Jesus Josephovich continued. “Money doesn’t do any of the things we want. Money is merely a guarantee that when we have done what we promised, we will receive what has been promised to us. But it is an empty promise.”

“But without money, we couldn’t have a civilized society. You can’t barter with buildings and cars,” the businessman said.

“Probably the father,” the businessman admitted.

“Because he loves his son.”

“What is it that you really want?” Jesus Josephovich asked the crowd. “People want money because they think it will bring them the things they want. They think it will give them material possessions, peace of mind, security, opportunities. But what if we gave each other something worth even more than all of these things rather than money? What if we gave each other love? Is there anything more valuable? Is there any stronger motivation?”

“But you can’t love everybody,” the businessman said.

“Were you here during the revolution?” Jesus Josephovich asked.

“And did you love all the people around you?”

“I did,” the businessman admitted, as he recalled that special time when everyone was united in purpose and in thought, and when everyone, even complete strangers, felt like brothers and sisters.

“Then it is possible,” Jesus Josephovich said. He climbed onto the base of a large statue, turned to the crowd and spread his arms.

“Look at the things that man has built for money,” he said. “Imagine what man could do for love. If every man loved every man, what could mankind build?”

The entire crowd paused and seemed to relax as this idea flowed through their minds. Suddenly a short, fat man grabbed Jesus Josephovich by the arm and pulled him away from the crowd. He smiled greedily and never looked the foreigner in the eye as he spoke.

“Jesus Josephovich,” the fat man said as if he had known him for years. He vigorously shook the foreigner’s hand while scanning the crowd. “You are putting on quite a show. You’ve attracted more people then our entire protest. How would you like to work for our campaign?”

“Who are you?” Jesus Josephovich asked, confused by the interruption.

“I am the manager of this campaign. We have powerful supporters. We can pay you well,” he added in a whisper.

Jesus Josephovich put his arm tenderly around the nervous fat man. “Can you pay me in love?”

The pudgy campaign manager laughed loudly. “Of course we can. We can pay you in any way you desire. Do you prefer blondes or brunettes?” he whispered.

Jesus Josephovich gave his friend Volodomir a confused look. Volodomir put his hand to his head, embarrassed. Little Leosha started giggling; this was even better than a fight.

He turned back to the campaign manager. “Maybe you don’t understand. My love is for all men.”

The campaign manager’s plump round eyes opened wide and he froze momentarily. He giggled nervously and looked around at the crowd. “Oh. You’re one of those,” he said. “It’s not a problem. We can get you whatever, or whoever, makes you happy,” he whispered.

“Then I would like to start with you,” Jesus Josephovich said.

“What do you mean?” the portly man replied worriedly.

“I must show you how to love all men,” Jesus Josephovich said.

For the first time in a long time the campaign manager was speechless.