Chapter 25 of Jesus Josephovich: The Revolution

Published by RChandlerBrown on July 28, 2013 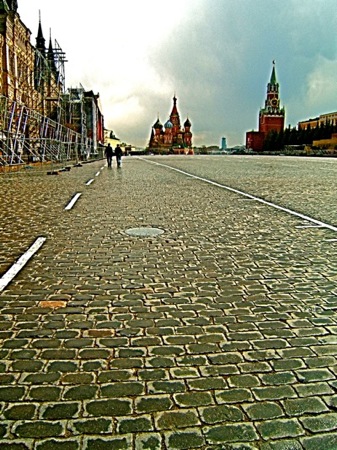 Jesus Josephovich returned to Volodomir and his family with his winnings from the casino. They were more than a little bit shocked when he reached into his pocket and handed Katya several large bills.

“For the cell phone,” Jesus Josephovich said with a smile.

“Where did you get the money?” Leosha wondered.

The family walked out of the Globus underground mall and into Independence Square. The entire square was covered with a thin layer of bright white snow and the soft gray sky enveloped the city in a feeling of quiet peacefulness. This tranquil view was almost completely disrupted, however, by a giant stage set up on one side of the street with massive banners proclaiming, “NATO – NO!”, from which loud Soviet style music was being trumpeted across the square. On the other side of the street, a large group of people was gathered waving red flags and occupying tents while shouting at pedestrians.

“Who are they?” Jesus Josephovich inquired.

“Those are the Communists,” Volodomir said with displeasure. “We should stay away from them. It’s not good for a foreigner to be there.”

“What do they want?” Jesus Josephovich questioned further.

“They want things to be the way they were under Communism. They don’t like the current political system. But it’s all just politics anyway. They were paid a lot of money to stand out there and yell.”

Jesus Josephovich quickly walked across the street towards the crowd with the red banners. Volodomir tried to stop him but it was too late. He begrudgingly followed behind the foreigner at a distance hoping that Jesus wouldn’t get himself into trouble.

Some old men saw the foreigner walking towards them and began to yell at him, “NATO, NO! Go home Yankee Foreigners!”

Jesus Josephovich walked up to them and smiled politely. “What’s a Yankee?” he asked.

“You’re not an American?” they questioned.

“My God,” an old woman yelled. “Then you must understand why we don’t want America interfering in our country. Look what they have done to the Middle East!”

The other protesters noticed that a foreigner was talking to some of the people in their group, and they began to gather around him to listen and see if they could shout out a few words of their own opinions.

“What have they done?” Jesus Josephovich asked innocently.

“War,” an old man said. “They start wars and they steal oil.”

“War is always a terrible thing,” Jesus Josephovich agreed. “And yet, our countries often take more pride in it than in anything else.”

Another old man came into the group. He stood very close to the foreigner as he talked. His breath smelled like beer. Jesus Josephovich wasn’t sure if the man was angry at him, or if he was just so old that he had to stand very close to him in order to hear.

“What do you want?” Jesus Josephovich asked.

“We want the government to give the people what they deserve,” the man said.

An old woman in a thick coat and an old headscarf grabbed his arm. She yelled at him as if it was his fault that all of this was happening. “We need a bigger pension!” she said. “We can’t live on what they give us. We worked hard our whole lives for the Soviet Union, and now we have nothing. It isn’t fair!”

Jesus Josephovich put his hand comfortingly on her shoulder. She became very quiet and wasn’t sure if the foreigner had understood her.

“Who do you support?” the first old man asked. “Which political party are you from?”

“I don’t worry about politics,” Jesus Josephovich said. “I believe that people should follow God if they want to be happy.”

“God?” the old man said. “God is a personal matter. This is politics. Politics affect everybody.”

“Politics and laws are like the tides of the ocean,” Jesus Josephovich said. “They slowly guide a drifting boat in a general direction. But the heart and spirit of a nation is like the rudder of a boat; it can instantly change its direction to the right or to the left. God is the guide for our hearts,” he explained. “New laws and new political ideologies take many years to make major changes in a country, but a new spirit, a new heart, can change the world in a day.”

The protesters were impressed by this statement, but they were not convinced that this foreigner didn’t represent a political party. Somehow, politics were always involved.

“So what does God want us to do?” the woman asked poignantly. “Does he want us to starve to death from these pitiful pensions?”

“I don’t think so,” he laughed. “God wants you to give to each other. To help each other. To love one another,” Jesus Josephovich explained. “If you live only for yourself, you will never have enough, but if you live for each other, you will always have an abundance.”

Another elderly man stepped forward who knew the Bible well. “The Christ said that people should give their money to the poor and that the rich should share their wealth with everyone,” he challenged.

“Oh yes,” Jesus Josephovich agreed. “To live in the kingdom of Heaven you have to give up everything that you have. We will all share everything.”

“So there. You believe in Communism,” said the old man victoriously. “The government takes everyone’s money and spreads it evenly throughout society.”

“The government?” Jesus Josephovich repeated the word fretfully. “Oh no. I would never want the government to take everyone’s money. In the kingdom of Heaven, no one tells people to give their money away. They just do it themselves, of their own giving hearts.”

“But what’s the difference if the government takes my money and gives it to the poor or if I give my money directly to them?” the man argued.

“Isn’t it better to have a law so that I don’t forget to give or lie about it? Surely it is better to be forced to give than to never give at all?” the man argued further.

“It does nothing for your heart and soul if you are forced to give things,” Jesus Josephovich answered. “It only helps you and the other person when the gift is from the heart. The man forced to give and the man forced to receive would be better off with nothing at all, for then they would not deceive themselves into thinking that they were doing their spiritual duty.”

Volodomir had been listening to the conversation and stepped in to help his friend. “Besides,” Volodomir added, “once the government touches the money, you’ll be lucky if one tenth of your gift reaches those it was meant for.” A few people laughed. Others groaned morosely.

“You should give to each other and help each other, but it must be out of love; otherwise you gain nothing from it, and the other person learns nothing from it,” Jesus Josephovich emphasized. “The person who receives will never be happy unless they learn to love other people. You can provide everything in the world for someone, but if they don’t become a more loving person, then what was the point?”

The confused crowd began yelling and arguing about many different topics, and Volodomir started feeling a bit worried for his friend. Then Jesus Josephovich suddenly gave the nearest old woman a big hug and a kiss on the cheek. She began to laugh. The crowd quieted.

“You see,” Jesus Josephovich said to the woman. “It is not laws that are important, but action. Talk is talk, but love is love. Take action. Love someone. That is how you will make a difference.”

The people around her started to talk and giggle.

“Maybe that will work,” she said with a childish grin.

“Let me show you.” Jesus Josephovich began to give strangers on the street a hug and then talk to them about their problems. He soon had a large group of people around him, listening to him. The Communist protesters were impressed.

Instead of yelling and shouting at bystanders, the protesters followed his example and they soon had a large group of interested people standing with them discussing various topics. The entire atmosphere of the rally changed from that of anger and hostility to one of comradeship and understanding.

Volodomir and his family were shocked. “Maybe you should run for President,” Volodomir’s son joked.

Jesus Josephovich laughed. “I thought the Communists didn’t like foreigners,” he said.

Volodomir put a hand on his shoulder. “Stalin was from Georgia and Lenin had Jewish roots. If you can win an election, you’re not a foreigner,” he said. “You’re a comrade.”