Chapter 24 of Jesus Josephovich: The Revolution

Published by RChandlerBrown on July 27, 2013 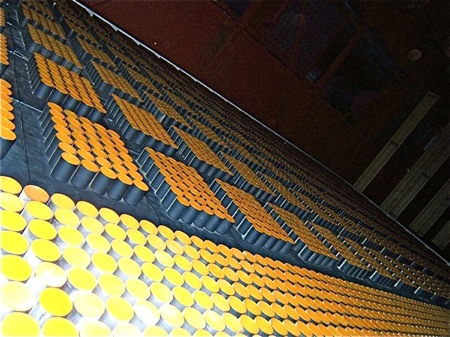 On Saturday, Volodomir took Jesus Josephovich along with his family on a walk in the center of the city. The main street was closed and people were walking along enjoying the winter scene and browsing through the shop windows at clothes that were far too expensive for most of them to buy.

There were many couples walking hand in hand, including the occasional scary old man with a gorgeous young blonde whom everyone knew had to be rich, in the mafia, or a foreigner. Groups of rowdy young men in black coats carrying beers meandered through the streets yelling and making flirtatious remarks to the young women who always walked in pairs and pretended not to listen. Various musicians played the guitar, the violin, or the accordion, enduring the cold winter afternoon in the hopes of earning a few extra dollars and a few moments of stardom. Their music floated down the main boulevard and provided a peaceful contrast to the boisterous vendors with their flashing toys and cheap touristy items.

Volodomir’s family bought some food at the underground shopping center, appropriately called Globus, and then walked around to do some shopping. Katya tried her best to explain all the newest European fashions and to justify the necessity of their extravagant prices. Leosha showed their foreign guest all the most popular movies and music, but he had a difficult time explaining why all the people on the covers of the CDs were wearing so little clothing. It didn’t seem to make much sense in such a cold country.

After a few hours of walking around, Jesus Josephovich parted from the group to try to find a toilet. He walked out of Globus into the underground crossing where dozens of small kiosks and shops lined the walls. He noticed a colorful window that said “Games”. It seemed to be a large establishment, so he decided to see if they had a decent restroom.

When he walked inside, he was amazed to see that the room was filled from wall to wall with large electronic machines. They were brightly colored and were making all kinds of strange sounds. At first he thought they might be video games, like the ones young Leosha played at home, but he soon saw an older gentleman cheer briefly as his machine began to spit out several coins and he realized that this was some form of computerized gambling.

The men playing the games were a strange sight. They sat slovenly at their machines, never taking their eyes off the screen, and pushed the buttons robotically, as if it were a tiresome job rather than a leisurely activity. The air was filled with smoke and smelled of alcohol and sweat, and Jesus Josephovich couldn’t help wondering if he had come to the wrong place to find a clean bathroom.

He was too fascinated to leave, however, so he took a seat next to an older gentleman in a long gray coat and watched him play on the machine. This particular machine was simulating some kind of card game and Jesus Josephovich watched with interest as the man chose his cards and pressed the big red button that would determine his fate.

The man cleared his throat uncomfortably when the strange foreigner sat next to him and started watching his game. He shuffled nervously in his seat and glared at Jesus Josephovich from the corner of his eye, wondering what the foreigner wanted.

Jesus Josephovich smiled brightly. “How does this work?” he asked, intrigued.

The man grimaced and spoke without taking his eyes off the screen. “It’s a gambling machine,” he said, with annoyance. “Just put your money in and press the buttons.”

“That sounds easy,” Jesus Josephovich said. He pulled out a small bill and put it into the machine. The electronic screen flashed several cards. He pushed a few buttons and then pushed the big red button that he had seen the other gambler push to end the round.

Suddenly the machine lit up and made a joyful trumpeting sound as the number of credits increased. He had won.

The man next to him glanced at him jealously.

“They just give you money?” Jesus Josephovich said.

The gambler cleared his throat and sighed. “You don’t usually win,” he said. “There’s a chance you can win a lot of money, but these machines are rigged so that you will usually lose.”

Jesus Josephovich examined the machine with increased interest and pressed the buttons again. He won again.

The man stared at the foreigner’s screen discontentedly. The foreigner had already quadrupled his money.

“If you usually lose, why do you play?” Jesus Josephovich wondered. It was fun to win, but he imagined that losing a bunch of money to a machine couldn’t be that entertaining.

“I have a strategy. I’ve calculated that if I play using my own strategy I can make about $10 per hour, on average,” the gambler explained. “That’s more than I would make in most jobs.”

“Do you actually make that much when you gamble?” Jesus Josephovich wondered. He pressed some buttons on his machine and it began ringing cheerfully once more.

“No,” the man admitted, enviously watching the foreigner’s ever increasing credits. “But sometimes I get close. It’s better than wasting time in a real job though.”

Jesus Josephovich considered his statement. “But at the end of this kind of work, you have nothing to show for it,” he observed.

“But you have nothing of value. Nothing that will last. No new knowledge, no new skills, no pride in accomplishing something great or difficult, no joy in helping another person.”

The gambler frowned. “What does it matter? I only work because I need money,” he said callously. “If I didn’t need money, I wouldn’t work.”

“You think you’d be happier if you never had to work?” Jesus asked.

“Of course,” the man replied. “That would be Heaven.”

Jesus Josephovich shook his head. “Why do people think that God just sits around all day doing nothing?” he asked. “God is the Creator. He’s always creating new things. That is his nature, and we are like him. We cannot be content sitting around doing nothing forever. It is against our nature. Create something. Build something. Help someone. Then you will begin to understand your nature and what will truly make you happy forever.”

The man stared at Jesus Josephovich for a long moment with bewildered eyes. Jesus pressed a few buttons on his machine and won again, for the fourth time in a row. The gambler was astounded.

“If I had your luck, I could be very creative with all that money,” he said, as he watched the foreigner’s machine add up his credits to over $100.

“You know that most people who win money this way lose it just as quickly,” Jesus Josephovich warned. “Most people who become millionaires by winning the lottery end up divorced and unhappy – less happy than when they were poor.”

“I don’t think that would happen to me,” the gambler replied. “If I had a million dollars, I would know what to do with it.”

“And what if you never win?” Jesus Josephovich asked. “What if you just sit here and make $10 an hour? At the end of your life, do you really want to say that you lived every moment for money? Is that a life?”

“Why do you care?” the man said bitterly. “Why are you asking me all these questions?”

“I want you to be happy,” Jesus Josephovich said.

The gambler stared at him and examined his face. The foreigner wasn’t joking.

The man looked at Jesus Josephovich’s machine and saw the amount of money he had won. “You want to make me happy?” the man said. “Push the button for me.”

“If I help you win, you have to promise to stop gambling.”

“Okay, sure,” the gambler said, shrugging his shoulders apathetically. “Win me enough and I won’t have to gamble any more,” he joked.

The gambler watched as the foreigner pressed the buttons and chose a few cards. “Not that one,” the gambler advised. “You don’t want to keep that card.”

Jesus Josephovich shot him a serious glance, and the man stopped talking and put his hands in the air humbly. “Okay. You press whatever buttons you want.”

Jesus Josephovich continued and then pressed the big red button. The machine lit up brighter than it ever had, wild music started playing loudly, and the words “Jackpot” floated across the screen.

The gambler couldn’t believe his eyes. He was so happy he nearly cried. Then he realized that the foreigner might want to take all the money. He looked at Jesus Josephovich with the eyes of a frightened animal, but the foreigner was smiling at him warmly.

“This could be the best thing that’s ever happened to you, or the worst thing,” Jesus Josephovich warned. “Take my advice: give the money away to the first poor person you see. Spend it and you will have temporary pleasure. Give it away and you will have something of lasting value. You will have helped another human being and you will have taught yourself an important lesson.”

A large man in black sunglasses walked over to the gambler and congratulated him. He handed the man a piece of paper that would allow him to collect his jackpot.

As the gambler went to collect his money, the security guard quickly unplugged the two winning machines.

Jesus Josephovich stifled a laugh as he collected his winnings and exited the miniature casino. He hoped that the man would come to his senses sooner rather than later. He also hoped that he could find a decent bathroom soon. But then again, using any public bathroom in Ukraine was a gamble.