Chapter 19 of Jesus Josephovich: The Revolution

Published by RChandlerBrown on July 22, 2013 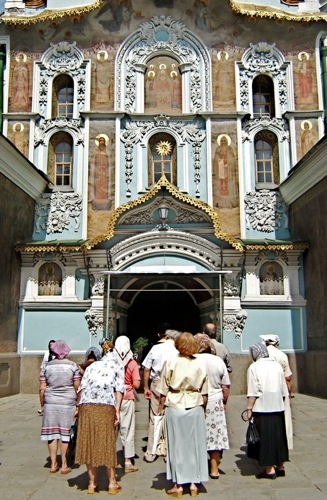 Jesus Josephovich and Andrey Bogdanovich were standing in the hallway of the large meeting hall where the Texas Preacher had just finished his inspiring lesson, during which he had asked for money and donations at least 4 different times.

They were standing by a table of books which had all been written by the Texas Preacher himself. The crowd was quickly dispersing. Now that the spectacle with the giant movie screen and the rock band was over, there didn’t seem to be any reason for the churchgoers to hang around.

Jesus Josephovich couldn’t take anymore. He climbed up onto the table of books and stood tall in the center of it. Some children started pointing and laughing and the woman who was selling the books yelled at him to get down. A crowd began to gather.

“Excuse me,” he said to the crowd. “I noticed that your gathering is quite large and I saw from all the money you gave that you all have a great desire to help other people.”

The crowd grew larger and more people walking out of the main hall noticed the strange foreigner standing on the book table. Andrey was embarrassed and hid himself at the side of the crowd, hoping that no one would ask him about what his companion was doing.

“But can you tell me the name of one person who was helped by today’s service?” Jesus Josephovich asked.

The crowd was uncomfortably silent.

Jesus Josephovich looked at a woman standing near him. “Excuse me, ma’am. Are you poor?”

The woman was stunned. She put her hands up in the air and shook her head.

“Who is poor in this church?” Jesus Josephovich asked.

The crowd was confused. No one knew.

“Who has desperate needs here?” he continued.

The people looked around and whispered to each other, but no one could think of anyone poor in their congregation. They had never thought about it before.

“Surely you must know,” Jesus Josephovich said. “How can you give money to God, yet ignore the needs of your own family? If you claim to follow Christ, then these people are your brothers and sisters, and you should know what their needs are.”

The crowd began discussing this and seemed to be in general agreement.

Jesus Josephovich decided to get more specific. “Are there any mothers in distress? Any widows or orphans?”

An old woman ambled out of the crowd, pushed forward by her granddaughter. She was very old and hunchbacked and she could barely walk even with the assistance of a cane. She shyly stood in the center of the crowd.

“My grandmother is a widow,” the woman’s granddaughter said. “She has trouble walking and she needs help with the most basic things like cooking and cleaning. I help her when I can, but sometimes I have to work and I’m not able to help her for several days.”

Jesus Josephovich stepped off the table of books and took the grandmother’s hand, holding it compassionately in his.

“Who will help this woman?” Jesus Josephovich asked.

“We can clean,” said a teenage girl who was standing with her sister.

“And we can cook,” said a young mother with her arm around her little daughter.

“I can help her fix things in her apartment,” said a young man.

Jesus Josephovich smiled from ear to ear. “Look how simple it is,” he declared joyously. “It doesn’t have to cost a cent to help another person. You throw your money into organizations that claim to help others, because you are afraid of taking the responsibility to help them yourselves. But no amount of money will give you the same satisfaction as scrubbing this kind widow’s floor.”

The crowd giggled and people whispered amongst themselves at the foreigner’s impassioned speech.

“My brother is sick,” said a middle-aged woman. “He has lung cancer and he can’t work. He can’t take care of his family now. They have no money. His wife has to work three jobs to keep them alive.”

Jesus walked over and put his arm around the woman. “Who will help this woman’s family?” he asked. “Who will bring them food? Who will give them a place to stay?”

A middle-aged woman with several children stepped forward. “I know your brother. We live close to him,” she said to the woman. “I can cook them dinner on Tuesdays and Thursdays.”

“I have an apartment that I rent,” said an older man who stepped forward in the crowd. “I can rent it to them for cheap if they need it.”

Jesus Josephovich was getting more and more excited about the crowd’s enthusiasm to help. He was about to find another needy person when the Texas Preacher walked up to him. He had been watching what was happening and wanted to get things back under his control.

The hefty preacher walked up to Jesus Josephovich and stuck his fat hand in his face. Apparently he wanted the rabble-rouser to shake it. Jesus obliged him. Then he gave the preacher a hug. The preacher laughed awkwardly.

“This is great,” the preacher said with his typical charismatic showmanship. “Get the people more involved. I love it. This is just what our church needs. We can organize a group and a schedule for these activities and get everyone helping out.” His big smile and instant enthusiasm were almost enough to make the crowd believe that it had been his idea to do all of this in the first place.

“What do you mean, don’t organize it?” the preacher asked with an ironic chuckle.

“Of course, when it’s for no reason at all. It shows that his love is sincere,” she answered.

“But if we don’t organize everything, then someone who needs help might not get it,” the preacher insisted.

Jesus Josephovich looked at the man who had offered his apartment for rent. “Do you have everything that you need all the time?” he asked.

“And are you still alive?”

“Yes,” he replied with a laugh.

“There will always be needs,” Jesus Josephovich said to the crowd with a grin. “The purpose of cleaning that elderly woman’s apartment is not to remove the dirt from her floor, but to remove the grime from your heart.”

“I couldn’t agree more,” the preacher said, still trying to stay in control. “We’ll make a list of needs then, and whoever can help will help.”

“That would be better,” Jesus Josephovich agreed. He turned and spoke to the crowd. “The point is to serve and love each other, and to learn from these experiences. You can help others every day, and you should, but it must be out of love. Otherwise you gain nothing from it, and they learn nothing from it.”

“That’s right!” declared the preacher. “Give from your hearts,” he said. “If God tells you to help an old woman, you help her. And if God tells you to give all your money to his church, you give him everything you’ve got.”

“And I’m sure that with all that money that you received today you’ll be able to fund all of these new projects and take care of all the people in your congregation,” Jesus Josephovich said to the preacher.

The preacher laughed nervously. “Right, well, you know we have a lot of bills to pay, and rent and salaries and the band and my book tour…”

The people in the crowd stared disapprovingly at the preacher.

“But we’ll see what we can do,” the Texas preacher acknowledged as he jovially slapped Jesus Josephovich on the back.

“I wouldn’t want you to feel compelled to help them out of guilt,” Jesus clarified.

“No, no,” the preacher defended himself. “I would love to give as much as the church can. I just want to make sure that we don’t serve ourselves to death,” he said with a nervous laugh.

Jesus Josephovich smiled. “To serve another by compulsion and without love is the lowest occupation on earth, but to serve another out of love alone is the highest.”

“You know, you’re good with words,” the preacher complimented as he picked up a few of his books which had fallen on the floor and placed them back on the table. “Maybe you’d like to preach here. Do a lesson or two. Speak to my church more about this community project idea you have.”

“No thanks,” Jesus Josephovich said to the preacher. “That’s not necessary. If they want to know more, they can buy my book.” He picked up a Bible off the book table and tossed it at the preacher. “You might want to review it as well.”