Chapter 18 of Jesus Josephovich: The Revolution

Published by RChandlerBrown on July 19, 2013 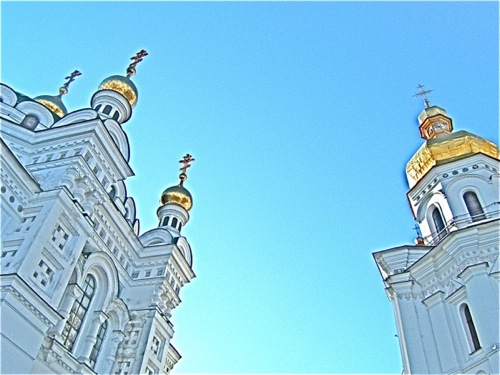 “We still have some time,” Andrey said looking at his watch as Jesus Josephovich hung up the phone. “I am interested to hear what you will say about another kind of church that is very popular here in Kiev.”

“Another church like this?” Jesus Josephovich asked, referring to the Michailevski Cathedral.

“No,” Andrey said. “Very different. This church doesn’t have a building. Not like that one.”

“Interesting,” Jesus Josephovich said. “Maybe it will be more like the churches in the First Century.”

Andrey grinned doubtfully at Jesus Josephovich’s optimism. “It’s a modern church actually,” Andrey clarified. “I think they have an evening service today. We can watch the service and then go and meet with Volodomir.”

They made their way to a large conference hall where a crowd of people was gathered for the service. The lively spectacle was quite different from the quiet solemnity of the orthodox cathedral. There were no headscarves or traditional clothes, no icons or candles for prayer, no altars or hymn books for worship. The only object of interest in the hall was a giant screen above the preacher’s podium that flashed the name of the church every few seconds in different stylized fonts. Everyone was dressed in modern clothes and business suits, young girls wore revealing clothing that would have shocked the icon seller at the cathedral, and the general atmosphere of this religious event was similar to that of going to the cinema with friends.

They sat down near the front in a row reserved for guests and Jesus Josephovich was pleasantly surprised that people were chatting freely and seemed to be in good spirits. He overheard a few conversations: A couple of married women were talking about their children’s school and sports activities, two men in suits were discussing the economy, and a group of older men and women were complaining about politics and the weather. Jesus Josephovich was a bit perplexed that he never heard anyone mention God.

Suddenly the lights dimmed, ingratiatingly airy music blared, and the giant screen behind the podium filled with the image of a bright star floating towards a giant spinning globe.

Jesus Josephovich leaned over to Andrey and tapped him on the shoulder. “Are we going to watch a movie?” he asked.

After the video, which flashed several scriptures across the screen and bright, colorful pictures to show how those scriptures were being fulfilled by this particular group of people, the lights came on and the preacher suddenly appeared on the podium like a magician performing in Las Vegas.

The preacher was a large, fat, boisterous man with thinning hair combed around a shiny bald spot that looked like it had been tanned by the stage lights. He wore an expensive suit with a golden cross hanging from the lapel, and he had thick gold rings on almost all of his pudgy fingers. He was very charismatic and when he spoke in his friendly Texas accent he jumped around and waved his arms in all directions. The man’s movements were so dramatic that Jesus Josephovich almost expected a dove to fly out of his sleeves or a rabbit to jump out of his hat.

The flamboyant Texas preacher started his lesson in English with an Old Testament scripture about money. Next to him was a frail-looking Ukrainian translator in an equally expensive suit who was trying as hard as he could to imitate the Texan’s boisterous style, but it was clear that he was not nearly as passionate about what the preacher was saying as the preacher was.

“God gives to us every day,” the preacher announced.

People in the audience shouted: “Yes he does!”

“But God expects us to give back to him.”

“God wants to give to you,” the preacher promised. “He wants to give you everything you’ve ever wanted! Cars, houses, a good job, nice clothes, a big screen television.”

The crowd laughed and cheered giddily. They were all thinking about the “blessings” that they would like to receive from God.

The audience agreed vocally. They were thinking about how great it would be if God would trust them with a million dollars, and there was not a single soul in the auditorium who doubted that they were in fact trustworthy enough for such a noble responsibility.

After twenty minutes of passionate discourse on money, ushers began passing around beautiful purple and gold baskets in which the patrons began depositing whatever bills they had in their pockets.

Jesus Josephovich noted their generosity with pleasure. “People here are very charitable. Is that money being collected for the poor?”

“What does that mean?” Jesus Josephovich wondered.

“It means that it goes wherever he wants it to go.” Andrey glanced at the preacher’s sparkling jewelry.

After the money was collected, a rock band came on stage behind the preacher’s podium and began playing upbeat soft rock music about God and Jesus.

Jesus Josephovich was shocked. “First a movie, and now a rock concert.”

“What does this have to do with loving God and helping other people?” Jesus Josephovich asked.

“Maybe they believe that if you entertain people enough, they will be willing to do something altruistic every once in a while,” Andrey suggested.

After the brief concert, the preacher came back on stage. This time his face was sad and his eyes were looking up to heaven as if he were in dire need.

“Church,” he said emphatically. “We need some help. We want to send every child in this auditorium to summer camp. This summer camp is going to change their lives forever. You know, if you send your kids to this camp, you may never see them again,” he joked. “Because they are going to come back from this summer camp like new creations, like little prophets and preachers ready to take the Gospel into all the world.”

The crowd laughed and hollered their approval.

“But,” the preacher continued, “to do that we need some help. We don’t have enough money to sponsor all the children, so if God is whispering in your heart right now, and if he’s telling you that he wants you to help a little child know God better, then please open your pocket books and give whatever your heart tells you to give.”

The crowd cheered, and after a few more minutes of somber pleading, the golden baskets were passed around once again. Apparently people still had something left in their pockets to donate.

The service continued and a few songs were sung, which Jesus Josephovich thought were quite lovely, a few announcements were made, and another video was shown. Then, after everything was finished, the Texas preacher came onto the stage one more time. This time he was serious. He had the Bible ready in his hand.

But he didn’t open the Bible. Instead he began to talk about how great it would be if their congregation had a building. He talked about how many parties they could throw, how many concerts they could hold, and how many souls could be saved, if only they had a building of their own.

The baskets were passed around one final time and if anyone had anything left in their pockets it was hesitantly placed into the open mouth of the regal container.

Finally the service was over, but before they could leave, the Texas preacher stood on the stage and reminded everyone to buy a book from the church’s book table outside to help them grow spiritually.

Jesus Josephovich walked outside to the table filled with books and was amazed to see that every book was written by the same person: the Texas preacher himself.

“It’s strange,” Jesus Josephovich commented. “They said a lot of things and collected a lot of money, but I didn’t see a single person who was helped by any of it.”

Andrey noticed a fire in the foreigner’s eyes. Jesus looked like he was about to overturn the tables. “What are you going to do?” Andrey wondered.

“I’m going to actually help someone.”