Chapter 17 of Jesus Josephovich: The Revolution

Published by RChandlerBrown on July 18, 2013 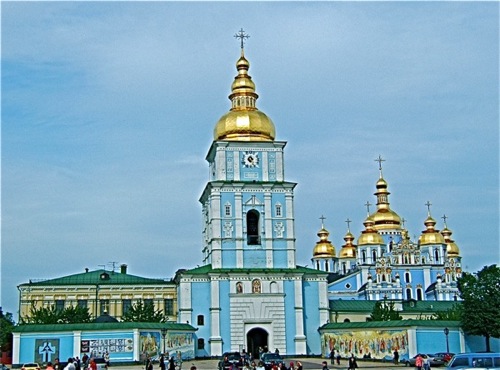 Jesus Josephovich and his new friend, Andrey Bogdanovich, were sitting in a small café near the Golden Gate watching an old beggarly woman be reunited with her family. They greeted the family and then left the café so that the family could be with their grandmother.

“Did you know all of that was going to happen?” Andrey asked, amazed that the woman’s family had walked into the café the moment she had asked God for them.

“You think that was a miracle?” Jesus Josephovich questioned. “That was just good timing. If you simply talk to people about their problems, you’ll often find that most of their problems end up solving themselves. Sometimes miraculously.”

Andrey stared at Jesus Josephovich as they walked, unsure if he believed his explanation. He felt that Jesus Josephovich was hiding some secret from him, or that perhaps he just wasn’t smart enough to understand what Jesus had taught him. They walked around the corner towards Sophievski Square.

As they were walking, Jesus Josephovich noticed the large cross that Andrey Bogdanovich was wearing. “Why are you wearing that cross around your neck?” he asked. “Do you support public crucifixions?”

“No,” Andrey said laughing. “It’s the symbol of Christianity. The cross of Christ.”

“That’s a strange symbol to use,” Jesus Josephovich said as he examined the necklace. “The cross did not have a good connotation in the first century. It was a torture device. You wouldn’t wear one around your neck.”

Andrey was amazed. “What symbol did they use back then?” he wondered.

“A fish,” Jesus Josephovich explained. “It looked much friendlier.”

“Come with me,” Andrey Bogdanovich said. “I want to show you one of our finest churches.”

They walked across Sophievski Square and down the main street to the Michailevski cathedral. Its golden towers were shimmering against the grey-blue sky.

“It’s magnificent architecture,” Jesus Josephovich said. “It reminds me of the temples the Romans built in Israel. What God do they worship in this temple?”

Andrey Bogdanovich stopped and stared at Jesus in disbelief. “What God? The God. The Christian God.”

Jesus Josephovich examined the structure more closely. “They certainly like to use a lot of crosses.”

“You’ve never seen a church like this before?” Andrey questioned.

“Not in person. You know, when I visit a new place, I like to empty my mind of all past impressions,” Jesus Josephovich explained. “That way I feel like I am experiencing everything fully for the first time. Like a child.”

Andrey sighed uneasily and led Jesus Josephovich past the angelic murals and through the massive gates into the cathedral. Before Andrey entered the building, he crossed himself several times. Jesus Josephovich watched him with interest.

“Why did you do that with your hands?” Jesus Josephovich asked.

“We always make the cross when we enter and exit a church,” Andrey explained. “Also when we pray. It’s an orthodox tradition.”

Jesus Josephovich’s eyes grew large. “So many crosses,” he said. “It’s a good thing that they don’t use the fish symbol any more, or there would be fish everywhere.”

They entered the building and Jesus Josephovich was struck by the cold silence. The atmosphere in the cathedral was a strange mixture of reverence, beauty, power, and fear. The walls were covered with colorful shapes, all of which seemed to take on the shape of a cross, and the high domed ceilings were covered by golden carvings and elaborate paintings.

Jesus Josephovich noted the people inside. An old woman was selling icons in the corner while women in traditional headscarves meandered through the pillars placing candles at various shrines and crossing themselves while they said prayers. Everyone went about their worship in almost complete silence.

Suddenly an obnoxious sound filled the cathedral. An intolerably raucous music started playing, echoing off the walls like a hideous scream. Everyone in the church froze and looked around irritably for the source of the irreverent music.

Jesus Josephovich thought it was very strange for someone to play Russian Pop music in a religious temple. He looked around the room to see who the culprit might be. As he searched the room with his eyes, he realized that everyone was staring at him. At that moment he felt a buzzing in his jacket pocket. Andrey elbowed him gently in the side.

“Is that your phone?” Andrey asked with annoyance.

Jesus Josephovich put his hand to his forehead in embarrassment. He felt around in his pocket for the phone that Katya had given him earlier in the morning and erratically pressed buttons until the music turned off. The old women shook their heads and glared irately at the long-haired foreigner with the cell phone.

“Sorry,” Jesus Josephovich said sincerely. “I forgot that the young lady gave me this today,” he whispered to Andrey. “I’ve never had one of these before.”

Andrey tried not to laugh. He took the cell phone and helped Jesus Josephovich turn it off. One of the old women walked up to him and told him angrily to turn off his cell phone after they had already done it. Jesus Josephovich simply smiled apologetically and walked to the front of the cathedral, away from the angry old woman.

All along the front of the church was an altar, two or three stories high, covered with gold painted molding. Set into the molding were sculptures and paintings, most of which depicted a bearded man with a sad face or a somber mother with a surprisingly adroit baby in her arms.

One of the paintings to the left of the enormous altar was centered on an old man with a curly white beard wearing a Greek style robe. Jesus Josephovich looked at it with curiosity.

“Are you sure they worship the Christian God here?” he said, motioning to the image. “That painting looks exactly like Zeus.”

Andrey examined the painting. “That’s supposed to be God surrounded by his angels.”

Jesus Josephovich chuckled. “God doesn’t look anything like that.”

They continued examining the intricate artwork. Every inch of the walls and ceilings were covered by a depiction of a different Biblical character or story. Jesus Josephovich motioned to the walls.

“What are those about?” he asked.

Jesus examined them and wondered why everyone from the ancient Biblical stories that took place in the Middle East looked European.

Jesus Josephovich walked over to a large statue of a man on a cross. The man’s face was lifted up to heaven and looked almost peaceful.

“Is that supposed to be the Christ?” Jesus Josephovich wondered.

Andrey was confused. “What do you mean?”

“That’s not a Roman cross. The Roman’s crucified people on a cross like this: ” He held up his fingers in a capital “T” shape. “There was nothing at the top,” Jesus Josephovich explained. “It’s more painful that way. You can’t rest your head against the wood.”

Andrey shrugged his shoulders. “The Romans were good at killing people,” he said. “They would have liked Stalin.”

They ended their tour and walked back to the exit. As they left, the old woman at the icon table scowled at Jesus Josephovich. She hadn’t forgotten the cell phone incident.

They exited the cathedral and walked out into the square. Across the main boulevard was a massive blue church tower. To the right was a large green cathedral with numerous decorative towers. Jesus Josephovich was impressed.

“There seem to be more temples here than in Rome,” he said. “There must be a lot of different religions in this country.”

Andrey shook his head. “Oh no, those are all Christian churches.”

“Really?” Jesus Josephovich said with surprise. “Why are there so many?”

“Ukrainians like to build churches,” Andrey explained. “It’s one of our traditions.”

“These are magnificent structures,” Jesus Josephovich noted. “It must be expensive to build them all.”

“I’m sure it is. The domes are made of real gold.”

“Why don’t they use that money to help their people?” Jesus Josephovich wondered.

Jesus Josephovich looked up into the gray winter sky. “The Christ said that God no longer lives in temples built by men. Apparently people have interpreted that to mean that they should build bigger and bigger temples.”

Andrey laughed. “Maybe they think that if they build one big enough, then God will be able to live in it.”

“You know, in the first century, the Christians used to meet in people’s houses,” Jesus Josephovich said, as if recollecting a pleasant memory. “They would meet in the kitchen, or on the roof, or outside in a park or on a hill. It was very simple. If they collected money it was for each other, not for gold-plated rooftops.”

Andrey looked at the majestic mural painted on the walls surrounding the cathedral. They were full of proud men wearing robes and donning heavenly halos. In their hands were ancient scrolls and it looked like they were walking on the clouds. They were the spiritual elite.

Andrey pointed to the cathedral. “Do you think that it’s wrong to build churches like this?” he wondered.

“What is necessary?” Andrey asked.

“God… and people who love God,” Jesus said. “God doesn’t live there,” he said pointing at the cathedral. “He lives here.” He pointed at his heart.

Suddenly the cell phone in his breast pocket where his finger was still pointing rang. Jesus Josephovich took out the phone and stared at it.

“You’d better answer it,” Andrey advised. “It might be God.”