Chapter 13 of Jesus Josephovich: The Revolution

Published by RChandlerBrown on July 13, 2013 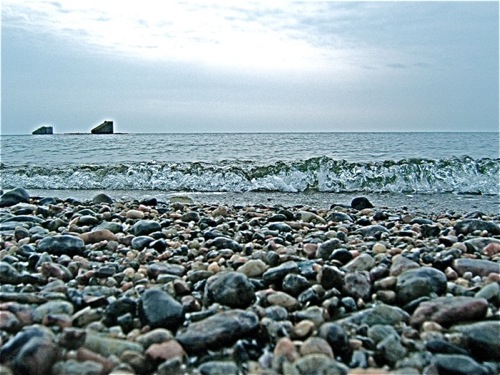 Jesus Josephovich stepped off the mountainous escalator and entered the colossal Metro chamber. All he could see in all directions were people’s heads moving in swarms to and from the escalators and the Metro trains. A sound like thunder was rolling in the distance and an unnatural wind from deep in the tunnels tossed his hair in all directions. It felt as if a storm were coming.

He was pushed forward by the mob of people beneath a decorative arch and found himself on the edge of a long platform teeming with anxious travelers. The people on his right stared at his long hair and bushy beard and when he noticed them they pretended to look at a large clock on the wall at the end of the platform and then turned in the other direction and stared into the long black tunnel.

At the end of the tunnel a small light appeared. The wind began blowing again in great swirls and a thunderous noise rose from the darkness. As the machine hurtled through the tunnel towards them, Jesus Josephovich found himself being pushed closer and closer to the edge of the platform by the ever-growing crowd. He looked behind him at the living ocean of people that were about to pour into the train. There was no possible way for all of these people to get onto one train. Or so he thought.

The Metro train approached and an obscenely loud horn blared at the awaiting crowd. The wind reached its maximum velocity as the train sped past them and Jesus Josephovich had to dodge a large yellow mirror that was sticking out obtrusively from the side of the train as he was being pushed ever closer to the edge.

The train slowly lurched to a stop and the crowd began pushing all around him. Old women carrying baskets and bags were positioning themselves trying to get in front of him and be the first ones on the train. The atmosphere was tense, as if a race were about to start. But as the train stopped, Jesus Josephovich was confronted with a terrible reality: the train was already full.

In that brief moment before the doors opened Jesus Josephovich realized what was about to happen to him. In front of him, smashed against the doors and windows, were hundreds of passengers packed so tightly together that it was not possible to believe that a single extra person could fit into the wagon.

The doors opened and the train exhaled as hundreds of passengers flowed out through the door. Jesus Josephovich was unfortunately standing directly in front of the opening door, and as the people poured out of the train they ran into him with the force of a tidal wave and spun him in circles until he had been pushed back several feet into the waiting crowd.

Before the Metro train had finished emptying, the people closest to the door began pushing their way inside. The crowd flowed as one into the train and Jesus Josephovich found himself picked up and deposited in the center of the wagon by the sea of people.

At one point he tried to stop, for he had found a comfortable place to stand, but the moment he stopped moving he felt an overwhelming push from behind him. He turned around expecting to see a giant muscular athlete, but what he found was a sour-faced, heavyset grandmother shoving her way into the center of the wagon with a pair of bags in her hands that were as old and wrinkled as she was.

Jesus Josephovich found himself standing rather uncomfortably in between two large men in black leather coats and the old woman with her heavy and obtrusive bags. In front of him were a few older women and a plump businessman sitting on the few seats lining the side of the train. They sat with pride in front of the crowd of jealous onlookers who were hoping that at any moment a seat might open up. When a seat was free, the passengers fought their way through the crowd for it so that they could sit down and relax while everyone else was tortured by the pressure of the bodies all around them; the heat, the smell, and the unpredictable swaying of the train.

Finally the train car was filled to capacity and Jesus Josephovich was ready for his first trip on the Metro, but the crowd did not stop pouring in. There was a loud groan as the crowd outside began frantically pushing each other to get onto the already overcrowded train. They did not want to miss their chance to get on, otherwise they would have to wait two or three minutes for the next train, and most of them were already late for whatever meeting they had to attend.

The crowd rammed itself further and further into the train, smashing those already inside. People began yelling and an old woman shouted something unkind to no one in particular as she was crushed against her neighbors. Where Jesus Josephovich had been standing relatively comfortably with three other people, there were now six people smashed together, and Jesus Josephovich could not stand up straight because someone’s bag was preventing his feet from moving in the direction that his torso was being pushed.

Finally the shoving stopped and doors began to close. As the door closed, those left outside pressed themselves against the doors and held them open long enough to squeeze themselves onto the train. When the doors had almost fully closed, one more impatient man crushed his body between them and pulled his arm through the door just as the train started to move.

When it was all finished, Jesus Josephovich found himself hanging from the metal bar across the seats leaning only a few centimeters away from the agitated woman sitting in front of him. There were people pressed against him on all sides and he understood, perhaps for the first time, what a sardine must feel like when shoved into a can with twenty of its friends. Then the sardine can began to shake.

The train lurched forward and Jesus Josephovich, not ready for such a sudden sideways movement, fell onto the man next to him. The man stared at him irritably and helped him stand up straight by pushing him with his elbow.

“Sorry,” Jesus Josephovich apologized, but it was too loud in the train for the man to hear him. The screeching sound of metal on metal drowned out all other noise, except for the obscenely loud metal rock music that was blaring from the headphones of a young teenage boy behind them.

After a minute or two, Jesus Josephovich figured out how to lean back and forth as the train tilted and swayed left and right and forwards and backwards and he was able to stand without falling over. He looked around the car and noticed a small television above his head. On the screen a little dog was chasing its own tail, making hilarious circles as it tried to bite itself. Jesus Josephovich saw this and began laughing out loud.

“That is really funny,” he shouted as he laughed at the comical clip. He looked around, but no one else on the train was laughing. They were all staring at him. He smiled innocently and the other passengers looked away awkwardly.

In front of him on the window he noticed a large map of all the Metro stations. He studied the map and tried to figure out where he was going. The woman sitting below the map became apprehensive and pulled her purse closer to her as the strange foreigner with the long hair and beard leaned over her to stare at the map above her head.

Just when he thought he knew where he was on the map, the train suddenly stopped and threw him in the other direction against another large man in a black leather coat. Jesus Josephovich pulled himself back up onto the metal hand-bar and apologized once again.

The train lurched forward and slowly came to a stop at the next station. The crowds poured out and in the same way they had before, but this time Jesus Josephovich stood solidly where he was and didn’t let himself get pushed into such an uncomfortable position. When the train started moving again, he felt confident that he was getting used to riding on the Metro.

At the next station, the seat in front of him freed up and he quickly sat down. He took a deep breath and relaxed his aching arms which had been tightly holding onto the metal bars for nearly ten minutes. He closed his eyes for a moment and collected himself. When he opened his eyes, a feeble old woman was standing in front of him staring enviously at his seat. Her severe eyes judged him harshly.

Jesus Josephovich quickly stood up and offered the old woman the seat. Her face brightened and she sat down with exclamations of praise for the kind foreigner. The train suddenly moved as he was exchanging his seat with the frail grandmother and Jesus Josephovich was once again tossed into the man next to him. He apologized for the third time in as many stops.

The old woman grinned and started a conversation with him. “Thank you,” she said. “You are a kind man. Where are you from?”

“From Israel,” he said. “I’m visiting Ukraine to learn about the people here.”

“They’re wonderful,” he said truthfully. “Some things are a little difficult to figure out, but the people have been very helpful.”

Jesus Josephovich nodded in agreement. “Yes. But sometimes I think that when they feel like sardines they forget how good they really are.”

He looked around at the hard faces of the passengers around him. They were completely unaware of how important they were.

The old woman smiled. “Where are you going now?” she wondered.

“To the Teatralna Metro Station,” he said. “It should be the next one I think.” He looked at the map on the window. “I hope it’s the next one. Riding on these trains is exhausting.”

The gentle old woman laughed. “Oh no,” she said. “Teatralna isn’t this way. It’s in the other direction.”

Jesus Josephovich looked at her confusedly, not fully comprehending her words.

“You’re on the wrong train.”