Chapter 12 of Jesus Josephovich: The Revolution

Published by RChandlerBrown on July 12, 2013 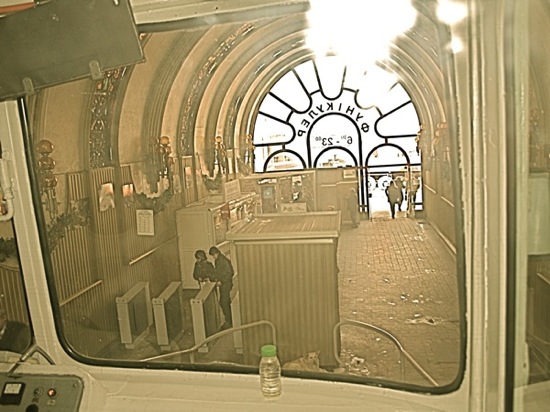 Jesus Josephovich accompanied Lena on her errands and wherever they went he reminded her to think eternally. It was very difficult for her at first, because she was so focused on the tasks at hand, but after a little instruction she was soon learning to think of the people she met not as animals, but as eternal beings. Most of them.

In the middle of the afternoon, Lena received a phone call from one of Volodomir’s friends who was anxious to meet Jesus Josephovich. She drove him to the nearest Metro station and gave him instructions on where to meet.

“Take the Metro four stops to Teatralna and get off,” Lena instructed. “He will be waiting for you on the platform.”

“Call me if you have any problems.”

Jesus Josephovich waved goodbye and headed down into the Metro. The station was a large domed structure with heavy swinging doors on either side. As he entered the station, the person in front of him pushed the door open forcefully and it swung back and hit Jesus Josephovich in the chest. He was stunned for a moment, but the people behind him started pushing and yelling at him to go inside so he quickly pushed the door open and walked into the station.

The station was a large round room that funneled the crowds through several barriers onto two large escalators. He followed the crowd through the turnstiles, but as he tried to walk through, the barriers suddenly closed inches from his leg. He ran into them and almost fell over the turnstile. A large woman in a blue uniform yelled at him from the end of the barrier.

“Use a token,” she shouted angrily.

Jesus Josephovich put his hands in the air innocently and pushed his way through the crowd towards the uniformed woman. She was shaking her head crossly. “A token,” she shouted again, as if she were reprimanding a school child. “You need a token.”

She pointed to an opaque window covered with signs and cards. There was a tiny opening where money and tokens were hastily being exchanged. He took the woman’s hand and thanked her earnestly. She smirked and shook her head as the foreigner walked over to the line for tokens.

The line was very long and people were pushing from the back and from the sides to reach the tiny window. Jesus Josephovich noticed that the transaction was typically so fast that the buyer and the seller rarely even spoke to one another. Usually the buyer simply placed a small bill on the counter and it was instantly replaced by a few blue tokens. When words were exchanged they appeared unpleasant. The women behind the window seemed to be irritated by every request that took more than 10 seconds to perform.

The worst exchanges seemed to be those that involved large bills. A man in a handsome suit gave the woman 100 grevens, which was far too large a bill for some metro tokens, and the woman spitefully asked him for a smaller bill. When he said that he didn’t have anything smaller, she yelled at him some more and then gave him the largest pile of small bills and change that Jesus Josephovich had ever seen. The man was upset at having to carry such a large pile of coins and small bills and requested something larger, but the woman would not cooperate. The man walked away muttering something offensive under his breath.

Eventually Jesus Josephovich made it to the front of the line. “How much is a metro token?” he asked pleasantly.

“Fifty kopecks,” she yelled. She pointed her finger severely towards the small sign on the window that listed the prices.

Jesus Josephovich searched through his pocket for the money that Volodomir had given him. People behind him in line were pushing forward and he could feel that they were getting more and more anxious and frustrated with every second that he stood there. An old man started mumbling something about how long it was taking. He finally found a small bill and handed it to her.

“How many?” the woman asked.

“How many do you think I need?” he inquired.

The woman grabbed the bill and handed him ten metro tokens. Jesus Josephovich took them and smiled kindly. “Thank you” he said. The next person in line pushed in front of him.

Jesus Josephovich walked over to the turnstile and inserted his metro token. The light turned green and he walked through, but to his utter surprise the barrier shut on him again. The woman in the blue uniform almost threw a temper-tantrum.

“On the left!” she shouted incredulously. “Walk through the left side.”

Jesus Josephovich raised his hand to thank her as he realized his mistake. He put the metro token into the slot on his right side and walked through the left side. Finally the barrier did not attack him and he made it through.

He followed the mass of people down the largest set of moving stairs that he had ever seen. He was amazed by the size of the underground tunnel and marveled at its architecture.

As he looked all around him, he realized that he was the only person enjoying the view. Everyone else was standing still staring at their feet or at the people on the other escalator which was going in the opposite direction. The people on the other escalator were all staring at him with his long hair and bushy beard. He smiled and waved, but they looked away immediately as if his friendly acknowledgment had been an offense.

He turned to the old man that was standing next to him. “This is amazing,” he said. “Do you take the Metro every day?”

The old man looked at him strangely. “Of course. I have to. It’s the cheapest way to get around. The marshrutka prices are going up, gas is too expensive, and the government doesn’t want to increase our pensions enough so that we can live like decent human beings. I’ve even heard that they want to increase the price of the Metro. Then what will we do? Walk?”

Jesus Josephovich hadn’t understood most of what the old man said, but he knew that he was complaining. Old men loved to complain, especially if it was about money and politics.

“God loves you,” he said to the old man.

The old man wasn’t sure what to say. He chuckled nervously.

“Do you believe that?” Jesus Josephovich questioned.

“Yes,” the old man said instinctively, but without conviction.

“Do you believe that the government loves you?”

The old man laughed again. “The government? Love me? I don’t think so. They don’t even know who I am.”

“I love you,” Jesus Josephovich said without hesitation.

The old man cringed and took a step back. He looked very uncomfortable and didn’t know what to say.

Jesus Josephovich shrugged his soldiers lightheartedly. “You don’t love me?” he asked.

The man’s eyes became very large and his face animated. “What do you mean? How can I love you? I don’t even know you.”

Jesus Josephovich looked down into the tunnel. “If I was going to fall down these stairs,” he suggested, “would you catch me? Would you try to save my life?”

The man paused. “Because. It’s the right thing to do. I don’t want you to die.”

“If you saved my life, then I would consider you a close friend. Closer than a brother,” Jesus Josephovich declared. “And I would tell everyone that this is a man who truly loves me.”

The old man chuckled. “Well I guess then you could say that.”

“I already know that in your heart you would want to save my life,” Jesus clarified, “so let’s assume that I was going to die and that you have already saved me. Now we are brothers.”

Jesus Josephovich extended his hand. The old man shook his hand nervously and nodded in agreement, understanding that this foreigner was talking about life on another level. He was going deeper than the old pensioner was prepared to consider.

He looked down to the bottom of the escalator. They still had a long way to go. Together they descended into the depths.