Chapter 10 of Jesus Josephovich: The Revolution

Published by RChandlerBrown on July 10, 2013 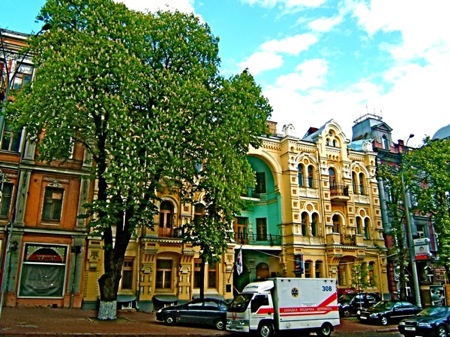 Jesus Josephovich and Volodomir escorted their new African friend back to his hostel. They exchanged numbers and the young black student thanked them heartily for their help. While they walked back to the apartment they discussed Volodomir’s ideas about the revolution.

The next day Volodomir headed off to work and once again left Jesus Josephovich in the care of his daughter Katya. Katya took Jesus Josephovich with her to buy him a mobile phone on her way to her University. She was not excited about the prospect of having to escort this strange looking foreigner around the city. She certainly didn’t want any of her friends from the University to see her with him.

As they were walking to the shop, Katya got a call from a friend. After a brief conversation, she hung up the phone and made a frustrated screeching noise, like an angry squirrel, and started walking so fast that Jesus Josephovich couldn’t keep up with her.

“Is it a problem with one of your friends?” Jesus Josephovich probed.

“Friends, class, family, work – everything is a problem,” she said, almost out of breath.

Katya laughed. “No, this is normal. You don’t want to see me when I’m really stressed.”

Jesus Josephovich stopped walking. Katya continued forward and then noticed that her companion was not with her. She turned around and saw him standing a ways back looking around at his surroundings. She walked back to him irritably.

“What are you doing? We are in a hurry,” she yelled. She grabbed his hand to pull him with her, but he didn’t move.

“I want to show you a principle of the universe,” he said. “I think it will help you.”

Jesus Josephovich calmly laid down in the middle of the sidewalk and closed his eyes.

“Jesus Josephovich!” Katya shouted like an angry mother. “What are you doing?”

“Jesus Josephovich, get up right now!” She looked embarrassedly around her at the crowds of disapproving onlookers. “Your clothes are getting dirty.”

An old woman walked up and asked what was wrong. Katya didn’t know what to say. A large man in a leather jacket stopped and tried to help them stand Jesus Josephovich up on his feet, but it was no use. He simply slumped back to the ground. He wasn’t moving.

“What happened?” the first officer asked.

The crowd looked at Katya. “I don’t know,” she admitted. “He just laid down for no reason and now he’s not moving.”

“We can’t wake him up,” the old woman chimed in. “I think you should call an ambulance.”

The officers checked his pulse, questioned a few more people, and learning nothing of importance, they decided to call in an ambulance.

The ambulance arrived a short time later. Katya was busy on her cell phone calling everyone she knew to explain why she would be late to class and to ask for advice about what to do. The emergency crew checked Jesus Josephovich’s pulse and couldn’t find anything abnormal.

“What’s wrong with him?” they asked.

No one could give them an answer.

The emergency crew put him in the ambulance, hooked him up to the machines, and said they were going to drive him to the hospital so that a doctor could look at him. Katya told them his name and information about who to contact and then she called her dad, Volodomir, and told him where they were taking Jesus Josephovich. Volodomir told her that he would take care of it, and Katya, totally confused by what had happened, continued on her way to her University courses, even more stressed out than before.

At the hospital the doctors were equally confused. Everything was completely normal and the patient seemed to be in excellent health. No one could understand why he wasn’t moving. One doctor even suggested that maybe he was just a very deep sleeper. Another said that he was probably a drunk.

Eventually Volodomir came to the hospital, and since the doctors couldn’t determine that anything was wrong with the patient, they allowed Volodomir to take him home. Volodomir paid for the hospital bill and then brought Jesus Josephovich back to his apartment.

They laid Jesus Josephovich on the sofa and covered him with blankets, wondering what had happened. Soon after, Katya came home from her courses and looked in on their comatose guest.

At the sound of her voice, Jesus Josephovich opened his eyes and sat up.

“You see?” he said to her matter-of-factly.

She froze and glared at Jesus Josephovich. “You mean you did that on purpose?” Katya screamed. “What were you thinking? You’re crazy!”

“Yes. You got put in the hospital,” Katya answered, “but they should have put you in an institute for the mentally insane!”

“But look where I am,” Jesus said. “I simply closed my eyes and I ended up back here at your home. It is where I am supposed to be right now. It may have taken a little while longer to get here than if I had simply walked home myself, but I still ended up where I needed to be.”

“You’re here because I talked to the police and called my father and the hospital and I tried to save your life!”

“Yes,” Jesus Josephovich acknowledged. “But even if you hadn’t, I still would have ended up here eventually. We are all on a path. Even when we do absolutely nothing, we are still on the path. We are always moving forward.”

“Oh yeah?” Katya said, frustrated but intrigued. “How fast are we moving?”

“Well,” Jesus Josephovich said to himself. “Einstein said we are always moving at the speed of light in the direction of time.” He looked up towards the ceiling as if he was doing a calculation in his head. “He’s almost correct.”

Katya threw her hands in the air. “I can’t handle this right now!”

“You are still stressed,” Jesus Josephovich noted. “You shouldn’t worry so much. You will meet the right person.”

“How did you know about that?” Katya said abruptly.

“About what?” he said innocently.

“How did you know that I was having problems with my boyfriend?” she asked seriously.

“I didn’t know,” Jesus Josephovich claimed. “But love is one of the great questions in all of our lives. We think about it endlessly day and night, we become stressed out over it, and we make bad decisions because of our fears regarding it.”

Katya silently stared at him with a guilty look on her face.

“But God has a plan for all of our lives. He has the right person, the right job, the right friends all prepared for us, if that is what we need. If we are patient we will see that we are already on the path. It is when we lose faith and become afraid and we try to create our own paths that we get in trouble. Then life has to force us back on the right path by taking away what we’ve built on the wrong path.”

Katya scowled and folded her arms. It was the one answer she didn’t want to hear.

“Your life will always be moving forward on the path whether you want it to or not,” he said. “You just need to try your best to enjoy the trip.”

“Did you enjoy your trip in the ambulance?” Katya asked mockingly.

“Actually I did,” he said. “It reminded me of another time when everyone thought I had died.”