Chapter 9 of Jesus Josephovich: The Revolution

Published by RChandlerBrown on July 9, 2013 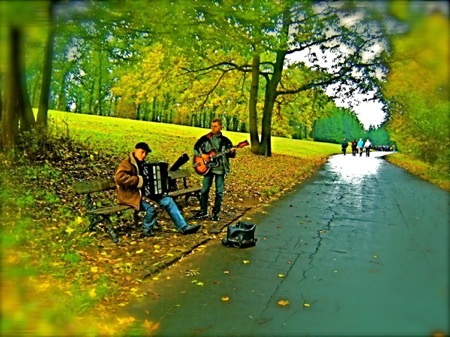 After a few more rounds of virtual fighting with Volodomir’s son Leosha, Jesus Josephovich sat down to dinner with the family. Elena presented them with so much food they could have fed a dozen guests. He ate borsch, potato cakes, vereniki, chicken cutlets, salad, and thin pancakes with chocolate for desert. It was, as Volodomir had promised, much better than his lunch at the fast food restaurant.

When the dinner was over, Katya explained to her father why Jesus Josephovich was still wearing his robe. Volodomir was not surprised when he heard that his foreign guest had given his new coat to a homeless beggar.

Volodomir opened his closet and let Jesus Josephovich try on some of his own clothes. He dressed him in a comfortable t-shirt, a warm sweater and jeans.

“The coat was a gift to you, so you can give it to whoever you want to, but these clothes are on lease,” Volodomir noted. “I need them back, so please don’t give them away.”

Jesus Josephovich bowed his head respectfully. “I will do whatever you wish of me,” he replied.

“Let’s take a walk,” Volodomir suggested. “I would like to talk to you more about what you said to me earlier.”

Jesus Josephovich agreed and they headed out of the apartment building and walked to a pleasant park nearby. They sat on a bench and watched the stars appear in the night sky.

“And what have you discovered?” Jesus Josephovich asked.

Volodomir rubbed his hands together nervously. “I think it was a combination of things. First, we were united because we had a common enemy,” he said.

Jesus nodded. “The quickest way to unify a people is to give them an enemy. Unfortunately, we usually choose as our enemy other men who have the same desires as we have.”

“That’s true,” Volodomir said with a grin. “Secondly, we knew in our hearts that we were right, and that what we were doing was good. It was simple. It wasn’t complicated. It was obvious that this was the right thing to do, and the more people we met and talked to who agreed with us, the stronger we all felt about it. Secondly, with everyone’s help, with the people unified together, we really believed that we could do anything. But it didn’t feel like it was just us doing this thing. It felt like some greater force was moving through us. The unified power of good had to defeat what was wrong. It just had to.”

“Righteousness has a strength in itself that all other powers are incapable of defeating,” Jesus Josephovich declared. “To destroy what is right and good and true is to destroy the very foundation of life. Nothing can stand which destroys truth, because truth cannot be destroyed. Such a thing destroys itself.”

“I understand that,” Volodomir stated. “But what I really want to know is this: why was I able to love those people so quickly and so strongly? How was I able to feel like all these people were my brothers and sisters without ever having met them? How can I feel that again?”

Jesus Josephovich was about to answer when they heard loud laughter at the other end of the park. They looked across the park and saw a group of young men with shaved heads harassing a young black student wearing a backpack and carrying books. The skinheads pushed the black student from behind and his books scattered onto the snow.

Jesus Josephovich stood up, but Volodomir grabbed his hand. “It is better not to interfere,” Volodomir advised. “I’ll call the police.”

The foreigner looked him in the eye. “Do you want to be a brother to all men?” he asked. “Then come follow me.”

Jesus Josephovich walked over to the group of skinheads who had surrounded the young black student, kicking his books around the snow.

“Go home, monkey boy,” one of them shouted as he kicked the black student’s backpack. The young men laughed brashly.

“Can I help you boys?” Jesus Josephovich asked. “Did this man cause you harm?”

The group of young men stared at Jesus Josephovich and laughed. “Get out of here,” they said. “We’re just protecting our country.” They laughed again.

Jesus Josephovich looked down at the black student. He was sitting in the snow shaking with fear and frustration.

“Okay,” Jesus Josephovich said. “But before you do anything, let me ask him three questions.”

“I hope you speak African,” one of the boys teased. “Booga, booga, booga,” he yelled, acting like a monkey. They gathered around and watched.

“What is your name?” Jesus Josephovich asked the African student.

“Where are you from?” Jesus Josephovich continued.

“I’m from Nigeria,” he said in Russian with an African accent.

“Nigger!” one of the boys yelled mischievously.

Jesus Josephovich ignored them. “Why did you come to Kiev?” he asked.

The student took a deep breath. “I am here to study to become a doctor,” he said.

“A monkey doctor?” one of the boys asked mockingly.

Jesus stared at the boy, motioning for him to continue.

“My grandfather is a doctor in Nigeria. He raised me and my sisters after my mother died. I had a father, but he died from malaria when I was very young.”

The boys quieted down and began to listen to the student’s story. Jesus Josephovich knelt beside him, listening carefully to every word.

“My mother’s sister helped our grandparents raise us,” Abraham continued. “We were very poor and I had to start working after school when I was 8 years old to help us buy enough food. My grandfather was a good man. He helped a lot of people in the community and he would visit sick neighbors after work and help them for free. I wanted to be just like him. I wanted to help my community and help other children so that they would not lose their mothers in childbirth like I lost my mother when she gave birth to me.”

The skinheads had become completely silent. They listened uneasily to his story.

“I studied very hard, and even though I had to work after school, I still made the best grades in the class every year. I was accepted to medical school here in Ukraine. I was very excited because the medical schools here are much better than the Universities in my country. It was like a dream come true, because now I have the chance to become a well trained doctor like my grandfather and I’ll be able to really help people.”

Jesus Josephovich looked at the skinheads and smiled. He nodded his head for the student to continue.

The young student sighed anxiously. “But life in Ukraine has been difficult for me. The language is very difficult to learn, it is hard for me to understand other people, and it is hard for them to understand me. It is difficult to make new friends. I live in a hostel with many other students, and my things are often stolen. I work and study all night, but I only have a little money, and most of it I send back to my aunt in Nigeria to help her and my grandparents buy food.”

Jesus Josephovich was now staring at the group of young boys who were all standing around apprehensively.

“But Ukrainian culture is very different from ours,” Abraham continued. “People here rarely see black people, and they stare at me wherever I go. I try to ignore the stares, and the angry glances, and the names and bad words that some people yell at me. Sometimes people push me and hit me because I have dark skin, but I never hit them back. I try not to go outside after dark, because many of the other foreign students have been attacked. But I try not to think about it, because I just want to become a doctor. I don’t care about anything else.”

The young African student was close to tears as he finished his story. Jesus Josephovich grasped his hand and hugged him. Then he stood up and looked at the group of skinheads.

“Okay,” Jesus Josephovich said to them. “Do whatever you think you should do.”

The boys looked at each other, turned around guiltily, and left. Jesus Josephovich and Volodomir helped Abraham pick up his books and wipe the snow off his backpack.

“I guess you weren’t the enemy that they were looking for,” Jesus Josephovich stated nonchalantly.

Jesus Josephovich looked at Volodomir and asked, “So how do you feel now?”

Volodomir was still shaking with angst. He thought he was going to have to fight the skinheads and the tension had not yet left his body. He noticed that Jesus Josephovich was perfectly calm.

“I’m terrified,” Volodomir admitted. “But I’m happy,” he said. “Thrilled.” He looked at Abraham. “I have found a new brother.”