Chapter 8 of Jesus Josephovich: The Revolution

Published by RChandlerBrown on July 8, 2013 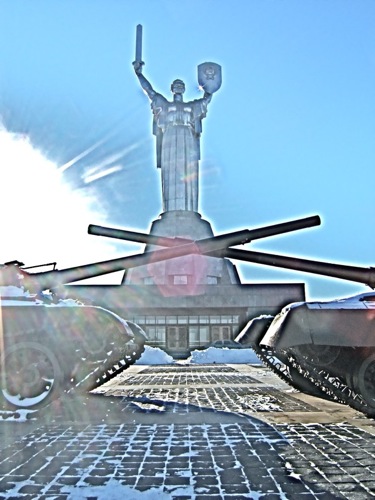 Katya and Jesus Josephovich took a taxi across the city to Volodomir’s apartment. Katya was very upset that the strange forienger had given away his new Italian coat to a homeless drunk, and no explanation would calm her down.

“He was cold,” Jesus Josephovich tried to explain. “And he really needed some confidence. He has a tough road ahead of him.”

Katya screamed. “I bought you that coat because you were cold! It is not polite to give away presents. Especially five minutes after they’re given to you.” Her face turned red. “If you didn’t like the coat, you should have told me before I bought it.”

Jesus Josephovich realized the problem. “I’m very sorry,” he apologized. “I loved the coat. It was in fact the most comfortable coat I had ever worn. I saw someone who needed it more than me, but I did not realize that giving it away would hurt your feelings. If I had known that I would have given him my robe.”

Katya looked at Jesus’ robe, under which he was wearing nothing, and she shook her head with disgust. “No, no! Please don’t take off your robe!”

Finally they reached Volodomir’s apartment. The building was an ugly old gray box with decaying wooden balconies and peeling paint. The elevator was broken, and after a long walk up six flights of stairs they reached a large red door with the number 40 written on it. Katya unlocked the door and led them inside.

In contrast to the dilapidated exterior, the interior of the apartment was bright and cozy. It was small, but comfortable and well decorated. Katya hung up her jacket and frowned at Jesus Josephovich. As they walked past the kitchen, Volodomir’s wife greeted them. She was busy cooking three different dishes, soup, and a salad, but she found a moment to pause and introduce herself.

“So you’re Jesus Josephovich,” she said with poise. “I’m Elena. Volodomir’s wife. Please sit down and I will bring you some tea.”

“I’m almost finished with dinner. I’m just one potato short. Katya, could you run downstairs and buy me a potato?”

Jesus Josephovich reached into his robe and unrolled the potato that the old woman had given him at the market from its hiding place. “Here,” he said, handing her the potato. “This is for you.”

Elena was surprised and happily took the potato. “How did you know I needed a potato?” she wondered.

Katya led their guest into a large room with couches and a television. Excessively flashy music videos were blaring on the television and a young teenage boy was playing on a computer in the corner of the room.

The boy waved his hand without taking his eyes off the computer screen. “Hello,” he said disinterestedly.

“I hate computer games,” Katya declared. “I’ll be right back,” she said as she left the room.

Jesus Josephovich walked over to the boy and watched him shooting at enemy soldiers. Leosha dodged a few bullets, jumped over a fallen log, and shot his enemy in the head at pointblank range exploding blood onto the screen. The game congratulated him.

“Are you a soldier?” Jesus Josephovich asked.

The boy was annoyed by the stupid question. “Yes,” he said. “I’m killing Nazis.”

The boy was annoyed by the guest’s presence hovering over him, and not being able to fully enjoy the slaughter, he took his eyes off the screen and looked at the stranger for the first time. He was very surprised to see a Middle Eastern foreigner standing a few feet away from him in an ancient looking robe. He was so surprised that he forgot about his game and an enemy grenade landed next to his character blowing him into several pieces.

“Who are you?” Leosha asked.

“I’m Jesus Josephovich. I’m a friend of your father’s.”

“Where are you from?” the boy wondered. “Iraq?”

“Near there,” Jesus Josephovich replied. “So are you training to be a soldier?” he asked the boy, referring to the game.

“No,” Leosha said sharply. “It’s just a game. I play online with my friends.”

“So you don’t want to be a soldier?” Jesus Josephovich questioned.

“Not in Ukraine,” Leosha emphasized. “Our army isn’t like this. In our army, you’re more likely to get killed by one of your own soldiers than by the enemy.”

“Because we aren’t fighting anybody,” the boy explained. “We are Ukraine. Our soldiers don’t have anything to do.”

“That is a bad situation for a soldier,” Jesus Josephovich noted. He looked at the game. “How many hours a day do you spend fighting these fake wars?” he asked.

Jesus Josephovich glanced at the television where two young rappers in a Ferrari were surrounded by girls in bikinis.

“Would you ever kill a man in real life?” Jesus Josephovich asked.

The boy was surprised by the question, but eager to answer. “Sure. If he threatened me or my family, I think I could do it.”

The boy was ready with an answer. “It’s justified if it is in self-defense.”

Jesus Josephovich nodded at this typical answer. “What if I told you that God created men to be warriors,” he said. “But what if I also told you that there was never a good reason to kill another man, no matter what?”

The boy thought about this contradiction. “I would say it doesn’t make sense. How can you be a warrior if you have nothing to fight against?”

Jesus Josephovich smiled. “Maybe we do have something to fight against, but maybe it isn’t other men.”

The boy nodded in agreement. “I’ve always thought that killing other people was wrong, but sometimes it seems like you have to do it.”

“The greed,” the boy acknowledged. “If they weren’t so greedy, then we wouldn’t be fighting at all.”

“So you see,” Jesus Josephovich said. “There are things inside of men that we must fight against. Greed, selfishness, impurity, hatred, debauchery, deceit, and all the things that harm and enslave mankind. But we cannot fight these things with bullets,” he clarified. “War only creates more hatred and greed and violence. We need to fight another kind of battle.”

“What kind of battle?” Leosha wondered.

“A spiritual battle,” Jesus Josephovich explained. “A battle against the true enemy of mankind.” He looked Leosha in the eye. “Do you want to be a spiritual warrior?”

Jesus Josephovich put a hand on his shoulder. “Every warrior knows that he must destroy the weakness within himself before he can fight the enemy. It is the same with a spiritual warrior. To know the spiritual enemy, you must find him within yourself and destroy him. Then you can understand it and know how to defeat it in other men.”

“But I don’t want to train. I want to fight,” the boy declared.

“Of course you do,” Jesus Josephovich laughed. “But if you don’t want to train, then you can’t be a soldier. Not in the real world, and not in the spiritual world.”

“Good,” Jesus Josephovich said. “Then let’s begin your training. Turn on your game.”

Leosha quickly returned to his computer game and entered the battlefield. He started shooting at the enemy and Jesus Josephovich took the mouse away.

“What are you doing?” the boy yelled. “I’m going to get killed.”

“That is the first lesson,” Jesus Josephovich said. “Your body is nothing. This is a spiritual battle, not a physical battle. Your physical body is meaningless.”

The boy sighed reservedly as his character was shot dead several times.

“Now,” Jesus Josephovich ordered. “I want you to play, but when you die I want you to smile. Never get angry. When you feel the anger welling up inside of you, try to laugh instead. Kill the anger. Love the enemy. They are men like you. Have fun.”

Leosha nodded and engaged himself in his new task.

Katya walked into the room and saw Jesus Josephovich leaning over her brother, intently watching the computer screen, and congratulating the young warrior on his successes. She grunted angrily. “Not you too!”