Chapter 7 of Jesus Josephovich: The Revolution

Published by RChandlerBrown on July 7, 2013 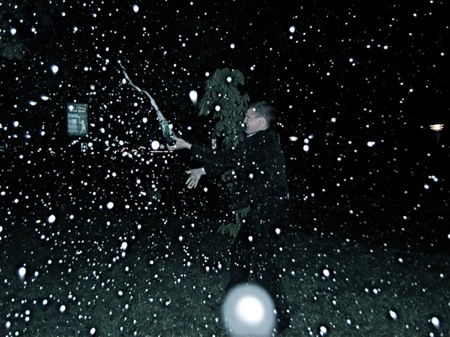 Jesus Josephovich walked onto Khreshatik boulevard sporting his new Italian coat and a pair of shiny black leather shoes. He didn’t feel any more confident or powerful in his new clothes than before, but he certainly felt warmer. The snow crunching under his feet no longer crawled in between his toes, and the winter wind was fully halted by the coat’s cashmere lining.

Katya was proud of her new creation. Instead of a homeless bum, her foreign friend now looked like a Middle Eastern businessman. If she could get him a haircut and chop off his overgrown beard, he might actually pass for a regular guy. At least he wouldn’t look so much like an Islamic terrorist.

They walked down Khreshatik admiring the beautiful buildings and lights. Katya pointed out all the most popular and expensive shops and restaurants, while Jesus Josephovich watched the people strolling past. Some of the pedestrians were in a rush and walked rapidly with their heads down, but most appeared to be meandering around the city center without any particular destination. The women were all overdressed in fur lined jackets and hats of every color and style, traversing the icy sidewalk with absurdly high-heeled shoes, while the men were almost indistinguishable in their black coats and blue jeans.

At the end of the street they reached a large square surrounded by austere buildings and massive, gaudy billboards. Two giant angels stared across the square at one another, one from atop an ancient gate and the other crowning the precipice of a monumental column more than a football field apart.

“This is Independence Square,” Katya announced.

Jesus Josephovich was impressed. “This is where the revolution happened?”

Jesus Josephovich breathed in deeply and tried to feel the spirit of the place.

Katya’s cell phone rang. Her ring tone was an extremely loud sample of Ukrainian pop music. It hurt Jesus Josephovich’s ears. “Wait here,” Katya said as they reached the end of the square. “I’m going to get us a taxi.” She walked off and answered her phone.

While Katya marched back and forth talking vapidly on her cell phone, Jesus Josephovich took a look around and noticed a poorly dressed man huddled against a staircase and sipping on a bottle of vodka. Jesus Josephovich walked over and sat down next to him on the stairs.

The homeless man stared at him in shock. He answered robotically, “My name is Ivan Andreyevich.”

Jesus Josephovich didn’t mind the homeless man’s stares and he relaxed against the wall, completely at ease. “This is a beautiful place,” he said admiring the square. “Were you here during the revolution?”

The homeless man chuckled. “Of course I was. People were handing out free food and drinks. It was better than Christmas.” The man took a swig from his bottle.

“Do you live here, in this square?” Jesus Josephovich asked.

“Why? Do you want to send me a letter?” Ivan teased. “I live wherever the police don’t kick me out. But I like it here. People give a lot of money here.”

“What do you do with the money? Do you buy alcohol?”

“Of course,” the bum retorted. “What should I buy? Coca-Cola?”

“Why do you drink?” Jesus Josephovich wondered genuinely. “Does vodka make you feel good?”

“It deadens the pain,” Ivan Andreyevich stated. “So yes, it makes me feel good.”

“What pain?” the bum said sarcastically. “Life. You know, I’m really just trying to make it to tomorrow. From one day to the next. That’s all.”

“Where is your family?” Jesus Josephovich asked.

“My family?” he said, his voice cracking painfully. “My family,” he sighed. “They’re gone. They’re gone,” he said mournfully. “I had a wife once. I was a soldier in the Soviet army. I wasn’t a great soldier, but I was proud. I worked as hard as the other men and I lived a normal life. We had a small apartment and we lived. We lived.”

“The Soviet Union collapsed. I lost all my money. I didn’t get paid for over a year. I quit and found another job, but it didn’t pay enough to pay the bills. I sold our apartment and tried to use the money to start a small business, but my partner stole the money and disappeared. Then prices for apartments shot up. I couldn’t afford to buy another apartment. We had to leave the city. I got depressed. I was always a heavy drinker, I had been in the army and we all drank, but I started drinking at night alone. I felt ashamed. Then my wife left me. She said I couldn’t take care of her and our son. She said I was a useless drunk. A useless drunk!” Ivan started crying.

“Look at me,” Ivan said. “I tried to work and I failed. I’ve tried to stop drinking a hundred times and every time I’ve failed. What can I do? I am no good to anybody. I’m useless. She was right. I’m useless.” He slumped against the wall like a rag doll and took a big sip of vodka inbetween his sopping tears.

“Can I have some?” Jesus Josephovich asked, looking at the vodka bottle.

The homeless man stopped crying and stared at him incredulously. He burst out laughing. “Sure. Take as much as you want.”

“Look,” Jesus Josephovich said as he took a sip. “You are already happier. Why?”

“Because you made me laugh. You’re crazy, man. Who are you?”

“Friends? What friends do you think I have?” Ivan declared. “If my own family can’t stand the sight of me, what kind of people would want to be my friend?”

“I want you to do something for me,” Jesus Josephovich requested.

The homeless man squinted nervously. “What?”

Jesus Josephovich looked him in the eye. “Every night, I want you to take your bottle, find another homeless man, and drink it with him.”

Ivan considered the idea. “I can do that.”

“Everything,” Jesus Josephovich emphasized. “Don’t try to forget your problems, talk about them. Don’t hide them in the darkness where they can grow in strength. Bring them into the light where they can be seen for what they really are. Talk about them until their strength is gone.”

“If there’s one thing that vodka is good for, it’s talking,” Ivan joked.

“Every week I want you to find another friend to drink and talk with, until you have a group of friends that can talk and support each other. A family. Okay?”

Jesus patted him on the back and stood up. He took off his jacket and wrapped it around Ivan Andreyevich. “Here,” Jesus Josephovich said. “You look cold.”

“What are you doing? I can’t take this,” Ivan clamored.

Ivan Andreyevich noticed Jesus Josephovich’s robe after he had removed his coat. Suddenly he realized who he was.

Jesus smiled and put his finger to his lips. “Shhh,” he said. “Don’t tell anyone.”

Jesus Josephovich walked away quickly and found Katya waiting for him next to a taxi.

She froze when she saw him in his robe. “Where is your coat?” she asked in a panic.

“I gave it to that homeless man,” he said calmly, pointing to the stairs.

Katya flashed him an icy glare and screamed. “You what?!”