Chapter 5 of Jesus Josephovich: The Revolution

Published by RChandlerBrown on July 5, 2013 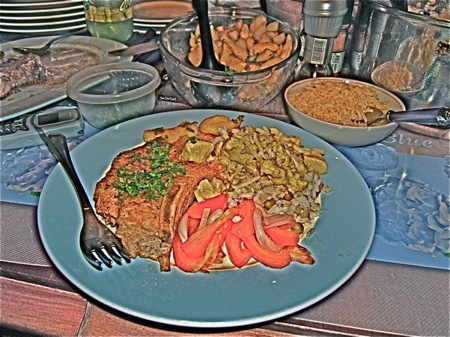 The businessman took Jesus Josephovich through the shopping mall and into a large restaurant with big golden letters. Jesus hid the potato that almost got him arrested by rolling it into a ball on the side of his robe. Inside the restaurant the tables were all full and there was a long line at the counter to order food. Jesus Josephovich was surprised by the number of people there and how they all pushed and shoved to get around each other. It seemed like every place he went people were pushing to get in line.

“This is a popular place,” he said. “They must have excellent food here.”

The businessman laughed. “No. This is just fast food. It’s not very good, but it’s fast. I would take you somewhere better, but I don’t have much time unfortunately.”

They stood in the long line and Jesus stared at the giant pictures of food. There were all kinds of strange dishes that he had never heard of before. People from the front of the line were making their way through the crowd carrying trays full of big, brightly colored cartons of fries, burgers, drinks, and exotic looking desserts.

He examined the giant menu on the wall again and tried to find something familiar to eat. “What’s a nugget?” he asked.

“It’s a piece of chicken, but cut into a small ball and covered with fried bread.”

Jesus Josephovich made a disinterested face.

“Maybe it would be better to get a hamburger,” the businessman suggested.

“Don’t worry. I’ll order for you,” the businessman decided.

As they waited in line, people began gathering behind them. Jesus Josephovich was surprised at how close to him people were standing in line. They were forcing their way into the line from all sides, and if Jesus and his new friend didn’t stand as close as possible to the people in front of them, then the other customers would try to cut in front of them. There was no courtesy in this line.

The man behind them stood less than an inch away from Jesus Josephovich, so close that Jesus could almost feel his breath on his neck. He turned around and smiled at the man who was standing so close behind him, thinking that the man wanted to say something, but the man ignored him. Jesus Josephovich smiled at him and the man looked away quickly and started typing text messages into his cell phone.

Finally, they ordered their food, which, amazingly, was delivered to them in less than a minute after they ordered. Jesus Josephovich wondered how anyone could cook food so quickly, but a quick sniff told him that the food was not fresh. They pushed their way through the crowd and found a seat where two young girls were just leaving.

“What is your name?” the businessman asked after they sat down. “I’m Volodomir.”

“My name is Jesus Josephovich.”

Volodomir paused and considered the name. He watched Jesus Josephovich’s face for a sign that he might be joking, but he saw none. “Thank you for coming to lunch with me. It is not often that I get to talk to foreigners here in Ukraine. From the way you are dressed it looks like you have just arrived in our country.”

“It’s true,” Jesus Josephovich replied. “This is my first day in Ukraine.” He looked at his hamburger, opened it and looked at what was inside. He turned it around several times, tried a small bite, and then put it down on his tray.

“Did no one tell you that it is winter in our country?” Volodomir joked.

Jesus Josephovich blushed with embarrassment. “Where I come from it is always warm. I haven’t seen snow in a long time.”

Volodomir stared at his clothes and tried to analyze his pronunciation. Jesus Josephovich spoke Russian perfectly and without an accent, but it was clear that it wasn’t his native tongue. He spoke it too perfectly, with none of the slang and slurs of real language.

“Thank you. I speak many languages,” Jesus Josephovich said matter-of-factly.

“Are you a philologist? A linguist?” Volodomir wondered.

Jesus Josephovich bobbed his head from side to side, saying yes and no at the same time. “I study people. Human interaction.”

“A psychologist?” Volodomir suggested. “Or an anthropologist?”

“Sometimes I feel like a little of both. But mostly I am a storyteller.”

“A writer?” Volodomir asked with interest.

“I don’t actually write any of my stories down. Sometimes people write them down for me, but I usually just speak in public,” he clarified.

“Ah, so you’re a professional speaker? A professor perhaps?”

“I don’t have an official degree,” Jesus Josephovich admitted, “but I have spoken in many places. Although, if I had to give my profession a name, I would say that I am a professional listener. I find that when I talk to people, they often end up saying much more of interest to me than I say to them.”

Volodomir nodded in satisfaction. “So why did you come to Ukraine?”

Jesus Josephovich’s face lit up with excitement. “Ukraine is a very interesting place in the world today,” he explained. “It is at the edge of modern society, but it still has ancient roots. In many countries, modern change has brought bloodshed and chaos, but here in Ukraine something special has happened. For a brief moment the people were united and with peace they brought about great change.”

“Oh, you mean the Orange Revolution?” Volodomir said, his face becoming dull. “It didn’t really change very much, our Ukrainian revolution. The country is still basically the same.”

“Were you there?” Jesus Josephovich asked. “At the revolution?”

Volodomir’s eyes lit up as he remembered. “Oh yes. I was there. I was there with my two brothers. They came all the way from Lviv to join the protest. We camped out in tents in the snow for 3 weeks. It was an amazing time.”

“What was it like being there?” Jesus Josephovich asked. He stared deep into Volodomir’s eyes as if reading something inside them.

“I can’t tell you what it was like. It was too powerful for words,” Volodomir stated. “Imagine hundreds of thousands of people smiling and laughing and so full of hope that you believed anything was possible. We didn’t even know why we were there exactly. We didn’t know what was going to happen. We just knew we wanted to be there, and we wanted to make a difference.”

“A difference in what?” Jesus Josephovich asked.

“It didn’t matter. In anything,” Volodomir said passionately. “We just wanted to change something, together, for the better. We were cold and hungry and tired, but we were happier than we had ever been in our lives. I could grab the man next to me, a total stranger, and we could become best friends in an instant. We all felt like brothers. We would have done anything for each other. It is impossible to describe that feeling. It was like nothing I have ever felt before.”

Jesus Josephovich smiled. “I have known a time like that. A time when people’s love for each other was so great that they would do anything for one another. Even die for each other.”

“That’s what it felt like,” Volodomir exclaimed. “For me, the politics are not important any more. When I remember the revolution, I remember those feelings. That sense of brotherhood. That’s what was important.”

Jesus Josephovich took Volodomir’s hand and held it between his. “Now you understand the great change that I speak of. It is not the change of governments, or the change of politics or laws. It is the change inside of each individual man – that miraculous moment when a man becomes more than a man. When he becomes a brother. A brother to all men.”

Volodomir stared at Jesus Josephovich and something like a fog lifted from his mind. A new sensation of hope and clarity flowed through him. “Can you help me find that feeling again?” he asked.

Jesus Josephovich smiled. “It is my goal for every man to live every day with that feeling.”

Volodomir slapped his hand on the table. “Tonight, you will stay at my house.”

Jesus Josephovich nodded his head and looked at his hamburger. “I accept,” he said. “But only if you promise that your wife’s cooking will be better than this.”